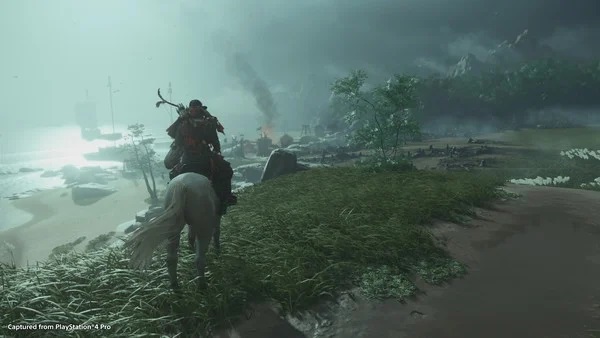 While exploring the world of Ghost of Tsushima, you’ll need to rely on your trusted steed, Nobu, more than anything else. In this Ghost of Tsushima guide, we’ve detailed everything you need to know about unlocking your horse, accessories, controls, and maneuvers while on a horseback.

Your horse, Nobu, can help you roam around the island rather quickly. You’ll also be able to fast travel across the in-game world using your steed. In order to call your horse, press left on the D-pad and press R2 to mount it.

You’ll unlock Nobu at the very start of the game where you’ll be asked to choose a horse for a quest. You can also unlock different skins for Nobu while playing the game. We’re still in the process of compiling the list and will update it in the coming days.

While on a horseback, you’ll be able to find and collect materials rather quickly as opposed to being on foot. Similar to Roach from TW3: Wild Hunt, Nobu in Ghost of Tsushima can’t die. If you’re attacked, Nobu will make a run for it and you’ll need to call it again once the combat sequence ends.

You can also perform aerial assassinations while on horseback. Since assassinations can only be attempted while you’re undetected, this is something you need to keep in mind.

Unlike TW3: Wild Hunt, saddles in Ghost of Tsushima don’t have any real effect and are cosmetics only. This, however, remains to be confirmed and will have more information to share in a few days.