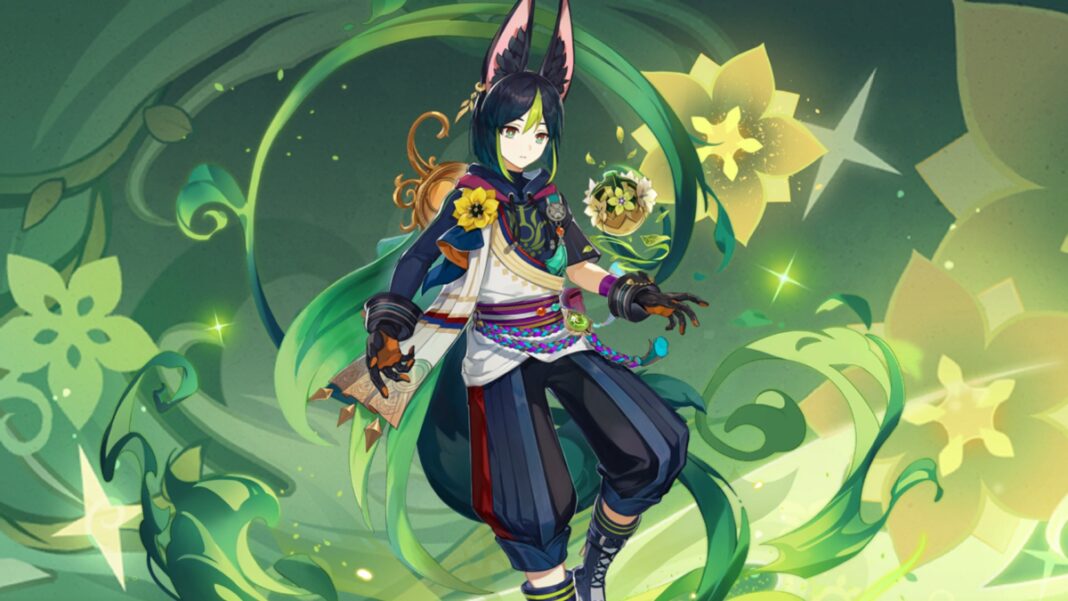 Tighnari is a new Dendro bow user added to Genshin Impact as part of update 3.0. Since this is one of the three confirmed Dendro characters at the time of writing, we recommend getting one. In this Genshin Impact guide, we are going to go over the best build for Tighnari including weapons and artifacts.

The following is the build that we recommend for Tighnari in Genshin Impact:

Skyward Harp is going to be one of the best weapons that you can use. It increases critical damage by 20% and hits have a 60% chance of creating a small AoE that deals 125% physical damage. This effect can take place once every 4 seconds.

You can also go with the Amos’ Bow. This increases normal attack and aimed attack damage by 18%. It also increases damage by 12% for every 0.1 seconds that an arrow is in flight. This can stack up to 5 times for each arrow.

Another 5-star weapon that we can recommend is the Aqua Simulacra. It increases HP by 16%. When there are enemies around you damage is increased by 20%.

If you do not have these 5-star weapons then we recommend the Hamayumi. It increases normal attack damage by 16% and charged attack damage by 12%. Once the character’s energy is maxed, these effects are increased by 100%.

Stringless is another 4-star weapon that works well. It increases elemental skill and burst damage by 24% and since this is a 4-star weapon you can easily refine it to increase the stats.

We recommend the 4-piece Deepwood Memories set. This increases Dendro damage by 15%. Once you use your elemental skill or burst the Dendro resistance of the affected enemies will reduce by 30% for 8 seconds.

Alternatively, you can use the Wanderer’s Troupe set. This increases elemental mastery by 80 and charged attack damage by 35%.

We recommend getting elemental mastery or attack% on the sand piece, Dendro Damage Bonus on the cup and crit rate or crit damage on the hat.

This is the build that we recommend for Tighnari in Genshin Impact. If you want to learn more then you can check out our guide on all the materials that you need to max level Collei.