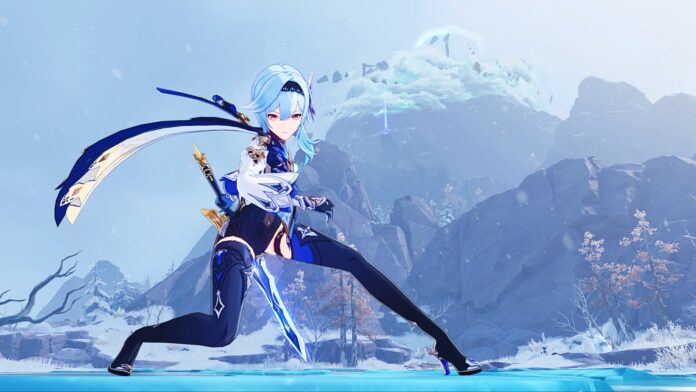 Eula is back in Genshin Impact update 2.3. In case you missed her last time, you can get her now. You will need to build her right in order to make the most of her. In this Genshin Impact guide, we are going to go over the best build for Eula and recommend some weapons and artifacts for her.

The following is the build that we recommend for Eula in Genshin Impact:

Song of Broken Pines is the best weapon that you can get for Eula. It has physical damage bonus as the secondary stat which is ideal for her kit. The passive perk of the weapon increases attack and attack speed significantly. This is a 5-star weapon, so you will need to spend your Primogems on the weapons banner in order to get it.

Another great 5-star weapon that we can recommend is Wolf’s Gravestone. It has attack% as the secondary stat and it increases attack by 20%. Hitting enemies that have less than 30% HP increases the attack of all party members by 50% for 12 seconds.  So not only does it buff the character that is using it but the rest of the team as well.

If you are a low spender then you can go with the Serpent Spine that is included as part of the battle pass. It has crit rate as the secondary stat which is great for dealing high amounts of damage consistently. Every 4 seconds the character is on the field, the unit will deal 6% more damage and take 3% more damage. This can stack up to 5 times and the stack is reduced by 1 when damage is taken.

Alternatively, you can go with Snow-Tombed Starsilver. This is a craftable weapon so you can max refine it without spending Primogems. The weapon has physical damage bonus as the secondary stat which is ideal for Eula. Hitting an enemy with this weapon has a chance of dropping an icicle that does AoE attack damage. The chance of that happening and the damage of the icicle increase with each refinement.

Another craftable weapon that you can go with is Prototype Archaic. It has attack% as the secondary stat and when you attack with this weapon there is a 50% chance of dealing an additional 240% damage to enemies in a small AoE. This damage% is increased with each refinement and at max refinement deals 480% attack damage. This effect can only occur once every 15 seconds.

We can recommend going with the Pale Flame set. This increases physical damage bonus by 25% and when the elemental skill hits the enemy attack is increased by 9% for 7 seconds. This effect can stack twice can occur once every 0.3 seconds. Once max stacks are achieved the 2-piece effect is increased by 100%. For this set, you need HP on the flower, attack on the feather, attack% on sands, physical damage bonus on the cup, and crit rate or crit damage on the hat.

This is the build that we recommend for Eula in Genshin Impact. If you are interested in learning more about the game then you can check out our guide on what you need to level up Gorou.