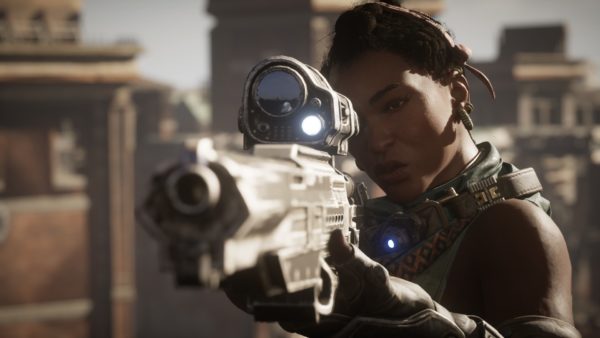 Our Gears Tactics Sniper Class Guide will help players with the best abilities for this class of soldiers and how to best utilize this class in combat.

Sniper class is one of the most useful classes in Gears Tactics when players have leveled them up. As the name suggests, the Sniper relies on a long-range weapon.

Not only that, they have very high accuracy and a higher chance of scoring a critical hit. Like all the other classes, Sniper has four development paths or skill trees which include Marksman, Hunter, Assassin, and Stalker.

Best Abilities, How To Play

Given that Sniper Class is best when it’s at a range, try giving the Sniper height advantage too. So place this operator in a high spot as whenever possible.

As for the best skills, grab the “Fast Fingers” first. This ability adds an action point for killing or finishing off an enemy with a shot. Use this ability on weakened enemies so that the extra action point can be used to attack stronger enemies.

“Chain Shoot” ability will also come in handy if players are looking to increase their action points.

This ability adds two action points for just hitting an enemy. Given that, Sniper doesn’t move much on the map, they can better utilize the extra action points to attack enemies.

That is all for our Gears Tactics Sniper Class Guide with tips on the best abilities and how to play with this class. For more on the game also see our Support Class Guide and Heavy Class Guide.