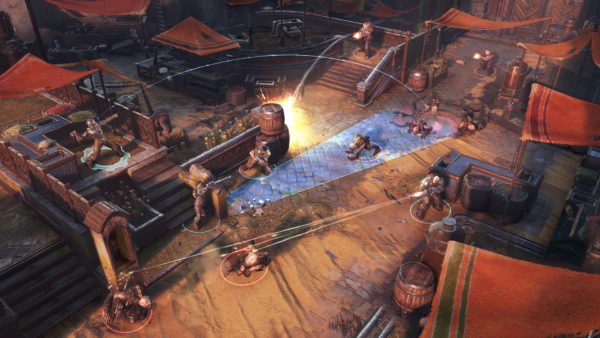 We will start off with my favorite enemy type in Gears Tactics, the Wretches, these little creatures are easier to kill than others which makes them my favorite because others are a pain in my backside.

The best part about the Wretches is that they have low health which makes them an easy to take down enemy unit in Gears Tactics. They look like little bugs and they try to do melee damage whenever possible. The Wretches will also seize the opportunity to perform a melee attack whenever you are in melee range. You can take down packs of these enemies by using a frag grenade or overwatch. The trick is to avoid being overwhelmed by them.

Hammerburst Drone is my second favorite enemy unit in the game. Mainly for the same reason as Wretches. They are easy to kill in Gears Tactics. If you have a bayonet you can easily rush them and go for the kill. Hammerburst Drone uses rifles that do a good amount of damage if there multiple targeting you at the same time. While they are easy to take down, do not take them lightly in they are in numbers. Being overwhelmed by them is an easy recipe for disaster. They are extremely annoying during boss fights so pick them off as early as possible.

These are powerful enemies in Gears Tactics. Grenadiers use shotguns that do a lot of damage to your units. One shotgun blast will cut your health down to 25 to 30%. Grenadiers have an opportunity attack so they will blast you if you get too close. The best way to kill a Grenadier enemy unit is with Vanguard’s Lancer. It may take multiple shots before the Grenadier unit goes down in Gears Tactics.

If I had to name one enemy unit that is extremely annoying, it is Sniper Drone. This enemy unit doesn’t have a lot of health but its pinned ability will pin your units in place. It is next to impossible to rush them during battle so your best bet is to have your own sniper unit that can take them down. Otherwise, it becomes really hard to get close to them and attack. The pinned ability targets only one character at a time. The one who is targeted will have limited movement range and gets damaged significantly if it moves.

Now we are getting to the tougher enemy units in Gears Tactics. Boomer is an enemy unit that is slow but uses the Boomshot launcher that can blow you away. It takes a lot of firepower to take them down and heavy class is most effective against this enemy. The Boomshot launcher has great range and arcing shot so be very careful when Boomers are on the battlefield. The good news is that once you manage to kill one you can use the Boomshot yourself. The weapon is quite useful against bosses like Brumak and Hydra.

Tickers will explode when they come near you and in most cases, your soldier will die. The good news is that you can kick the Ticker back into an enemy mob before it explodes. They are great if you want to clear adds, you can use their explosion against their own friends. You will need to have the Ticker kick ability though. You can also shoot them and cause an explosion. Keep in mind that Ticker will charge you if you miss a shot, it is easier to kill them with Overwatch ability.

Theron Gaurd enemy unit is not something to take lightly. They are one of the most dangerous enemy units in Gears Tactics. The unit uses Torque Bows and their ability to make units vulnerable which means your unit will take 25% more damage. The bow shoots explosive projectiles to do AoE damage. You can pick up the weapon from a Theron Gaurd corpse. It has two firing modes. High Power Shot will shoot in a straight line and does a lot of damage, accuracy is an issue. Low Power Shot allows you to aim freely but does low damage.

Kantus isn’t a direct threat to your allies but since it gives your enemies buffs it can quickly become annoying. As long as Kantus is alive you will be wasting a lot of action points and ammo. As soon as you soon it on the battlefield focus fire on the Kantus and kill it. Once it’s down all buffs will be removed.

Disciple is a tough enemy unit Gears Tactics. Its attacks have a staggering effect so when you take a hit you will be pushed out of cover and overwatch will be interrupted. Once you manage to kill one of these units, a cloud of poison will form around the corpse which negatively affects your damage output for at least two turns. It is best to not use executions against this enemy unit and focus on killing with guns or other types of ranged weapons.

You will come across this enemy type toward the end of the game before you face the Hydra in the campaign. It has the same poison cloud as the Disciple unit in Gears Tactics. It charges you to perform melee attacks and also has an opportunity attack which makes your character confused and unable to use abilities for two turns.