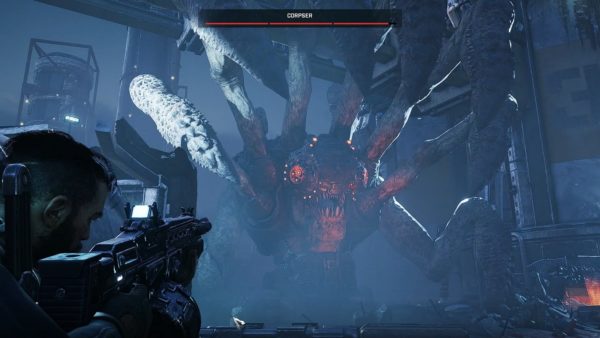 This is one of the hardest boss fights in Gears Tactics. You need to be on guard at all times and keep your focus when facing the Corpser in Gears Tactics. There are some things you need to know first. It takes 4000 damage to break his left shield which is not worth it at all since he opens up before each attack anyway. Next are the Corpser Abilities:

To beat the Corpser in Gears Tactics you need to understand its attacks very well. Also, using grenades won’t do anything to the Corpser despite the boss is vulnerable to explosive damage in the fight. You need to take down the Boomers and grab their grenade launchers to use in the boss fight against Corpser. It is highly important that you bring support units with health stim abilities, you’re gonna meet them. Use the reset tokens in the character customization menu if Gabe doesn’t have these abilities.

It will take a long time to beat Corpser so sit back. At the start of the Corpser boss fight, your Gears Tactics squad will be behind the central raised platform, and the boss will have two disciples and two Wretches will it. You need to get the high ground by positioning up on the central platform. It’s not a bad idea to place Mikayla on the back right side, a few feet from where the team started. This will allow her to cover the right and horizontal lanes. Usually, the boss’s first attack is down the middle which can split up the squad. Before you split, keep in mind that the E-hole will open in the lower right section of the map, in from of the big truck.

The E-hole is going to spawn two Wretches and one Boomer. Kill the Boomer and get its rocket launcher to attack the Corpser. The boss will trigger its mines and if you are not in the danger zone there is nothing to worry about. In the next turn, two Grenadiers and five Wretches will appear from the right side of the map. Once you reach the next phase, another E-hole will appear from the left side, bringing a Boomer and two Disciples. Expect another wave of Grenadiers and Wretches. You need to hold ground and make sure you have plenty of healing with you. You will get overwhelmed a number of times while trying to beat the Corpser boss fight in Gears Tactics.

You need to be clever with your angles and avoid being slammed by the boss. Spread your squad in a way that they aren’t exposed and grouped up. If you are going to attack its legs, wait for the slam for the shields to open up. At one point in the boss fight no more adds will appear so you can focus on the Corpser and just avoid its mines. When the time comes, shoot the crane on top of its head to beat the Corpser once and for all in Gears Tactics.

Having trouble killing Burak? Check out the Burak boss guide or head to the Gears Tactics Wiki for more helpful guides.