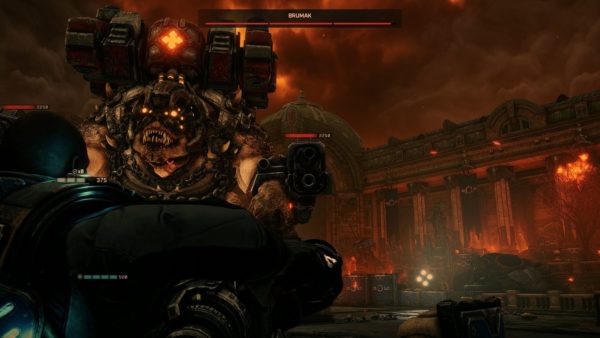 Looking for some tips and strategy to beat Brumak in Gears Tactics? You have come to the right place. In the Brumak boss fight guide, we will discuss tips and tricks you need to know to win.

This is the very first Boss Fight in Gears Tactics. Brumak is a giant beast Locust that utilizes the rocket launchers strapped to its back to attack your units. Moreover, it has giant feet that stomp everything in its path. To beat the Brumak boss fight it is important that you max out each squadmate’s turns. During this boss fight, you not only need to keep Brumak busy to avoid being stomped while also defending your units from Wretches and Hammerburst Drones.

The following are the Brumak Abilities that you need to be aware of.

The boss fight kicks off with two squadmates in the street, below the position you took at the end of the bridge mission previously. Other members of your squad will be at the opposite end. Avoid being inside the red circle where the missiles would land. In a couple of turns, an E-Hole will open up at the north side of the map. You use two squadmates to Overwatch the E-hole. However, be careful if the boss decides to target you first as you won’t be able to use a frag grenade on the hole because missiles will be raining down on you. Defend yourself from the Locust and use one teammate to target the canisters on the back of Brumak. Targeting its canisters will deplete its health bar. When the Brumak is targeted from the back he will turn around which then exposes it to other squadmates. You can land two to three shots per turn but make sure Locust aren’t standing in your way. If you have an extra shot in your turn, target the Chaingun.

There are two areas that you should avoid, the sandbagged bunker close to the blue fortified wall, and the second one is the street corner at the end of the blue wall on the map. You can easily get pinned in these areas and even attacked by Wretches. You can die easily in this boss fight and lose squadmates. You only need to beat the Brumak to complete this boss fight in Gears Tactics.