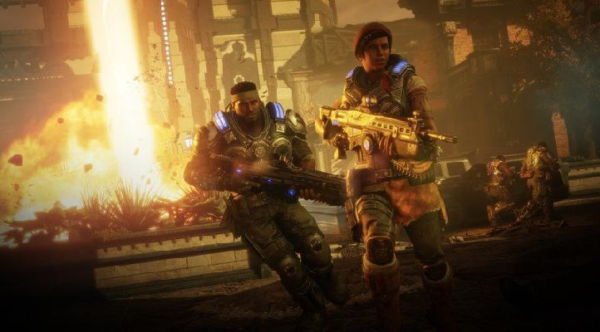 Our Gears 5 Weapons Guide will help you find all of the Relic Weapons in the game and will also suggest the best weapons in Gears 5 that are sure to annihilate your enemies.

Gears of War 5 might not have as much weapon as any third-person shooter out there. But the ones it features are great and have a great weight and feel to them. Our Gears 5 Weapons Guide will help you with all Relic Weapon locations and the best weapons in the entire game.

Gears 5 Relic Weapons are one of the most powerful weapons in the game. These Relic Weapons have special buffs which make them quite unique. However, these weapons can’t be upgraded as they are already enough of an upgrade over their original counterparts.

These weapons have to be collected as they are scattered about in the world and our Gears 5 Weapons Guide will help you with how to find all relic weapons.

Head to North Tower substation in The Valley during Act 2. To the right of the substation, there will be two generators. Head to the space between the generators and you’ll find the Boomshot Relic to the right.

During The Source of It All missing in Act 2, you’ll be looking for a signal. Look for a pile of snow nearby it has a red omen on it. There is a gap to the left of it, just enter the gap and grab the Dropshot Relic.

This relic weapon can be found during the Missing Outsiders mission. Just go to the shacks outside and the Longshot Relic is in one of the wooden shacks outside of New Hope.

Again, during Act 2, head to the Abandoned Mine to the south of the Valey. Don’t take the main path instead take the dirt track heading up with a lot of tree stumps nearby. The Torque Bow Relic is right next to a wooden support.

Choosing the right weapon in Gear 5 can be the difference between life and death. Players can choose from a variety of weapons in Gears 5. There are standard weapons, pistols, and heavy weapons. The following are the best Gears weapons.

If you are fond of using standard weaponry in Gears of War 5 then the following weapons will serve you the best.

Gnasher Shotgun
Gnasher almost had a competition with Overkill but Gnasher wins on account of having high damage and big enough clip size.

Lancer GL
Lancer might be the iconic Gears of War weapon but in Gears 5, Lancer GL takes the lead. The reason we recommend this weapon is because of its grenade launcher with a laser targeting system that replaces the chainsaw. This makes it more accurate and you don’t have to get too close.

Longshot
Another classic Gears of War weapon with high damage and insane accuracy. This is the only sniper players should get who like to fight from a distance.

In the heat of battle, players aren’t always able to reload their primary weapon as enemies tend to kill the player while reloading, especially, in tough situations. A good pistol can actually save your life and the following are the best pistols to go for in Gears 5.

Boltok Pistol
Boltok Pistol is a classic from previous entries in the franchise. This is undoubtedly one of the best weapons in Gears 5 with high damage, decent clip size and ability to zoom for more accuracy.

Talon Pistol
Talon is a new addition to Gears 5 that packs quite a punch. This weapon is best used in short bursts and is most effective against enemies at close range.

Heavy Weapons pack the biggest punch compared to other weapons in Gears 5. However, these weapons have limited ammo and it can’t be refilled by picking up resupplies. So, be very careful where you want to use heavy weapons.

Tri-Shot
This heavy weapon is best to clear a large group of enemies and is usually comes equipped with a DR-1 or flying Guardians.

RL-4 Salvo
RL-4 Salvo is a missile launcher which is capable of eliminating swarms in just one shot. Not only that, this weapon is capable of firing missiles in quick succession. So, if you enjoy blowing stuff up then this the heavy weapon to go for.

That is all for our Gears 5 Weapons Guide with tips on where to find each of the relic weapons and the best weapon in the game.