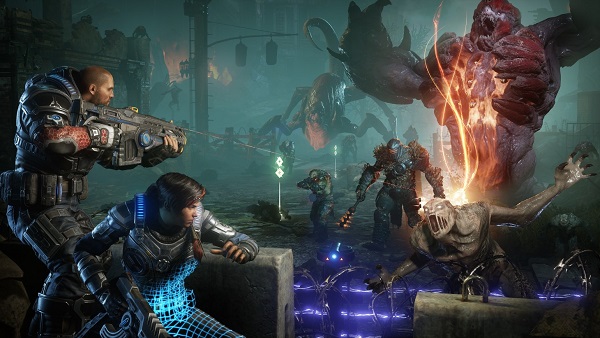 Gears 5 aka Gears of War 5 brings back some of your favorite characters such as Kait Diaz, Del Walker, and JD and Marcus Fenix. But Gears 5 bring you, Jack, as well, your trusty and highly useful robot sidekick. Jack comes with a range of abilities and ultimate abilities to give the player an edge in battle.

Jack’s skills and abilities include 11 base abilities and 7 ultimate abilities. There is a skill tree that you can explore to upgrade Jack’s abilities for maximum damage.

In this section, we will discuss each ability and its upgrades.

Flash – Jack puts out a flash that stuns the nearby enemies. Following  are the grades for Flash:

Pulse – Helps locate nearby enemies with a Pulse discharge. Following are the upgrades for Pulse ability.

Shock Trap – Jack puts down a trap to electrify enemies. Following are the upgrades for Shock Trap.

Health – Upgrades Jack’s health and ability to heal allies. Following are the ability upgrades for Health.

Hijack – Jack can temporarily hacks an enemy/ Following are the upgrades for Hijack.

Zapper – improve the Zapper Jack’s ability. Following are the upgrades for Zapper ability.

Core – Boost core systems of Jack. Following are the Core system upgrades you can make.

You need to find 273 components to upgrade jack and 289 to upgrade to the point of Ultimate. Each ability can give you great bonuses that give you an edge in combat. You can upgrade each ability via Jack’s skill tree.

This marks the end of our Gears 5 abilities and ultimate abilities guide for more help check out Act 2 collectibles locations.