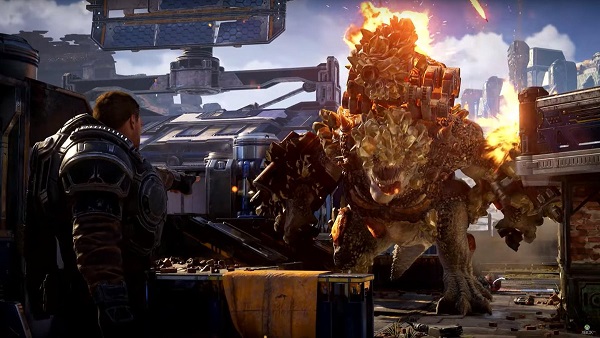 I don’t think any of us is surprised that Gears 5 (Gears of War 5) brings back the Horde mode. It is a popular mode that tests your Gears prowess. Each numbered entry in the series features the Horde mode. We saw this mode in Gears 2, 3, 4, and now with the release of Gears 5.

In our Gears 5 Horde mode guide, we will discuss what this mode is (for the novice), how to win, ultimate abilities, characters, and much more.

Horde mode has always been one of those “less complexity, more fun” kind of game modes. It is all about placing the fabricator box and defend the crap out of it. The premise has been the same since Gears of War 2. You choose a place to put down the fabricator box, it can be completely random so choose an area that suits your defensive plan. You and your team will take on waves of enemies, one of you goes down, he/she can be revived. However, if you all end up dying which happens a lot in Horde mode as it is challenging, you’ll lose the game. At higher difficulty levels you can’t choose to retry the waves you failed at which makes things harder for Gears of War 5 players.

Now, before you die you will kill a lot of enemies and as you kill them they will drop power on the ground. This is the currency used to get better items and upgrades from the Fabricator. You can take out machine guns, barriers, and a range of other items to stop the enemies in its track. Yes, the Fabricator is your one-stop shop to get weapons, traps, grenades, etc.

Enemies not only grow tougher with each wave but also, starting round 10, you’ll face bosses. Some of the bosses you’ll face are from Gears 5’s main campaign so you’ll have a good idea how to beat them. So what’s the goal of Gears 5 Horde mode? Survive until Wave 50 and you’ll win the game. Easy right? Easier said than done my friend.

It won’t be a fun mode if the developer would just copy-paste the mode every time a new Gears game comes out. There is a brand new mechanic introduced in Gears of War 5 Horde mode. Fighting bosses isn’t the only problem, you need to keep an eye on the Power Tap. At Wave 11, the first Power Tap is going to spawn on the map at a random location and it must be defended or captured. If you somehow manage to defend this, your team will get more power in each round.

Tip: Fabricator is often located somewhere far from the location of your fabricator.

Due to its location, your team might have to split up. Some will defend the Fabricator while others will go guard the Power Tap. Every 10 rounds the location of the Power Tab is going to change.

Tip: Make sure you have a full squad if you plan to take control of the Power Tap. The AI Controlled teammates are pretty much useless when defending the Power Tabs.

One major change that you need to keep in mind is that the power you pick up, you are going to be sharing it with your teammates. All power is distributed equally among the entire team.

Your abilities, skills, and traits, in Horde mode, are directly linked to the character you choose to play as.  The following section of this Horde mode guide shares key differences between each character. There are 6 characters in total for Gears 5 Horde mode.

Tip: Having a balanced team in Gears 5 Horde mode is crucial so we think it is best to have both Marcus and JD on your team. Both characters can deal significant damage to enemies, very useful when defending Fabricator and Power Tap.

Gears 5 Horde mode offers performance boosters in the form of Perks and Skill Cards. These, when used right, can help you reach the 50th wave and win. Perks are our set potential boosts your character can use as you enter individual horde mode games. Using your Power you can get one of four perks during the match. You can spend power to boost your HP pool or increase assualt rifle damage.

Tip: It is often more useful to spend Power on perks than barriers and turrets. Perks can be used the entire match while turrets and barriers take damage.

Meanwhile, Skill Cards are tied to each character’s overall levels in between matches. As you move to higher levels, you can additional Skill Card slots. The cards take the form of rewards for each specific character you play as.

If you played Gears of War 4 you pretty much know that it is best to leave at least one enemy alive to make sure the counter for the next game doesn’t start.  Pick up all the Power on the ground and do upgrades before you kill the final enemy on the map.

Running out of ammo is a real issue when you are pinned down by the enemy fire. In such a situation, do not be afraid to rush and pick up an enemy weapon and use it. Weapons such as Hammerburst rifles and Enforcer SMGs are easily found laying around. You can refill ammo by picking up enemy ammo.

Use Longshot and Markza to focus fire larger enemies. Guns like Enforcer are useful for targeting smaller enemies.

One of the most annoying enemies you come across is The Sire. They will drag you away from your team and a counter begins. If the counter reaches 0 you are dead. Make sure your team is aware of where The Sire are and help each other survive their attacks.

This marks the end of our Gears of War 5 Horde mode guide. If you need more help with the game check out our weapons guide, and head to the guide section for collectibles for each chapter.