GameStop Stock: 2019 Holiday Season Was Its Worst Ever, The End Is Nigh?

We compared the data for the last few years (from late November to December) to show how the company performs during the peak of the Holiday Season, you can check out the data below. GameStop ended the year at $6.08, its lowest since 2002 ($4.86). Throughout 2019 GameStop stock struggled to keep its head above $5, making this the worst holiday season for GameStop in terms of stock price and investor attitude.

Overall in 2019 GameStop stock plunged 52% which made the retailer’s year go from bad to worse. In 2019 the company suffered from plunging sales and profits and a failed attempt to sell itself further contributed to the decline.

Well, unless drastic changes are made to the core business of GameStop, the end is nigh. GameStop generated 34% of its revenue and 23% of its gross profit from new physical video game sales.

Unfortunately, this core business is losing costumers to digital distribution platforms such as PlayStation Store, Xbox Store, Steam, Epic Games Store, and so many others. More and more publishers are choosing to sell digital games which is evident by the rise of digital sales revenues across the board.

Low new physical game sales also dent GameStop’s pre-owned and value video game products business, which was responsible for 24% of its revenue and 43% of its gross profit last quarter.

GameSpot needs a solid rebound plan but for the time being CEO George Sherman has no clear idea in front. Whatever efforts are being made are not enough to save this legacy gaming store. At this rate, GameStop may not survive the next 5-years (maybe less).

While the arrival of disc-based consoles like Xbox Series X and PS5 indicates that discs aren’t going anywhere, it is a false hope for the disbelievers and analysts who underestimate the power of digital distribution platforms.

Having discs is more of an additional option people like to have rather than using it as the main feature. It won’t be long before it completely fades away. 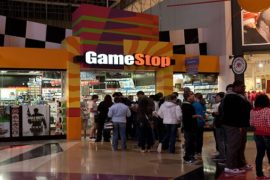