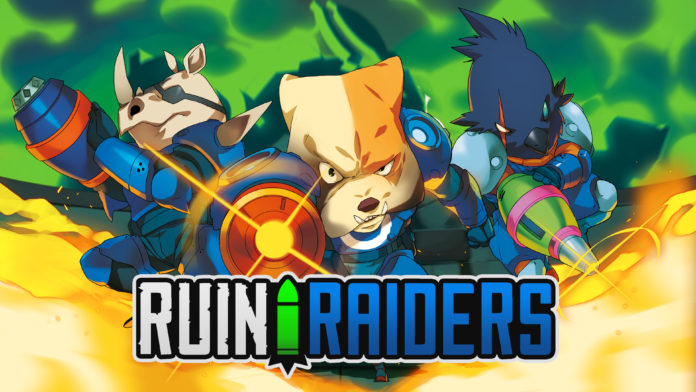 Publisher Freedom Games is pleased to announce Ruin Raiders, the anthropomorphic turn-based tactical roguelike from Overpowered Team will clamber onto Nintendo Switch and PC via Steam and the Epic Games Store on October 14, 2021. Overpowered Team’s Godstrike, the boss rush bullet-hell shooter where time is everything, will also release on PlayStation 4 and Xbox One as well as PlayStation 5 and Xbox Series S|X via backward compatibility on October 14, 2021.

Explore an unpredictable and ever-changing labyrinth in Ruin Raiders. Lead expeditions of animals on a one-way trip into the labyrinthine depths of a mysterious structure rumored to hold untold riches. Outfit squads with an armory of weapons, stat and skill-boosting upgrades, and items to fight against the strange automatons and creatures lurking underground.

Engage in tactical, turn-based battles where positioning is as key as dealing damage. Use animal-specific abilities to gain an edge in combat. Rhinos can boost their armor rating while Dogs can focus fire for a guaranteed hit. Flank foes to give allies overwatch support and lob grenades from cover at unsuspecting enemies to survive the myriad horrors that lie below.

Survival isn’t the only option. If a squad isn’t able to reach the ruin’s final floor, there’s still hope. Return to the base camp to unlock structures that supply upgrades, additional character slots, and more to give the next crew a better chance. Uncover blueprints to forge powerful weapons and attachments that persist from one run to the next. Experiment with an array of team configurations and push onward to overcome this challenging roguelite experience.

Face off against the avatars of a forgotten deity in Godstrike. Released for Nintendo Switch and PC earlier this year, the PlayStation 4 and Xbox One versions of the game contain the same explosive action of this time-based bullet hell where time is both health and currency.

Survive multi-staged boss fights as the Herald, weaving oncoming fire to topple foes before time runs out. Avoid taking damage because the Herald only has as much health as time remains. Launch attacks to chip away at their health before unleashing powerful abilities like True Shot, a homing attack that curves around arenas, to deal massive damage at critical moments.

Slay a pantheon of increasingly imposing enemies across the campaign or take on alternative modes. Progress through Arcade Mode to start with all abilities and skills unlocked, dive into the randomized world of Challenge Mode, or compete in Daily runs with pre-set modifiers. Broadcast the action live to Twitch viewers and allow them to alter the Herald’s fights with a full-featured chat integration that allows an audience to vote on status effects and more.

Benjamin Tarsa, Director of Publishing, Freedom Games had the following to say regarding the releases:

OverPowered Team’s work on Godstrike and Ruin Raiders encapsulates what is so exciting about indie studios. These games are such disparate experiences but are both wonderful in their own way and were created with such passion and creativity that make them stand out in their respective genres.

Ruin Raiders will be available on Nintendo Switch and PC via Steam and the Epic Games Store with a 20% introductory launch week discount for $15.99 on October 14, 2021. Godstrike will be available on PlayStation 4 and Xbox One as well as PlayStation 5 and Xbox Series S|X via backwards compatibility with a 20% launch discount for $11.99 on October 14, and also available for purchase on Nintendo Switch and PC via Steam. For more information on Ruin Raiders and Godstrike, please visit the official Freedom Games website.