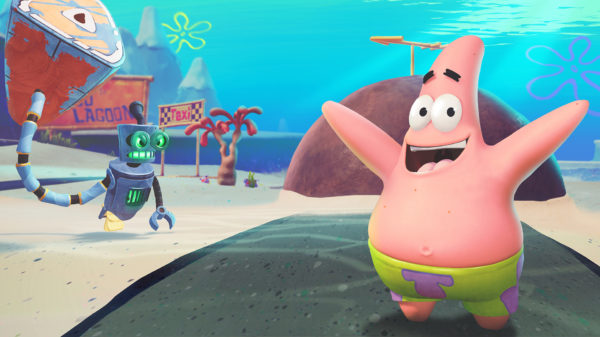 Golden Spatula is one of the many collectibles in SpongeBob SquarePants The Battle For Bikini Bottom Rehydrated Flying Dutchman’s Graveyard and there are eight of them. This guide will help players find all of the Golden Spatulae.

The following are the locations for each of the Golden Spatulae in Flying Dutchman’s Graveyard along with how you can get to them.

The first Golden Spatula is located at the very end of the Graveyard Lake, opposite of toll gate.

Complete the first column puzzle in Graveyard Lake and then players will wall jump up and defeat Tuber Robots and go to Checkpoint 2. From here, look up and left and players will see some ooze coming out of a ship.

Shoot a cruise bubble at the lid which will stop the ooze from pouring down and the lake will be drained. Now return to the first column puzzle and drop down to the left and find a Clam. Pay it 2,700 Shiny Objects and the treasure chest will open with a button inside it.

Don’t press the button yet as it’ll only open the cage for 30 seconds. First, jump down to the dirt path in the ooze and keep going down until you find the D1000. Destroy it and then make your way back to kill the robots along the way.

Now press the button and the cage will open at the end of the dirt path. The Golden Spatula is in the cage. Once the player has it, there are some columns behind the cage. Wall jump up them and you’ll return to the main path.

As for the Golden Spatula #3, follow the path mentioned above until you drain the lake. After that, go across the column puzzle and stand at the edge of the wooden ship. Look down from there and there will be a half ship down there. Jump down and the Golden Spatula is to the left on the main deck.

Go to the Graveyard of Ships near the Squidward’s position and go to the end of the area. The spatula is just before the small ship that takes you to the nest area.

Make your way through the second Wall Jump slot and take care of the Slick Robot. This will trip the Checkpoint 4 and from here there is a Clam to the right. Pay it 2,700 Shiny Objects to lower a Bungee Hook and spring down to vortex below and grab the Spatula.

As for the Golden Spatula #7, its on the Dutchman’s Ship. Swing-Hook across from the Robot ship to the rear deck. Look down from the back of the ship and there will be a Springboard below. Bounce all the way to the top of the central mast, and there you’ll find the Golden Spatula.

To get the final Golden Spatula players just have to defeat the Flying Dutchman himself.