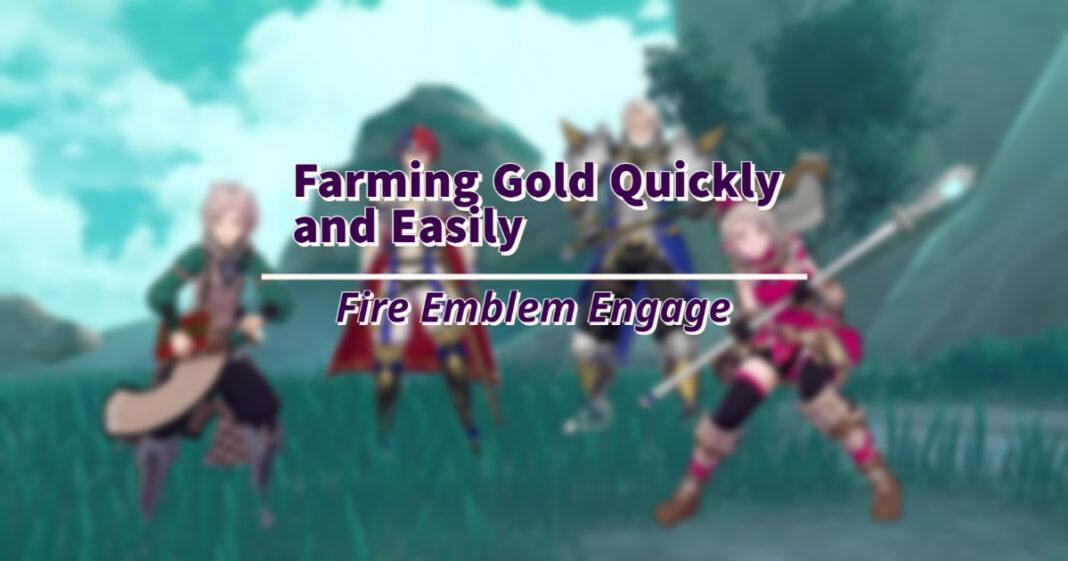 Be it real life or a fictional one; money is never enough, it seems. Fire Emblem’s in-game currency is Gold, and you will want to ensure you have enough of it for the vast variety of items and upgrades the game offers. Other than consumable items, Fire Emblem Engage introduces a new mechanic where you can donate to Kingdoms. This will increase the spawn rates of enemies, but you will be able to farm greater rewards. Skirmishes in these kingdoms can be pretty profitable in the long run.

Simply running through the game is not easy on the bank account; sooner or later, you will be looking to make the big bucks quickly. Gold is quite a scarce commodity in Fire Emblem Engage, and it’s good practice to save gold wherever possible. This guide will discuss all the details you need to quickly and easily farm Gold, including a method that might later get patched out by Nintendo.

How to Farm Gold in Fire Emleb Engage

You can do multiple things to earn more gold in the game. Here’s what you need to do:

Instead of buying everything you require for in-game battles, you can play online and earn new weapons, items, and gear. This way, you save the gold you would have to spend on essential equipment at the merchant’s shop.

Playing online will have your inventory overflowing with base-level equipment. These are very helpful initially, but by mid-game, it is better to sell them and either buy/upgrade high-level weapons or save them for later donations to various kingdoms.

Tip: Saving gold to donate later to kingdoms is much better than splurging at the merchant.

Once you have cleared an area, you can engage in skirmishes there. You can check for available skirmishes in any cleared area on the map. If you defeat a rare enemy in skirmishes, you can get a lot of gold in one go. Skirmishes in kingdoms you have already donated have a higher probability of unlocking more significant rewards and spawning rarer enemies. In the end, killing rare enemies can get you a bigger bag of Gold.

These are often overlooked because they’re side missions and do not contribute to the main game. Completing such quests can be highly profitable while being only slightly time-consuming. Complete as many paralogues in each area you visit in Fire Emblem Engage to get more gold.

Leif is a Covert Emblem that can be an absolute ATM machine if implemented correctly. Leif’s Vantage skill can take out enemies very quickly; as you know, taking out enemies means rewards and gold, especially in skirmishes. However, taking down enemies is only half of it. If you level up Leif’s luck stats, rewards can be multiplied. With an increased drop rate of gold, this tactic can make quick you a lot of gold in a short period.

‘Skirmishes’ is the most efficient way to make money, XP, Bond Fragments, and a host of other goodies. You might quickly run out of skirmishes in any given area, and waiting for a specific amount of real-world time is the only way to respawn them. Now, you could donate to kingdoms to make the respawns faster, but there is another way.

Quite a simple and quick way to respawn skirmishes is by changing the time on your Nintendo Switch. You won’t even have to quit the game. Just press the home button and find your way to the ‘Date and Time’ section of ‘Settings.’ Move the time forward by a couple of hours and get back into the game. Check your map for newly available skirmishes.

This method can feel a bit exploitative (because it is), and the rewards are not the same as if you had donated to kingdoms, making them stronger and spawn faster. However, in desperate times this can be the type of desperate action you need.

That’s everything you need to know about farm gold in Fire Emblem Engage. Want to read more about the game? Here are some guides you might like: