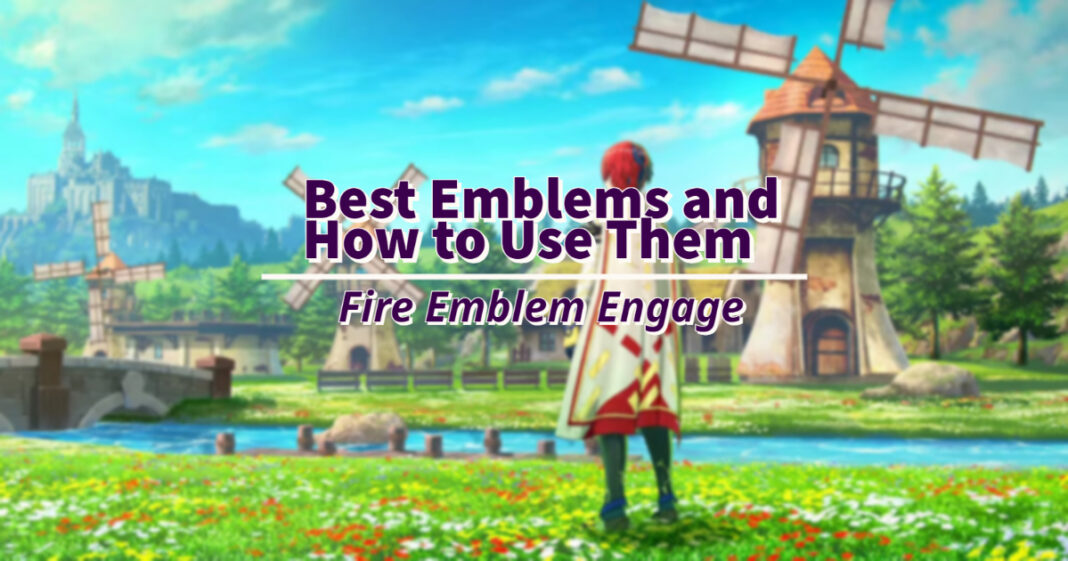 Fire Emblem Engage ensures you always have options when embellishing your characters – the game offers an astounding 12 Emblems for players to choose from. Though all Emblems share the same character classes, their abilities, and stat bonuses given to the character they are linked will differ. With so many options available, deciding what the best emblems are can be overwhelming. To make things effortless, I will walk you through the ins and outs of every Emblem in Fire Emblem Engage so you can comprehensively understand.

If you’ve played Fire Emblem series in the past, then you understand how powerful Emblems are–characters dwelling within special Rings who bestow bonuses, abilities, and mechanics to your character.

#1: Marth (Fire Emblem: Shadow Dragon and The Blade of Light)

The first Emblem you will meet is Marth which will give your unit unparalleled mobility. With him by your side, they become dodge attack experts and can traverse the battlefield with increased speed and improved attack capabilities. In addition to these benefits, Marth offers:

Ignite your magical attacks with the Celica magical emblem, granting a powerful boost. To further maximize your Strength, you can use their signature long-ranged attack to combat opponents. When facing a formidable enemy, Celica’s Wrap Ragnarok ability is optimal. However, this decisive move comes with a price – it depletes your HP.

The Sigurd Emblem is highly praised for its defense-breaking capabilities, granting rider units a distinct edge in battle. On top of this, it rewards any character with an impressive +5 mobility bonus and 2 extra mobility points if they are cavalry units.

If the attacking character takes several steps before assaulting with Sigurd’s skill, the damage inflicted is even greater.

Leif is a highly skilled weapon master Emblem that can boost any character’s combat abilities. Just equip Leif with the character you want to upgrade and watch them demolish enemies before they have time to react! With his Quadruple Hit ability, your team will be able to obliterate multiple enemy HP in one turn- leaving no chance for mages or tanks to survive.

Roy’s Emblem is a compelling asset for any character; its explosive power and AoE strength obliterate opposing hordes in a single stroke. What’s more, the Blazing Lion has been known to emit fiery blasts over wide areas of land – providing additional damage to enemy forces! With Roy’s Emblem at your disposal, no opposition stands a chance. By equipping Roy with powerful, knock-out maneuvers and attacks, which can take out enemies swiftly and effectively, even the toughest of adversaries will struggle to stand up against him.

Lyn is a renowned sniper emblem, allowing for powerful long-range assaults on unsuspecting targets. Not only does Lyn bring devastating damage to close-range combat, but it also offers significant damage in extended ranges. Furthermore, the Call Double ability permits players to summon clones that can launch fire at foes from varying distances.

Eirika is like no other emblem – it allows you to swap between two different heroes and take advantage of their unique skill sets. When Erika is equipped, you can absorb damage from your opponents and penetrate those with defensive units. The signature ability, Twin Strike, ensures that even armored foes cannot stand up against its power.

Ike has earned the moniker of “powerhouse” for a good reason. His impenetrable armor is akin to a divine blessing, protecting him from all enemies and allowing him to be victorious in a battle no matter how fierce the opposing force might be. To further strengthen Ike’s impressive arsenal, pair any high HP and Defense unit with his own, and you’ll become an indomitable force!

Micaiah is the most outstanding character with magical abilities which will help you in battle. She can heal any alley from a safe distance, and her teleportation skills provide an added advantage. Her ultimate ability, Great Sacrifice, allows her to transfer up to 90% of her health and spread it among all allies for healing purposes – making her truly invaluable!

Lucina is truly one of the best support Emblem characters out there. What makes her stand apart, however, is that she provides excellent support and has amazing offensive capabilities too! Lucina’s teleport and double attack abilities can easily deliver a hefty amount of damage to your enemies. Plus, even if you’re fighting solo and it becomes intense, you can always summon an ally for assistance with Lucina’s emblem ability. This powerhouse character also benefits slower or weaker characters, making using a Lucina emblem practically invaluable. Finally, Lucina’s remarkable ability is “All For One,” which tells all of her allies to combine their attacks and launch a flurry of strikes against one enemy.

By donning the Corrin emblem, you are granted the power of dragons that make you an avatar. With your command over the fire, water, and stone elements, the battlefield can be morphed to fit whatever strategy you choose – from defensive or offensive tactics against enemies. Ultimately, equipping yourself with Corrin’s power guarantees protection for allies. In addition, Corrin’s Torrential Roar ability can quickly weaken any adversary.

The Professor of the Monastery, Byleth, has resurfaced to become a pivotal support emblem. They can easily overpower enemies by granting allies additional turns with increased hitting power, defense boosts, and healing capabilities. Furthermore, their signature ability – Goddess Dance – grants them an extra turn, keeping foes continuously at bay. As such, your characters will reign victorious in all their battles.

That’s all for our list of the best Fire Emblem characters to use as emblems for your favorite hero. Choose wisely and equip yourself with the most powerful support and offensive abilities! Have fun, and may your battles be victorious. Want to read more on Fire Emblem Engage? Here are some guides for you: