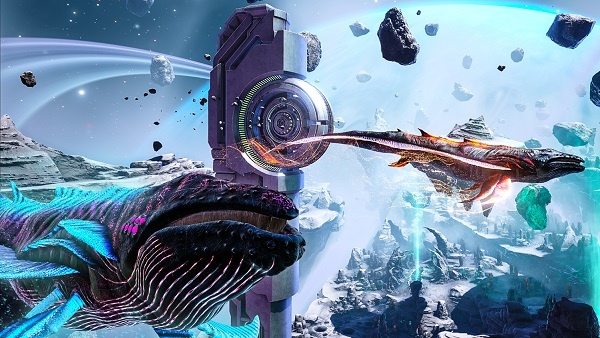 Space Whale is another tameable added to Ark: Survival Evolved with the release of ARK Genesis. Unlike Magmasaur, it’s fairly easy to tame a Space Whale in ARK Genesis. In this guide, we’ll go over everything you need to know about finding and taming Space Whales in the game.

To tame an Astrocetus in ARK Genesis, you’ll need to have a Cannon and a Tek Skiff. Place the Cannon on the Tek Skiff and teleport to the Lunar biome where you’ll find the creatures almost everywhere – floating through space.

Depending on the other creature’s level, you should be able to knock it down with a single cannon shot, allowing you to knock multiple low-level Astrocetus at the same time.

Space Whale in ARK Genesis is an important tame, thanks to its unique ability to wrap through the hyperspace. On top of that, it can also take anything within its close proximity and can pass through creatures, structures, and other natural formations.

This ability should allow you to wrap into a base with your creatures and attack before the enemy has a chance to react.

With Astrocetus Tek Saddle, you’ll also gain access to three gun turrets as well as a bomber mode. You can also build on its back but that’s limited to around 4-5 structures. I should also mention it here that the creature can’t mate but can be cryo-poded.

This is how you can find and tame Space Whales in ARK Genesis. For more on the game, you can check out our ARK: Survival Evolved Wiki guides.