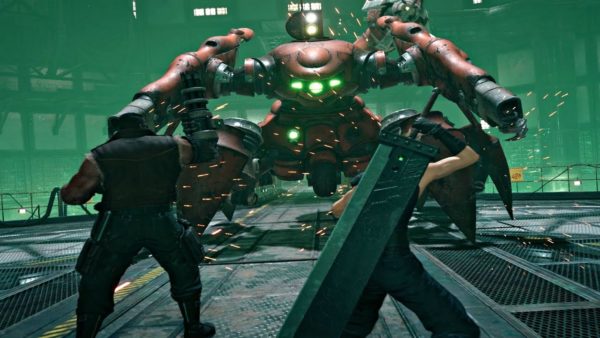 Our Final Fantasy 7 Remake Guide will help you with how to defeat the Scorpion Sentinel so you can progress with the game.

How To Defeat Scorpion Sentinel

Scorpion Sentinel is the first big challenge that Final Fantasy VII Remake throws at players. This boss fight is divided into two phases.

Our guide will help you with how to defeat the Scorpion Sentinel quickly so that you can progress with the game.

Keep on attacking the sentinel to fill the stagger meter and don’t stick close to it for long as it’ll swipe its tail to attack. When the boss uses the targeting laser, it’s time to block missile. Don’t dodge them as doing so still has a chance of you receiving damage.

Do enough damage and Scorpion Sentinel will protect itself by a force field and will be immune to all attacks. You need to attack the Field Generator behind it and destroy it.

Use Barret’s Focused Shot to deal some serious damage to the Field Generator and use Cloud’s Fire Spell to further increase the amount of damage you deal. Also, keep your distance from the Sentinel as it can use an area of effect attack.

Deal enough damage and then it’ll jump to the wall. Use Barret as he’s the one with ranged weapons. Use the Overcharge shot to bring the sentinel back on the ground.

At any point in the boss fight, if the stagger meter is filled, use Cloud’s Braver and Barret’s Focused Shot. Once the Scorpion Sentinel’s health is down to half, the second phase begins.

In the second phase, the sentinel will use missiles that’ll bring down some debris in front of it. Then it’ll start charging its Tail Laser. Quickly take cover behind the fallen debris to protect yourself against the laser.

While in cover, you won’t be able to do much. Use potions and Barret’s Healing Spell to heal both Cloud Strife and Barret. In this phase, the sentinel will use a variety of attacks.

You need to wait until the Scorpion Sentinel is open for attack. Do damage and when you see it charging its tail laser, take cover behind the debris. Keep on attacking and dodging its attacks and eventually, the boss will be defeated.

That is all for our Final Fantasy 7 Remake guide on how to beat the Scorpion Sentinel. For more on the game also see our Moogle Medals Locations Guide and How to Get Manuscripts.