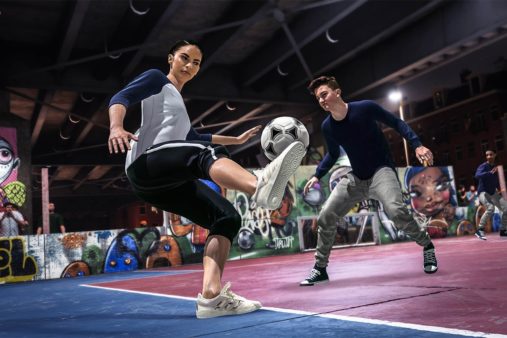 EA Sports FIFA 20 is here and guess what? It brings FIFA Street back, kind of.   FIFA 20 comes with a  new game mode called VOLTA which is pretty much   FIFA Street.     FIFA  20   VOLTA mode guide will explain exactly what you need to know about the new FIFA   game.

VOLTA takes FIFA back to the streets with authentic/classic small-team based football matches. The new game mode pulls you out of the shiny lights and roar of the crowd in the large stadium and puts you on the street to hon your skills.

VOLTA mode aka FIFA Street mode comes with countless ways to customize your character/player. You can pick from a range of tattoos, hairstyles, and multiple celebrations as well as gender. You can use the same player across all FIFA 20 Volta game modes. You can complete challenges to unlock new gear and other personalization items.  While the mode takes place on the streets, you will still be playing across the world from an underpass in Amsterdam, neighborhood cage in London, and a Tokyo city rooftop.

VOLTA is divided into four sub-modes in EA Sports FIFA 20. Each offers a unique experience and something new to do so you’ll be busy.

How to Play FIFA 20 VOLTA

VOLTA is pretty simple to understand; it is played with up 5-players on each time. There two sets of rules you can choose from to decide the games; goal-tally based system and the traditional timer.

In 3v3 and 4v4 matches, there is no goalkeeper so instead, the defender at the back is all there is between the opponent and the goal post. The defender acts as a passer and shooter when he isn’t blocking the goal. Meanwhile, the Street with Keepers option features a large net and a goalkeeper and is played in a 4v4 or 5v5 formats. There is another mode called “Futsal” that has traditional formations from other FIFA 20 modes like Kick-Off, FUT, and more.

Some of traditional mechanics such as penalties and off-side don’t exist in VOLTA mode. There is also no stamina bar so run as much as you want but the small scale of the field limits your sprint.

Pitch size also varies depending on where you are playing. Since the goal net is small compared to the full-scale match, shot placement is important.

Tips and Tricks, How to Win

In this section of the guide, we will discuss what to do and how to win in FIFA 20 VOLTA game mode.  Small tips and tricks can help you do better in the game.

In VOLTA it isn’t hard to win or lose the possession of the ball with your defender. It is also very tempting to rush the goal as soon as you have the possession. If there is a clear opening, of course, go for it. But if you rush the opposing goal and lose the ball, you risk leaving your goal net wide open for the opposing team.

Stick to tactical football where you pass and see your opponents position. Don’t make your defender dash to the goal net and leave his position. Pass to midfielders and attackers and let them handle the goal scoring.

There is no harm is wining and looking good while doing it. However, it comes with its own risks as well. You can end up losing possession and allowing the other team to score. FIFA 20 lets you perform all types of shots, including the Chip and gorgeous finesse shots. If you completly trust your ability to pull off fancy shots, by all means, go for but there two situations where you should just keep things simple and focus on just putting the ball in the net. First, when there is a pressure situation, defenders are on you or you are behind on the scoreboard. Second, Second,  it is a PvP game and your promotion and relegation are at stack.

The small size of the net means there is big change the ball would just bounce off the pose or miss the net completely. Your accuracy is crucial so don’t be afraid to get as close to the net as possible. Of course, the occasional long-shot doesn’t hurt but stick to the basics and keep things simple.

Track Your Team and Opponents

In any football match, be it in VOLTA mode or the traditional FIFA game modes, keeping track of your team members and the opposing team’s marking of your players. Understanding, where everyone is, helps you get more through balls.

Through passes are even more important in VOLTA. Since there is no off-side rule here, it is so easy to get the ball through and create a chance to score. Make sure you master the through the pass. to create holes in the opposing team’s defense. However, keep in mind that you must avoid passing into crowded zones.

Control The Trajectory With Walls

Playing the VOLTA mode means a lot of freedom since there are hardly any rules that apply here. One of the rules missing is that there is no out of bounds here. The boundary is a wall around the field which you can use to your advantage. You can pass the ball to the wall if your teammate isn’t around or is marked by the defense.  Hit the wall to create backpass to yourself at a different position and run to the ball. It is all about to understand and controlling the trajectory of the wall passes to create opportunities for yourself and get ahead of the defense line.

No matter how many times you played FIFA, the game can still teach you a thing or two. When you start out in VOLTA story mode, you will go through training drills. It is strongly adviced that you don’t skip these drills. Every single drill will help you learn the basics of this new FIFA 20 game mode. You can learn about dribbling, defending, and passing. Use the main menu to revisit more training options.

Keep Track of Your Skills Tree

Unlike other game modes, there is a skill tree here which must be kept track off if you want to unlock more advanced moves. It is not about learning the controls and pulling off greate maneuvers in matches. You start with two-star skills so only the most basic moves are available to you.

Use Skill Points to unlock skills and moves.

Fields in VOLTA are really small so you can intercept the ball easily. The same is true for your team, they can take the ball from you easily if you’re not careful. Small fields mean small lanes you make sure you create openings for interceptions whenever you are not in possession of the ball yourself.

Use L2/LT to move into the passing lanes. Once you understand the process you will end up with more interceptions and a higher rate of possession. Since there is contextual defending, you can use jockeying to block your opponent’s shots at the goal as well.

Similar to how things are in Ultimate Team, the chemistry among the players matters a lot in FIFA 20’s VOLTA mode. There are a total of three factors that boost chemistry, favorite formation, home turf, and position. If you use the players who share the same favorite formations and home turf it will automatically boost chemistry. Additionally, using players in the correct position helps matters as well.

How to Create the Best VOLTA Team

Creating the best team means you must beat the best first. As you take down other teams across the globe in tournaments, you will be given the option to recruit new players in your team. Not all players can be recruited but you can choose the talented players to replace the weakest links.

Your main character Revvy plays as an attacker by default, and Syd is guarding the gaol or playing the defender. This means that the first ones to go are your midfielders.

Just like in FIFA Ultimate Team, you can use any player at any position but it tones down their effectiveness.  The highest levels of chemistry come from players place at their preferred positions. So make sure there are enough available players to fill each position.

Also, once you win a few matches you will have enough skill points to your character in several areas such as passing and finishing. These abilities are crucial during the VOLTA World Championship.

This marks the end of our FIFA 20 VOLTA mode guide. If you need more help with the game, check out our FIFA 20 Best attacking formations, best defensive formations.