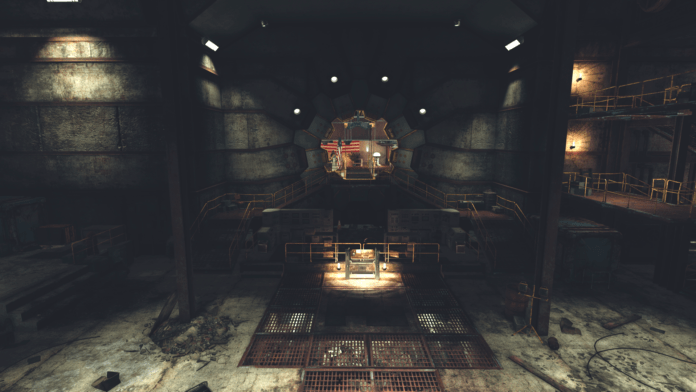 Fallout 76 is a multiplayer game that offers the usual fallout experience but, without any NPCs. However, the lack of NPCs in the game was fixed with the Wastelanders expansion. Still, the base campaign features no NPCs. In this Fallout 76 guide, we will help players with the walkthrough of One Of Us main quest.

Fallout 76 One Of Us Walkthrough

Go to the Whitespring Resort and then follow the objective marker to Whitespring Bunker. The bunker entrance will be blocked and a mysterious figure will open it from the inside.

Enter the bunker and make your way down through the right corridor. Press the marked button and after the picture, go to the dispenser and activate it to obtain Operative Underarmor. Go to the “Orientation” door and head downstairs.

After speaking with the mysterious figure, go left and head further down. MODUS will request players to take a test. Players can use the ModuS terminal behind the testing computer to skip the test or take the test. If players score well, MODUS will reward them immediately.

Players will get a reward and a System Access Tape for completing the test. This tape will help players to hack into a Siglnt System terminal in Sugar Grove.

Go to Sugar Grove by following the quest marker. The southern door requires a key but, the northern door can be opened from the nearby computer terminal.

Go downstairs to the Siglnt System and insert the System Access Tape. Follow the prompts and then go up a floor and use the Archcal Dispenser to get the data. Go back to the Whitespring Bunker and use the control panel to open the vault door in the bunker.

This time, take the left corridor through the laser grid and use the elevator to get to the exam room. Follow MODUS’s directions and it’ll pass players an Uplink Module.

Head to Astronomy Research Center and then go to the top floor to reach the roof. Insert the Uplink Module into the Connection Platform. Then leave the research center and go east along the road and players will find a care package containing Orbital Scan Beacon and an Orbital Strike beacon.

Take both and go back to Whitesring Bunker. Use the elevator to go down to the exam room and talk to MODUS to complete the quest.

That is all for our Fallout 76 One Of Us Walkthrough Guide. For more on the game, also see Where to Find Wendigo Colossus and Wastelanders Map Fragment Locations.