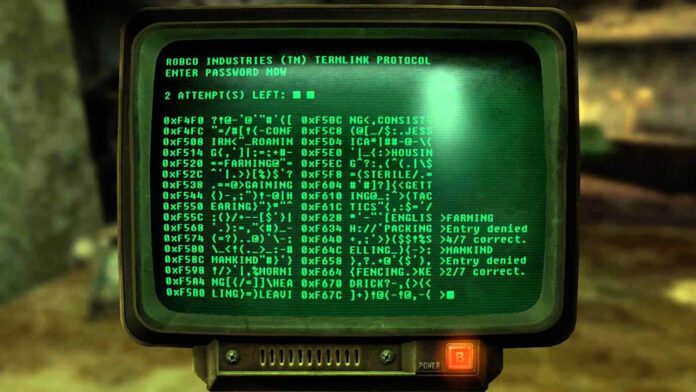 Fallout games offer players a lot of choices when it comes to completing quests. These choices often extend to how players approach a quest. Sometimes players need to find code/passwords to use a certain terminal in Fallout 76. Players can either find the code or they can skip the finding part and just hack the terminal to use it. This Fallout 76 guide will help players with hacking and how to hack terminals.

How To Hack Terminals

Once players initiate hacking, they’ll see random signs and words. Players need to select and press the specific word which is the password for the terminal. Here is how to hack the terminal and find the password.

Position of the letter is important, if players input the right letters but in a different position than the actual password, the compatibility will be 0. Trial and error is the key here and after a few tries, players will be able to input the right password and unlock the terminal. Also, players have a total of 4 attempts at hacking. If they run out of attempts, the password will change and players have to wait 10 seconds before they can try hacking again.

That is all for our Fallout 76 Hacking Guide. For more on the game, also see our Lockpicking Guide and Diseases Guide.