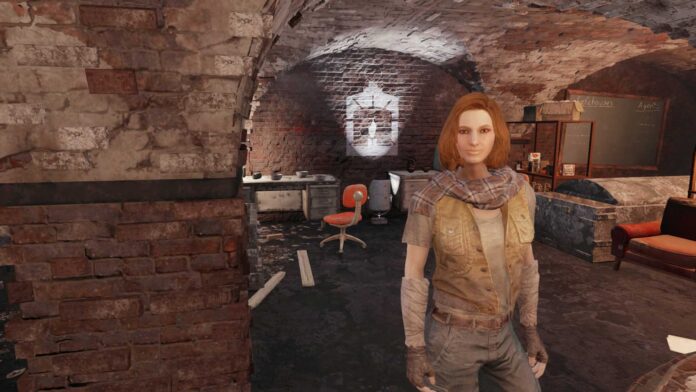 This quest for the Railroad faction starts in a number of ways. Players can activate this faction quest while exploring the world or while completing the Unlikely Valentine main quest.

This quest can also be activated while talking to Doctor Amari during The Molecular Level main quest. Another way to activate this quest is by listening to folks in Diamond City Market or guards in Goodneighbor.

Go to the fountain with a board that reads “At Journey’s End Follow Freedom’s Lantern” in Boston Common. Follow the red brink line along the sidewalk and find the Massachusetts State House and the marker “L4″. The trail will lead players to the Old North Church and the marker “1R”. There will be a lantern sign painted on the wall by the door. Enter the church.

Follow the lantern markers to the Freedom Trail Ring. Spin it to spell out “RAILROAD”. Players will make contact with the Railroad faction and they’ll have to talk to their leader Desdemona.

Talk to Deacon at Railroad HQ who wants to prove yourself. Rendezvous with Deacon at the marked location and then meet with Ricky Dalton and give the Railroad password. If players fail to give the password, Deacon will step in. The Railroad base will be crawling with synths and players can either enter through the back sewer entrance or through the basement of Slocum Joe’s on the outskirts of Lexington.

The later entrance is more challenging as it’s well-defended by the synths. Whichever path you chose, make your way through the Switchboard and Deacon will remove any security doors or terminals that players can’t access. Get to the Department X R&D room and Deacon will open the safe security door.

Once you are done with Deacon, head back to the Railroad HQ. Deacon will be talking to Desdemona. After that, players will be given a codename. Players can choose a codename or let Desdemona decide for them.

Use the Holotape from Desdemona that can be used on any Institute terminal and talk to Patriot. Go to the institute and use any terminal and insert the Network Scanner Holotape. Read the reply and talk to Liam and go back to Desdemona to report your progress. She’ll point you towards PAM who will offer a suggestion while players insert the report on her terminal.

Players need to find Wilfred Bergman who has the login credentials. Go to Cambridge Neighborhood and then enter Cambridge Polymer Labs. After talking to Molly, players will be sealed inside the clean room.

In the main mezzanine area, fight your way through Feral Ghouls and loof for laboratory C3. Enter C5 and make your way to C3 by climbing the ramp of ceiling debris. Access Bergman’s terminal, take the password and return to Desdemona. After that, go to The Institute and give the login credentials to Patriot and rendezvous with Z1-14. He has to process it and players have to return 24 hours later. When players return, Z1-14 will inform them that more have joined the cause. Players have the option to drop any weapons to arm the synths.

Then go to the storage area and take the elevator down. Kill all the synths at the tunnel entrance and return to Z1-14. After that, players have to wait until they complete Powering Up the Insitute Faction quest. Once that quest is done, Z1-14 will send a message. Go to your The Institute quarters and talk to Z1-14. Return to Railroad HQ and Desdemona will give a useful weapon to players.

This quest will unlock after completing the Institutionalized main quest. Desdemona will tell players that Institute Coursers were spotted and asks them to check the Ticonderoga Safehouse. Go to the location and eliminate the two Institute Coursers including Courser leader X9-27. Kill the rest of the synths and report to Desdemona.

The Railroad HQ is under attack. First, go to the escape tunnels and push the enemies back. Then enemies will come through the Old North Church entrance. Go there and eliminate hostiles. After that, talk to Glory and enter the catacombs and fight your way to the main church hall. Eliminate all hostiles there.

The HQ will be secure but not safe. Go to the Cambridge Police Station and meet up with Tinker Tom. Fight your way to the roof and once the enemies have been eliminated, talk to Tinker Tom. Tom will get in the Vertibird, do get in as more hostiles are coming through the air. Start shooting and eliminate all threats.

This Railroad faction quest starts with Tinker Tom piloting the Vertibird with players on the minigun and Deacon. Once on the flight deck, sneak you way through. If players have a Brotherhood of Steel attire, now would be the best time to use it to walk about freely and talk to the members of the faction.

Go to the main deck and plant the charges on the indicated positions. Get out of there as quickly as possible because the combat here is very challenging. Once back at the Railroad HQ, talk to Desdemona.

Listen to Desdemona’s plan and agree to help. Go to The Institute and players will find Z1-14 eliminating hostiles in the relay control room. Desdemona will teleport with her crew. Talk to her and she’ll hand players Fusion Pulse Charge.

Go to the Old Robotics area and eliminate hostiles. Then drop through the hatch and enter the Institute BioScience laboratory. Then make your way to the reactor entrance and the blast door is sealed. Go to Father’s quarters using the central elevator and acquire the override password. Use the password and activate the master security lockdown override.

Now fight your way through the Advanced Systems and into the Reactor Chamber. A lot of synths will be here to stop you. Get to the reactor door and activate the reactor housing. Tinker Tom will teleport the player back to the Institute relay control room. Talk to Desdemona and Tom will interrupt the conversation. Speak with Tiny Tyke and players have two options. Either take the kid under their wing and rescue him or leave him.

Go outside the relay and players will be teleported to the Mass Fusion building. The Railroad faction’s main quests end here after players speak with Desdemona.

This quest becomes available only if the player’s relationship with the Institute turns hostile before the Underground Undercover Railroad quest. Since players don’t have access to the Institute, the Railroad can’t do anything. Desdemona will tell players that Minutemen are now the only ones to stop the Institute. Find and talk to Preston Garvey and become an ally to the Minutemen faction.