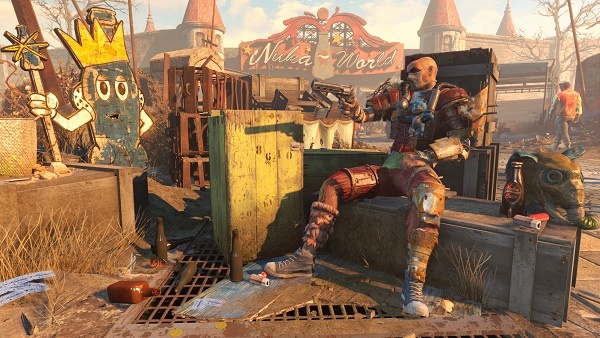 The Nuka World DLC has disappointed by the lack of content. For example, there are only 4 side quests in Fallout 4. However, side quests, as limited as they may be, offer enough rewards to make them worth your time. In this guide, we will discuss everything you need to know on how to complete all Fallout 4 Nuka World side quests.

The following are the only 4 side quests available in Nuka World DLC:

How to Complete: Once you complete The Grand Tour main quest, Amoral Combat side quest becomes available to you. A Raider gang member mentions a new challenger named Fritsch is at the Nuka-Cade. Go to the marked location and speak with the challenger and from there on you’ll have two options:

Cappy in a Haystack

Objectives: Find the hidden cappys, get the Nuka Cola formula for Sierra.

How to Complete: Speak with Sierra Petrovita at a Raider camp, she is usually between The Parlor and Fizztop Grille. The best time to complete this quest is during The Grand Tour. You need to find some hidden cappys.

Go to Starport Nuka and move around the left side of the round structure. Find the “Employees Only” gate on the ground floor, the cappy is on the wall here.

Go to the Galactic Zone and head up the exterior steps to the right of Starport Nuka. Reach the upper entrance of the Spacewalk exhibit. Look to the left of the entrance.

Speak with one of the Protection sheriffs at Dry Rock Gulch to start High Noon at the Gulch main quest. Go to the small cemetery to find the cappy on the back of the gravestone.

Complete the quest we started in the last cappy location, get the key that opens the Mad Mulligan’s Minecart Coaster entrance. Weave through the tunnel to reach the hut and waterfall. The cappy is near the hut.

Go to the Kiddie Kingdom and reach King Cola’s Castle entrance but turn left before the entrance and find the ruined tower. Climb up the tower to find the cappy.

Inside the Primate Building with the gorilla statue outside.

Outside the bottling plant facility north of the Kiddie Kingdom.

Give the contest information to Sierra, she solves the puzzle, and you can enter the word “Refreshing” in Bradberton’s Office keypad. Enter the office and get the Nuka Cola recipe for Sierra.

Objectives: Collect medals, get your reward from NIRA.

How to Complete: NIRA wants to collect 7 precious medals. Collect them all to complete the side quest.

Trip to the Starts

How to Complete: Find all the Spacesuits and speak with Dara to complete this side quest.