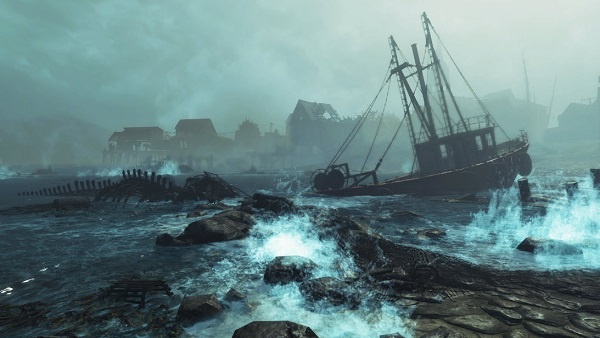 Far Harbor DLC added a plethora of new side quests in Fallout 4. You can complete these side quests to earn additional rewards and XP for your troubles. In this guide, we will focus on everything you need to know on how to complete Fallout 4 Far Harbor side quests.

In total, there are 12 side quests in Far Harbor DLC:

How to Complete: The quest starts after you speak with Maxwell in Vault 118. Maxwell wants you to solve a crime, listen to what he has to say, and examine the shattered brain container module, blood on the floor, can of red paint beside the stage, collect the bat near the couch. Speak with Maxwell to let him know that you found the murder weapon, a baseball bat.

After speaking with the suspects go and search the Overseer’s office. Unlock the door with a bobby pin to speak with Maxwell to learn of a nearby key. Enter the office and access the Overseer’s terminal. Play the holotape and learn of Ezra’s history.

Pay a visit to Bert Riggs in the classroom. Inquire him about Julianna’s behavior before going to Julianna Riggs and accusing her of the crime. Tell her you know what she is hiding, the Robobrain pretending to be Juliana is actually Ezra Parker, the murder victim. You will then have the following options:

Living on the Edge

How to Complete: This side quest starts during Far Harbor’s main quest: Walk in the Park when you speak with Captain Avery. Talk to the people around the Island and help them. Talk to Mariner to start Hull Breach side quest, talk to Cassie Dalton to start Blood Tide side quest. Complete all accepted tasks until Teddy Wright comes to speak to you.

Objectives: Drop meat in the water, kill Mirelurks and their queen, speak with Teddy Wright.

How to Complete: Teddy Wright will point you to a Mirelurk controlled area, visit the area with two pieces of uncooked meat. Throw the meat in the water to lure the Mirelurks and kill two of them to summon the queen. Kill the queen and report back to Teddy to get the Captain’s Hat and Feast.

How to Complete: Help as many Far Harbor citizens as you can to complete The Changing Tide side quest. Speak with Mitch to start The Hold-Out quest, speak with Small Bertha to start to Turn Back the Fog. Speak with Captain Avery after you are done with all accepted tasks.

How to Complete: Speak with Cassie Dalton and visit all marked locations to kill different types of creatures.

How to Complete: Complete Rite of Passage and Walk in the Park to start this side quest. Captain Avery wants you fix some fig condensers. Go to the marked location and locate Howard Dunbar’s body. Kill the Mirelurks in the area and recover the components from Howard’s body. Go to the marked locations and fix the fog condensers. Report back to Captain Avery to complete the side quest.

How to Complete: Mariner is looking for power tools. You can find the tools stashed at Eagle’s Cove Tannery, lower level. You can use a bobby pin to unlock the basement door on the building’s south side or use the front entrance to fight your way to the basement. Recover the power tools and bring them back to Mariner for 450 caps, or find Machete Mike outside the tannery and sell him the tool for up to 2750 caps. However, selling to Mike will damage your reputation with Far Harbor.

If you bring the tools back to Mariner, it’ll trigger Hull Breach II. Clear the trappers from MS Azalea for Mariner to complete the second phase of this side quest. Allow Mariner’s crew to salvage the materials from MS Azalea to start Hull Breach III. To complete the third phase of this side quest, gather 3 Mirelurk Carapaces and deliver them to Mariner. You can find some at Haddock Cove.

How to Complete: To get this side quest you must first complete Rite of Passage. Mitch wants you to find uncle Ken and at the National Park Visitor’s Center. Go and check on him and try to convince him (Charisma) to come live in Far Harbor. Visit uncle Ken but watch out for the traps. Speak with uncle Ken but before you can finish your conversation, Trappers will attack. Kill them all and continue your conversation with uncle Ken. He will ask you to use his Workshop to put up more defenses for the Visitor’s Center. Helping him is optional. Speak with Uncle Ken and try to convince him to come to Far Harbor.

Turn Back the Fog

How to Complete: The quest is available to you once you complete Rite of Passage. Small Bertha wants to find a home for the Harbormen. She has a location in mind but it is overrun by monsters. You need to clear Echo Lake Lumber and clear the Feral Ghouls around the main structure. Some of them are trapped on the upper floor, you use the bobby pin to open the locked door near the center of the building or use the shelves to jump up to the attic. In the attic, there is a Steamer trunk with a Ripper inside which grants you a chance to stagger enemies. Once you clear the building, you will come across Malcolm who claims to be the owner of the Lumber mill. She offers you a chance to leave the area unharmed but you have the following choices:

If you kill Malcolm you can simply return to Small Bertha and tell her everything. If you decide to let Malcolm live, you then have the following choices:

How to Complete: This side quest is available after you successfully complete Hull Breach 3. The Hull is secure but Mariner wants you to take care of a beast that plagues the waters. Known as the Red Death, this beast must be taken care of to complete The Great Hunt. Agree to help Mariner and board Kenji Nakano’s boat and said to the Red Death Island. When you reach the location, get off the boat and speak with Mariner.

The truth about the Red Death is underwhelming and Mariner refuses to return with such an embarrassment. She leaves it up to you how you want to handle the situation. Once you decide what to do, Mariner gives you a unique clothing item that represents a more adventurous tale. After you take the gift vanquish the Red Death and go back to Far Harbor to receive a hero’s welcome.