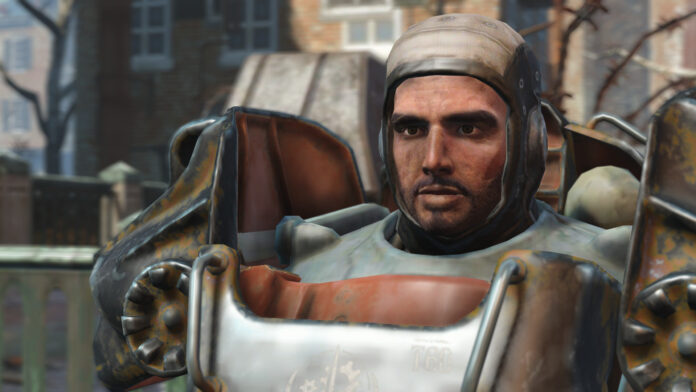 Kill the Ghouls at the entrance and once the area is clear, complete the objective for the Fire Support Brotherhood of Steel quest from this point forward.

Go to the Cambridge Police Station and kill all of the Ghouls that you encounter. Once that is done, talk to Paladin Danse who is the Commander. Agree to help him.

When players get there, they will have to fight through the turret-lined hallway or go to the office nearby and use the terminal to disable them. Follow Danse into the elevator and go to the ArcJet Engine Core.

Once players join the Brotherhood of Steel, Paladin Danse will ask players to the Cambridge Police Station. Once there, players will be introduced to the faction. If players are joining before completing Main Quest: Act II, then they’ll be inducted as an Initiate. If players have started the main quest or completed it, they’ll be inducted as a Knight and the Shadow of Steel side quest will begin.

Player’s Pip-Boy will receive a transmission after a Brotherhood of Steel airship pass overhead. Listen to the instructions and go to the Cambridge Police Station and follow Paladin Danse to the roof. Man the minigun and start shooting at Raider settlements. Once the Prydwen disembarks, talk to Lancer-Captain Kells.

Attend the address of Elder Maxson and then talk to Maxson. Maxson will promote players to the rank of Knight. This concludes the Brotherhood of Steel quest.

The objective of this Brotherhood of Steel quest is to talk to the crew of Prydwen. Players will find Proctor Ingram near the Power Armor Stations. Then go to Proctor Teagan at the supply store and talk to him. This will unlock the Feeding the Troops Radiant quest. Then talk to Proctor Quinlan at his office. This concludes the quest.

Elder Maxson will ask players to talk to Doctor Madison Li at the Institute and convince her to work on a project for Brotherhood of Steel. Find her in the Institute and talk to her. If players have enough Charisma, they can ask her if she’s happy and complete a series of tasks for her to convince her.

Alternatively, players have to find evidence about Virgil’s disappearance from his lab. The lab is in the sealed section of the BioSciences Division. Unlock the FEV lab door but be careful as there will be automated turret security, synths, and an Assaultron. Find the Holotape in the lab and bring it back to Doctor Madison Li. Return to Prydwen and report to Elder Maxson.

Path 1
Proctor Ingram will ask players to find Professor Scara in Diamond City and will also give them Cerebrofusion Adaptor. Go to the Science Center Diamond City Market. Talk to Doctor Duff and she’ll tell players that she hasn’t seen her Scara for over a week. Agree to help her and go to General Atomics Galleria and then go inside the Back Alley Bowling building where players will find Scara. Convince Scara using the Cerebrofusion Adaptor or using Charm
Path 2
If players were successful in convincing Doctor Madison Li, talk to her on the Prydwen at the main deck. After the conversation, she’ll be convinced to help.

Go back to the Boston Airport and access the workshop and open the Special menu. Build the four electromagnetic actuators and players need the following components.

Once crafted, talk to Proctor Ingram and players need to acquire Mark 28 Nuclear Bomb packs for the weapons system. Talk to Scribe Haylen at the marked location and players will be given a distress pulser to pinpoint the location of the nukes once players find them so that Haylen’s team will extract the nukes.

Go southwest into the Glowing Sea and enter the Sentinel Site Prescott. Get to the terminal at the base of the structure and stop the launch sequence. Blast doors will open, open the adjacent blast door go through the cylindrical and concrete tunnels.

Players will encounter Brother Henri and Atom’s Wrath at the warehouse control room. Kill them or use your charm and food them into thinking you revere the Children of the Atom cult. If you kill them, then take the password from Henri’s corpse. Unlock the terminal and open the doors. Go back to Proctor Ingram and report to her and take your reward.

Go to Prydwen and talk to Elder Maxson, he has a new mission for you. The objective is to find Paladin Danse and clear the confusion. Proctor Quinlan has a way to track him. After that, talk to Scribe Haylen. Go to northern Commonwealth wilderness and locate Listening Post Bravo. Go to the elevator but be careful of the turrets. There is a small Protectron presence and Paladin Danse is close. From here, players have two options.

The first option is to kill Paladin Danse as soon as you see him or if your persuasion fails using a threatening tone, follow his last orders and bring his Dog Tag to Elder Maxson and you become the Paladin.

The second option is to speak to him with friendly answers and reduce to kill him. When given the option, use persuasion and it’ll succeed. Then leave Listening Post Bravo and you’ll be interrupted. Here players can agree to the person and kill Paladin Danse or convince them to leave him alive. Then return to Prydwen and inform Elder Maxson. Players will receive the rank of Paladin.

This Brotherhood of Steel quest will get you kicked out of the Railroad faction. So before you talk to Kells, complete any remaining activities relating to the Railroad faction. Go talk to Lancer-Captain Kells and agree to his orders and go to the Old North Church. Players have a kill list so start checking it off.

Once that is done, return and report to Lancer-Captain Kells. If players reprogrammed PAM, it’ll be transported to Prydwen. if destroyed, then there will be some disappointment.

Talk to Proctor Ingram and agree to find Beryllium Agitator from Mass Fusion. Players can either do this quest for Brotherhood of Steel or go to The Institute and change their loyalty.

Once decontamination is done, go into the reactor chamber and press the interlock release and activate the agitator receptacle. Grab the Beryllium Agitator and the facility defenses will activate. Use the ID card to open the main door and defeat enemies along the way. Exit through the lobby and go to Boston Airport and talk to Proctor Ingram.

Another one of Brotherhood of Steel quests. In this quest, talk to Proctor Ingram and then ascend the scaffolding and insert the Agitator in the war machine’s reactor port. Then go to the gantry computer and press the button to transfer power. After that, escort the Liberty Prime through the streets of Boston and eliminate any synths you find and continue until you reach C.I.T. ruins. Kill more synths here and then the war machine will make a hole for you. Drop into it.

This Brotherhood of Steel quest in Fallout 4 starts immediately after Ad Victoriam. Go through the Old Robotics area and expect synths and laser turrets. Go to the hatch and drop through it to enter the Institute BioScience laboratory. Go to the reactor entrance but the blast door is activated.

Go to the central elevator and press the button and enter Father’s quarters to get the override password from him. Use the password to activate the Master Security Lockdown Override.

layers can either take him under their wing or tell Proctor Ingram that the child will remain here. Players will then teleport to the roof of the Mass Fusion building and here they’ll finish the quest.

Speak with Elder Maxson at Prydwen. Players are granted the rank of Sentinel and a jetpack is awarded. From this point forward, Brotherhood of Steel Radiant Quests will become available.