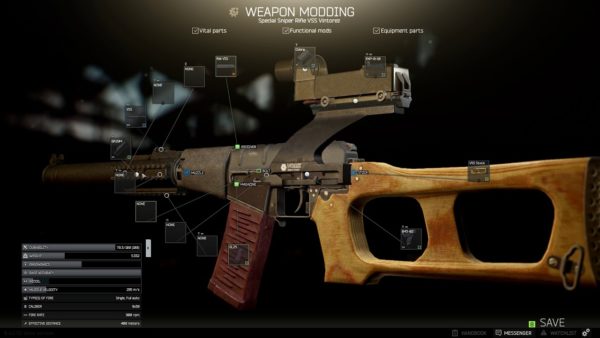 The size of Escape From Tarkov is huge and there is so much to understand especially when it comes to gear and weapons. There are over 60 weapons in Escape From Tarkov. Moreover, you can modify these weapons and create the best loadouts.

Following are the best Tier 1 weapon in Escape From Tarkov, these weapons are powerful and are able to pierce armor is used with the right ammo.

The United States made M4A1 is a popular weapon and you must be familiar with it if you are played the recently released Call of Duty Modern Warfare. While it isn’t unbalanced and overpowered in this game but still, it can do some serious damage in Escape From Tarkov.

If you are a fan of Sniper Rifles this one is one of the best ones in Escape From Tarkov Tier 1. The United States branded weapon can pierce through armor easily. Its Semi-Auto nature gives the player a tactical advantage in the game.

Another Russian made weapon, this Assualt Carbine weapon comes with an integrated suppressor of a great stealth weapon among the Tier 1 Weapons in Escape From Tarkov.

While I hated this weapon in PUBG, it ain’t too bad in Escape From Tarkov which is why it made it to our best Tier 1 weapons list. The Russian made weapon is a special suppressed sniper rifle with high shell drop off. It is a rapid-fire Sniper.