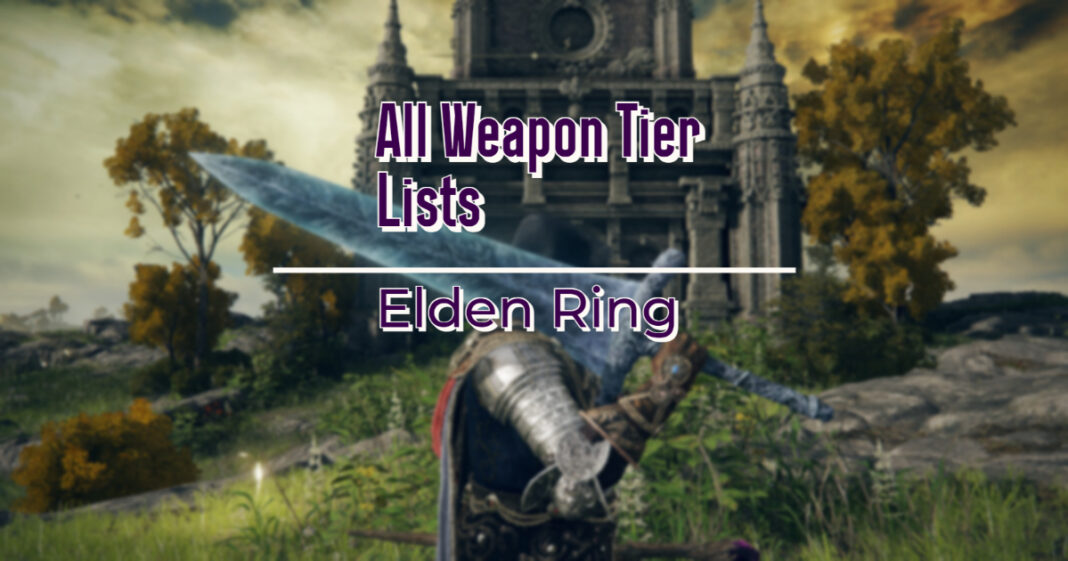 Elden Ring is one of the few games with a ridiculous number of weapons. There are swords, daggers, spears, shields, and much more to use against the most formidable enemies in Elden Ring. With such a large selection of weapons at your disposal, it becomes difficult to figure out the best weapons in Elden Ring. Hence, we have curated the following Weapons Tier List for Elden Ring players.

Swords: These are large two-handed weapons with a lot of damage and wide range. They are heavy and slow but effective when attacks are timed right.

Katanas: These are fast, lightweight single-handed weapons. They allow you to land quick and precise strikes that are most effective against single enemies but not much against groups.

Spears: These weapons create distance between you and the enemy using their long range. Spears are effective against giant bosses and world enemies.

Bows: These are ranged weapons that help you attack enemies from a greater distance. They are especially effective against flying enemies. Apart from bows, you can use Greatbows that are more effective in combat.

Types of Bows: Elden Ring has Great Bows in addition to the basic bows you can use.

Crossbows: These are ranged weapons with high damage and are effective against most enemies in Elden Ring.

Shields: These are used for defensive purposes, such as blocking enemy attacks to protect yourself from damage.

Dagger: These weapons allow you to get close to the enemy to deliver quick and precise strikes. Daggers are lightweight and are effective against single enemies, not groups.

Axes: These are two-handed weapons with great damage and wide range. Like Greatswords, Axes are most effective against giant bosses and world enemies.

Hammers: These are heavy two-handed weapons that deal a ton of damage.

Types of Hammers: Elden Ring only has Great Hammers in addition to the basic hammers you can use.

Whips: These are close to mid-range weapons that deal low to moderate damage. Whips aren’t effective against armored enemies and can’t land crits.

Fists: These are close-range weapons worn on your character’s hands. Fists allow you to make rapid attacks on the enemy.

Halberds: These are long, polearm weapons with a blade attached to the end. Halberds can deal heavy damage at close range, but they can also be thrown at the enemy to deal ranged attacks.

Reapers: These are giant reaper sickles you can use for close-range attacks and even deal damage behind shields.

Claws: These are bladed weapons with a curved, serrated edge, made to be worn on the hands for close ranged quick and precise strikes.

Glintstone Staffs: These staffs are used to cast spells in Elden Ring.

Ballistae: These are ranged weapons that do high damage.

Twinblades: These are hack-and-slash weapons that can be wielded in one or both hands.

Colossal Weapons: These are massive weapons that deal a ton of damage but are slow and require Strength to wield.

Our weapons Tier List for Elden Ring is divided into Tiers:

F-tier weapons are useless, but if you want an extreme challenge, then this tier works. Otherwise, go with any other tiers and create the right build for your weapons in Elden Ring. Want to read more about Elden Ring? Here are some guides you may like: