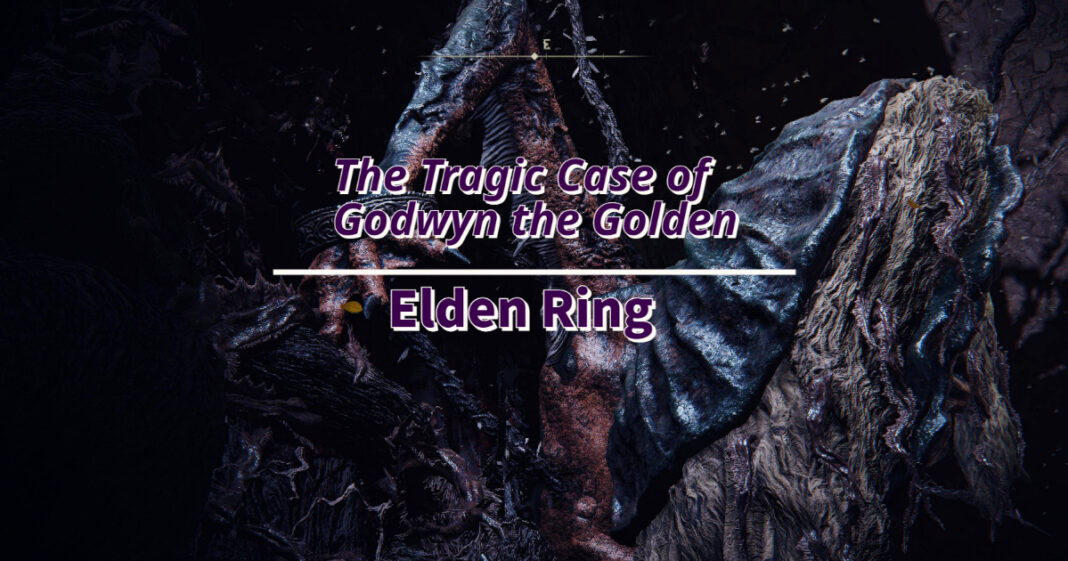 We discussed the Family Tree of Elden Ring recently, but many of you wanted to know more about the (tragic) story of Godfrey the Golden, one of the demigods. Godwyn is not just any demigod; he is the son of the First Elden Lord Godfrey and the most powerful ruler of the Lands Between, Queen Marika. This article will discuss everything you should know about Godwyn the Golden, including where to find him, what happened to him, and his story.

What Happened to Godfrey the Golden

Godwyn was the first of the “Golden Line,” which ended when the player killed Godrick the Grafted, the final descendent of Godwyn the Golden. Sadly, the demigod died during the Night of Black Knives under the reign of Queen Marika. His step-sister Ranni set up the fall of Godwyn to counter the Greater Will and be free.

His assassination during the Night of Black Knives led to his body being buried in the Erdtree in Deeproot Depths. His body became bloated, malformed, and toxic, with a fishy smell. However, Godwyn isn’t exactly dead but isn’t alive either. His body is preserved, and he is believed to return someday (Elden Ring 2?).

The corruption of his undead corpse is spreading in the Land Between, giving birth to the Deathroot. Some part of his corruption had spread inside the Stormveil Castle, which led to many deaths and the rotting of Rogier’s legs, who eventually died and left the player with Spellblade’s Pointed Hat.

Fia, who can be found at the Roundtable Hold, is close to Godwyn and is nothing short of a Maiden of Godwyn. Her questline is tied to Godwyn and bringing true death to the Lands Between. As it currently stands, no one truly dies in Elden Ring and only goes to the Erdtree to feed it and then return to life. That can change if Fia is to be believed.

Where to Find Godwyn the Golden

Godwyn in Elden Ring is located in the Deeproot Depths, infused with the Erdtree. Head north from the Ancestral Woods Site of Grace and follow the Spectral Jellyfish to locate another Site of Grace. Drop down and go near the waterfall where the Two Gargoyles boss fight starts. Enter through the waterfall after the boss fights and ride down the coffin to reach the Deeproot Depths. Make your way to the Nameless City and head northeast to the Prince of Death’s Throne.

Godwyn and the Japanese Myth of Ningyo

Developer From Software took inspiration from nay mythologies for its previous games and Elden Ring. But as far as the story of Godwyn goes, it seems the Japanese myth of Ningyo inspires it. In Japanese mythology, Ningyo is a fish-like creature, similar to a mermaid. Eating its flesh results in a cursed unnatural long life, similar to how Godwyn corrupts the Lands Between with Deathroot. The myth of Ningyo has a history in From Software games; Sekiro’s game files refer to Divine Dragon as a Ningyo. Meanwhile, Bloodborne Kos has been compared to a Ningyo.

Godwyn and the Norse Myth of Níðhöggr

Another theory is that the north myth of Níðhöggr inspires Godwyn. Both are creatures gnawing at the roots of giant trees, but Godwyn has no other known similarities to Níðhöggr. It is possible that developers took inspiration from both Ningyo and Níðhöggr to create the lore of Godwyn the Golden in Elden Ring.

That concludes the tragic lore of Godwyn the Golden, the first son of Queen Marika.