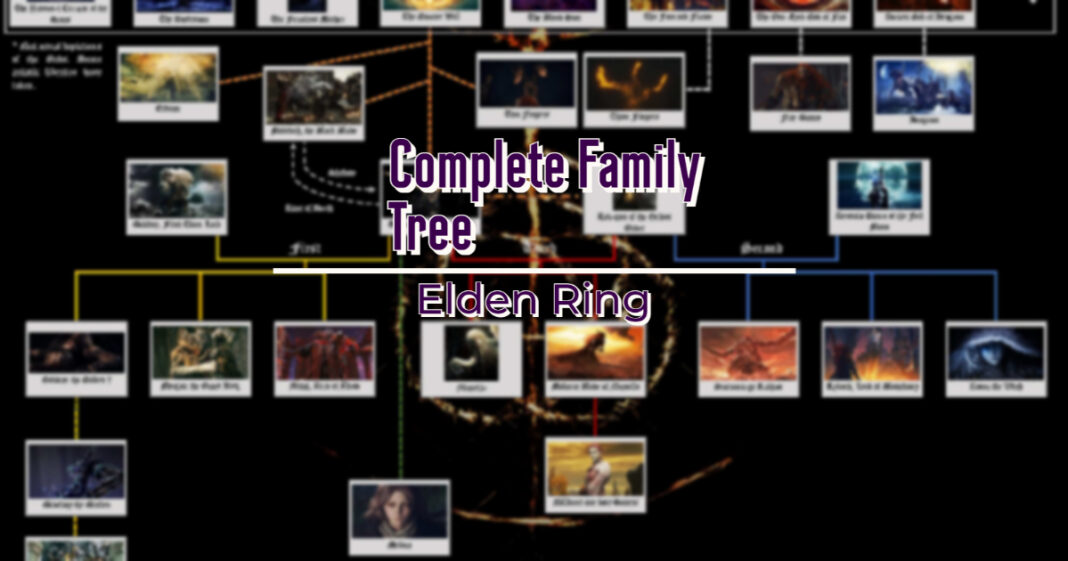 Due to intertwined storylines and similar names given throughout this journey, it cannot be easy to recognize who is related to whom in Elden Ring. Understandably, players face many difficulties in deciphering the connections between these characters to appreciate their interconnectedness within the story entirely.

The Night of Black Knives concluded, and Queen Marika pushed to her limits; she succeeded in shattering the Elden Ring. Her children collected all of its shards and formed them into Great Runes. This event sparked a significant war called “The Shattering” that no one survived unscathed – each child wanted control over The Lands Between for themselves. Before the commencement of conflict, the foundations for Elden Ring’s narrative had been laid. Subsequently, a story emerged from these origins.

Queen Marika is at the core of Elden Ring’s tale and catalyzes all that transpires before and during the game. Her wide range of relationships within her family has enabled their long-standing hierarchy, making matters more complicated when her identity comes into play.

I’ll tell you the Complete Elden Ring Family Tree in this guide.

Queen Marika The Eternal and the Men Who Courted Her

Godfrey was incredibly privileged to wed Queen Marika, who had never married. As a result of this marriage, he gained the title ‘First Elden Lord’ and made great contributions in empowering Erdtree during the war years – predominantly against Giants from the North. However, when Queen realized that Godfrey’s presence was no longer beneficial for her, she banished him and cast him among The Tarnished; those whom Elden Ring shuttered off its grace from and sent away to an isolated land far beyond Erdtree.

Subsequently, Marika opted to select Radagon as her consort. His association with the Golden Order gained him immense loyalty from its troops; this was reflected multiple times throughout the Lands Between. As a result of this alliance, he garnered himself the title – of ‘Second Elden Lord.’ It is rumored that both Marika and Radagon are one person – though their link remains nebulous. This incident underscored two prime points: Queen Rennala’s union with Radagan in Caria and any potential relationship between them and Marika.

The union between Queen Marika and the esteemed Elden Lord Godfrey marks a glorious beginning, later known as the renowned Golden Lineage. Blessed with three children (Godwyn, Morgott, and Mohg), they all gained adoration from their mother. Amongst them all, though, it was clear to see that Godwyn – The Golden – held an extraordinary place in Marika’s heart.

Dante’s Inferno’s Cerberus inspired Godwyn. He became the first demigod to ever lose his life during the Night of the Black Knives, and a nefarious husk overtook his body – thus earning him the title Prince of Death. Following this tragedy, Marika had two twin offspring – Morgott and Mohg – who inherited Omen blood coursing through their veins, an anomaly seen as a curse during Erdtree’s Age. Consequently, these siblings were forced into exile under Leyndell’s sewers: The Capital City.

Morgott and Mohg have mysteriously vanished, leaving Godwyn as the only survivor with progeny. However, we know nothing about how many offspring he had. It is speculated that distant relative Godrick of the Golden Lineage may be receiving aid from Morgott in disguise as Margit the Fell Omen – which could mean there’s at least one great-great-grandchild of Godwyn alive today! Since this hypothetical descendant has minimal resources compared to their peers, it shows a clear link between them and their ancestor Godwyn.

Queen Rennala and Radagon (The Union)

Queen Rennala and Radagon’s marriage bore three children, Lord Rykard, Starscourge Radahn, and Ranni the Witch. All of them have inherited their father’s deep red hair. Unfortunately, it is difficult to tell if they share any features with their mother since her mortal body was destroyed; this has only increased speculation surrounding the mysterious Elden Ring by raising even more questions about Ranni’s birth as an Empyrean. The Empyreans were said to have been birthed from one divine being and chosen by Two Fingers to take Marika’s place as the god of the upcoming era. Although there are many tales about them, the most well-known is that Ranni was created from The Great Rune of the Unborn.

After the Radagon and Marika united in marriage, they were no longer two separate beings; instead, one being with a single identity. This resulted in Ranni’s ascension to Empyrean status. Upon Radagon’s rift from his initial matrimony and the gifting of Great Rune to Rennala, it became clear why both Rykard and Radahn – two heroes shrouded in mystery within Elden Ring – rose so significantly in power. It is clear that through this marital union ran deep magic which granted them demigodhood qualities thereafter!

Marika and Radagon (The Offspring)

After Marika and Radagon tied the knot, he became the Second Elden Lord. They soon had two twins: Malenia and Miquella, born with Empyrean status. These children inherited their father’s red hair, which progressively lightened to a golden blonde as they grew up – taking after their mother. Just as in her first marriage, Marika was blessed with twins. But this time, there was a sinister twist; Malenia and Miquella were cursed from birth! Malenia’s curse of the Scarlet Rot slowly ate away at her body as she aged, while Miquella suffered from eternal youthfulness – never able to reach adulthood.

Desperate to find a way to cure his sister, Miquella tried every remedy imaginable – but nothing worked. This ultimately led him down the path of forsaking The Golden Order and leaving behind Erdtree forever. To find the antidote for Malenia’s Scarlet Rot, Miquella found Haligtree as an alternative host for Elden Ring’s true parasite. Through this method, he could mature into adulthood and ultimately cure his sister’s cursed disease. Unfortunately, the horrifying Shattering had just commenced when Mohg, his step-brother, snatched him from the Haligtree. The entire plant was felled in a single shot soon after he was taken captive.

The Melina origins remain an enigma, with few details available. However, the mysterious Finger Maiden serves as a guide to the player and attests that her role was bestowed upon her by Queen Marika of Erdtree.

Other Members of the Family

There is more to the lore of Elden Ring than just the central family situation. Other family members want to rule the land, including Marika’s half-brother, Maliketh. The story of Maliketh is sad; he was put in charge of the Rune of Death by Marika, but Ranni stole traces of it. Maliketh lived the rest of his life in shame for failing Malika. His loyalty to her was unmatched.

A demigod, Godrick the Grafted, whose ancestry links to Marika, Godfrey, and Godwyn. He is separated from his ancestors for generations and is supposed to be the last member of the Godwyn family, according to Kenneth.

That’s all we know about Elden Ring family tree; if you have something to add, let us know in the comments below. If you need more help, here are some more guides you might like: