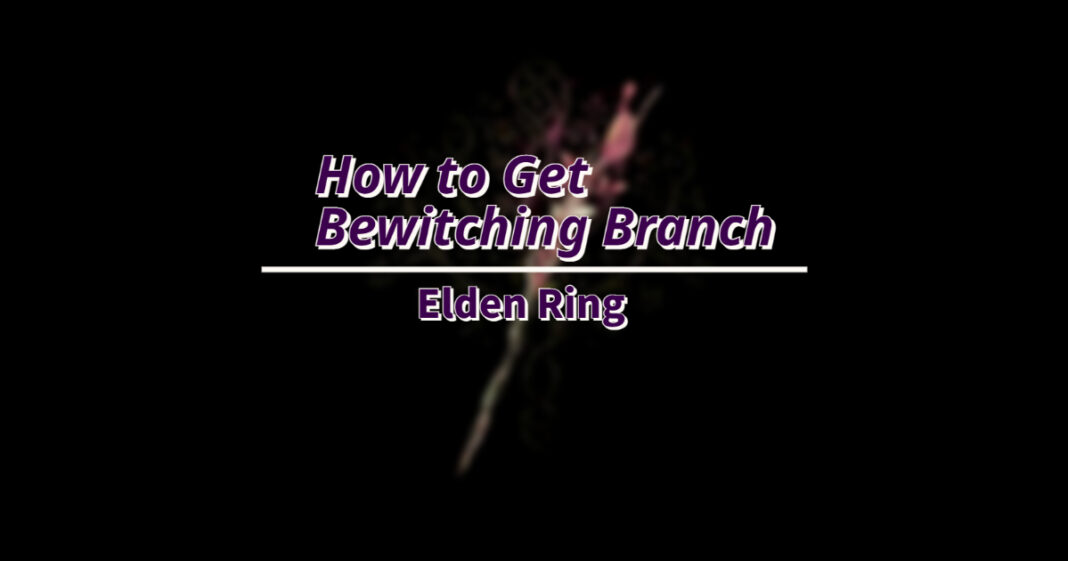 This rare consumable grants you temporary healing and restorative buffs, but that’s not why it is a sought-after item. The Bewitching Branch can charm enemies for a short period (uses FP). We will discuss its charming abilities below, but first, let’s talk about where to find the Bewitching Branch.

How to Find and Craft Bewitching Branch

There are multiple ways to get your hands on the Bewitching Branch:

The first method of getting the Bewitching Branch is purchasing it from the Nomadic Merchant. There is only one Nomadic Merchant that sells it, and he is located in the Bellum Church. He only has five branches in stock, so you can’t buy more once he runs out. It will cost you 1600 runes per branch.

Branches are hiding at different locations in the Lands Between. You can loot a body northwest of the Church of Pilgrimage to acquire three Bewitching Branches. Find the broken pillar next north of the church and reach the top. To the north side of the pillar is another pillar you can jump down to. Reach the lower cliff where two bodies are waiting to be looted, but only one has what you’re looking for.

The final method is crafting the Bewitching Branch by finding Fevor’s Cookbook [3]. You can acquire this cookbook from Gideon Ofnir at the Mohgwyn Palace. You can reach the palace by playing Varre’s questline or using the waygate at the Consecrated Snowfield. To craft Bewitching Branch in Elden Ring, you need Sacramental Buds and Miquella’s Lilies. Sacramental Buds are found in Caelid and the Writheblood Ruins in Altus Plateau, while Miquella’s Lillies are found in Sellia, Town of Sorcery, and Dragonbarrow in Caelid.

The buffs from Bewitching Branch last between 15 to 30 minutes, depending on the game’s difficulty. It should also be noted that the charming effect doesn’t work on all enemies in Elden Ring, especially bosses. The enemies easily charmed with this item are Banished Knights, Cleanrot Knights, both Nialls, and Battle Mages. Remember that the enemies you can’t put to sleep can’t be charmed.

Enemies are charmed for 3 minutes and form a pink cloud on their heads. Charmed enemies won’t attack you, but their attacks can damage your character so stay out of the way. Moreover, charmed enemies can be healed and buffed.

That’s all you need to know but if you want more help with Elden Ring, here are some guides you might like: