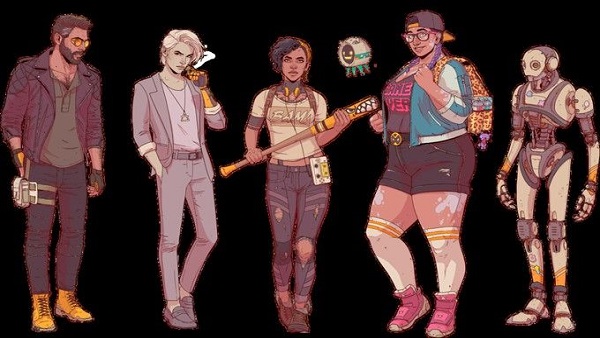 Dustborn boasts one of the most diverse cast of characters in recent memory. There is a robot, a bearded man, an albino, a pluse-size person of color, and a black female lead character who’s four months pregnant.

Such a mix of characters instantly trigger the alarm bells for some who are quick to brand such products “SJW propaganda,” “especially on YouTube, we got a lot of, ‘Oh, it’s SJW: The Game,'” says game director and narrative designer Ragnar Tornquist.

Dustborn revolves around a road trip and the power of words; how people use language to control situations, how our words according to context. Dustborn is going back to the old-school “choice-and-consequence” design. Dustborn is the evolution of the studio previous title, Dreamfall.

It’s more sort of relationship-focused this time around, instead of doing dramatic events of life-and-death decisions – much more about people and how they relate to each other.

All characters of the game travel together in a van across the Divided States of America, trying to escape fanatics and authoritarians. Their goal is to deliver a mysterious package. The game is set in 2030, three decades after the broadcast that started the justice-controlled American Republic. Each character will develop strong relationships during the long journey. Your choices will mold and shape every relationship. Dustborn brings its unique cast of characters to next-generation consoles in 2021. The game will also be available for PC through Stream.