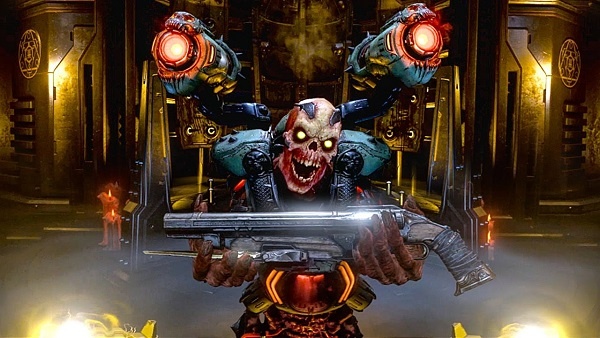 Doomslayer has plenty of weapons in his arsenal to choose from. All of these DOOM Eternal weapons are unique to use, are highly situational, and come with a range of mods and upgrades that make them fun to use. In this guide, we’ll go over everything you need to know about different weapons in the game.

The following are all the weapons, weapon upgrades, and mods that you can find in the game alongside some tips and strategies to help you make the most out of them. Do note that you unlock all of these DOOM weapons as you progress through the game.

1. Combat Shotgun
This is the weapon you start the game with. Combat Shotgun can deal a decent amount of damage and is a good choice for clearing adds and fodder. You’ve got a few mods for the weapon which are explained below:

2. Heavy Cannon
Heavy Cannon is your staple Assault Rifle in DOOM Eternal. If you like the fast-paced playstyle of the game, you won’t be disappointed with the weapon. It can deal pretty damage to weakspots and can also deal with agile demons – something a Combat Shotgun can’t do effectively. It also comes in a couple of Weapon Mods which include:

4. Rocket Launcher
As the name suggests, the Rocket Launcher can burst out an incredible amount of splash damage in no time. It’s highly effective against bosses and clearing out a large group of fodder quickly. As good as it is in its default state, there are a handful of really interesting mods that you can use with the Rocket Launcher. These include:

5. Super Shotgun
While the Super Shotgun and the Combat Shotgun belong to the same weapon archetype, these two weapons are vastly different when it comes to stats. With it equipped, you should be able to go into the heart of the battle (DOOM-style) and start clearing adds. It only has a single mod which further increases the gun’s efficiency.

6. Ballista
Ballista in DOOM Eternal can penetrate through fodder and deals extra damage to Energy Shields, kind of like the Plasma Rifle. In addition to this, the gun also dishes out increased damage to flying demons. Ballista also comes with a couple of mods which are:

7. Chaingun
Chaingun in the game is the perfect blend of damage, range, and splash. You can use this to stop roaming demons in their tracks. If you don’t want to run around with the gun, you can easily transform it into a Mobile Turret and tank some incoming damage:

8. BFG 9000
The iconic weapon from the DOOM franchise, you can unlock this weapon by checking our BFG 9000 guide. It’s a special weapon that doesn’t include any mods or upgrades.

These are all the DOOM Eternal weapons that you can find in the game. You can check our complete coverage of DOOM Eternal by heading to our wiki.