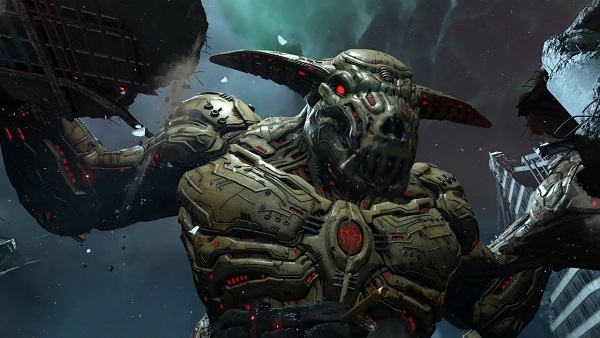 Cladded by armor and powered by Maykr, Icon of Sin is the final boss in DOOM Eternal. It’s a 2-phase boss fight that tests your firepower, endurance, and patience. In this guide, we’ll go over everything you need to know about defeating Icon of Sin.

How to Beat Icon of Sin in DOOM Eternal

As mentioned earlier, the fight with Icon of Sin is divided into 2 phases. During the first phase, you’re required to break his bodyarmor and kill the actual Icon of Sin in the second phase.

While all of this is happening, you’ll have to deal with lesser demons, Barons and Tyrants swarming the area.

Relying on your entire arsenal isn’t a bad idea but there are a few weapons that seem to work better than the others. These include BFG 9000, Crucible, Super Shotgun, and Chaingun.

Icon of Sin has 8 weakpoints (bodyarmor and limbs) that you’ll need to destroy to defeat him:

Successfully destroying a piece of armor will expose a glowing red limb underneath it. Do note that there isn’t any point in damaging the exposed limb before you’ve destroyed all 8 pieces of Icon’s armor.

Always take note of “Armor Section Destroyed” on the top-left of the screen to keep track of your progress. IOS’s health bar is displayed at the very top of the screen. Now that we understand how the boss fight plays out, let’s talk about some tips and strategies to easily defeat Icon of Sin.

Icon of Sin Tips and Strategies

Icon of Sin has a few attacks up his sleeve. Luckily, the arena has a lot of cover that you should consider using to your advantage. The following is an overview of his attacks:

Like always, BFG 9000 is king. The weapon is capable of doing huge damage to IOS’s bodyarmor as well as limbs and you’ll find plenty of ammo in the arena. Crucible, on the other hand, is an excellent add-clearing weapon.

You’ll need to make sure that you’re constantly on the move in order to prevent getting swarmed by the adds. If you’re low on HP, dash to one of the jump pads to get to another side of the arena to replenish HP and armor. Other than that, it’s just a game of dodging, clearing adds, and destroying Icon’s armor/limbs.

After destroying Icon’s bodyarmor, you’ll have to take a teleport to another location where you’ll destroy his limbs. Once done, perform the final Glory Kill and sit back for an epic ending.

This is how you can defeat Icon of Sin in DOOM Eternal. Feel free to check our complete coverage of DOOM Eternal by heading to our wiki.