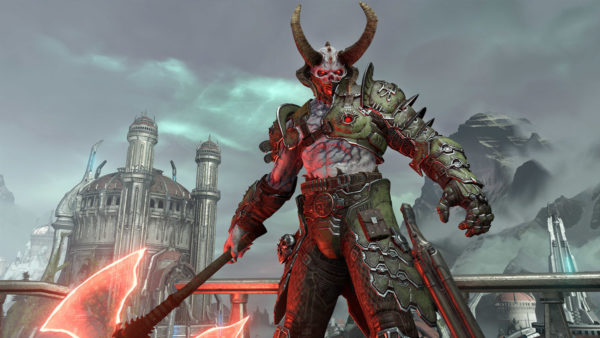 Our Doom Eternal Cultist Base Collectible Locations guide will help you with all of the hidden collectibles that you can find on this level including toys, sentinel batteries, and more.

Like all the level on Doom Eternal, Cultist Base has a lot of collectibles for players to find. Of course, many of them are hidden and that is where our Cultist Base Collectibles Locations guide will help you. The following are the collectibles that you’ll find on the Cultist Base.

As you start the level, the “Cultist Base” codex is to your right.

Early in the level, you’ll climb a wall with mines on it. After that, double dash to the big skull hanging in the air and pick up the Gargoyle toy.

Complete the first demon encounter and go the right. There is a wire hanging down. Drop down to the ledge below and shoot the explosive next to the frog to reveal the extra life.

The same area as Extra Life #1. From where you dropped, turn right from the corner and there will be a cracked wall on the platform above. Break through the wall and use the switch and a gate will lower leading to a vent. Use it to shoot yourself up and dash to grab the sentinel battery.

After dealing with the first Mancubus, the Token is right in front of you while you leave.

After you battle the first arachnatron of this level, shoot the target to the right and it’ll open up a gate that leads to a climbable wall. Use the wall to jump to the platform and pick up the 1-up.

After using the cultist key and defeating the first shielded enemy, drop down to the right. Swing to the left and shoo the frog for the extra life.

This will be on your main path and can’t be missed.

This Doom Eternal collectible is also on your main path after the Whiplash demons.

This one is half-way down the icy slope with the shield soldiers. To the left is a created wall, punch through it and pick up the Praetor Suit Token.

After you’ve faced a large group of demons, you’ll go up the ramp. The battery is to the left side after entering the building.

Opposite of the Sentinel Battery #2 is a switch, punch it to lower some poles. Time your jumps, swing and grab the grate high up. Turn around and jump to the extra life.

As you progress through the level, you’ll use a switch to open a gate and the crystal will be directly in front of you.

In the same room as Sentinel Crystal #1.

You’ll come to an elevator going up and down. Go down then follow the path and climb the crates and drop to the other side to pick up the token.

After climbing on top of the elevators, go the left and into the other elevator when it moves down. As the elevator reaches up, exit and pick up the battery.

After acquiring the super shotgun and killing all the demons in the room, some poles will appear. Swing on the poles, double jump and turn around mid-air then dash to the platform to pick up “IDDQD” cheat code.

In the area where axes are slamming on the ground, look to the right after the 2nd axe. Punch the vent to reveal the “Solider Blaster” toy.

In the room where you raise a large skull, jump on top, turn around and then jump across the gap to pick up the Praetor Suit Token.

When you reach the are where two spoken walls smash into another, the secrete encounter is behind a cracked wall to the right.

In the room with clamping spiked walls, get to the other side and turn around. Jump across to get the extra life.

After collecting Extra Life #5, go straight ahead and then go left past the crushing wall and find the “DOOM II Into Sandy’s City” album.

After you leave the room wit crushing walls, go to the far right corner of the area. There is a small cave you can jump down to. Go down and press the switch to the right to reveal the hidden extra life.

Break through the giant yellow wall and below the wall to the right is another climbable wall. Follow the path to the Slayer key.

Pick up the slayer key and then jump down and then to the right to the slayer gate. Open it and win the demon encounter. After that, the Empyrean Key will be yours to take.

As part of the main campaign, you’ll return to the area with a statue of Deag Ranak. Go through another door here and you’ll find the token by following the path to the right.

That is all for our Doom Eternal Cultist Base Collectibles Locations with tips on the locations for extra lives, Slayer key, Praetor Suit Token and more. For more on the game also see our Sentinel Battery Locations Guide and How To Beat Khan Maykr.