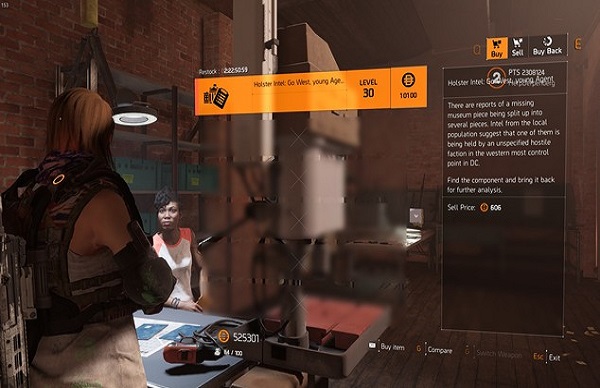 With The Division 2 TU4 rolled out on the live servers, the game now has its first piece of Exotic Gear: a holster called the Dodge City Gunslinger Exotic Holster alongside the new Gunner specialization. It’s a pretty good holster given the fact that it can work with different niche builds. It’s definitely not a must-have holster for every build out there, especially if you’re chasing certain Attributes/Talents, but there are other Exotic Armor pieces on the way (hopefully!).

One important thing to note about the Dodge City Gunslinger Exotic Holster is that you can equip with Liberty Exotic Pistol, making it one of the better holsters for pistol builds. You can also use it to replace holsters with “Fill ‘Er Up” (LMG builds) since you’ll reload both your LMGs faster with the Exotic Holster equipped.

Before we begin talking about acquiring the Exotic Holster in the game, let’s talk about Talents and Mod Slots available. There are no Attributes on the said holster. The holster comes with three Talents:

There are one Utility and two Offensive mod slots. With that out of the way, let’s talk about how to acquire Dodge City Gunslinger Exotic Holster in The Division 2.

The first thing that you need to do is to go to Blueprints Vendor in the Base of Operations (near Crafting Station) and purchase a Project called “Holster Intel: Go West… Young Agent”. It should cost you around 10,000 in-game Credits. The said Project requires you to take over the westernmost Control Point called “Riverside Gas Station”. You don’t need to level up the Control Point and can take it over at Level 1 to complete the step.

Once you’re done, you’ll receive the “Fast Leather Belt” component inside the reward cache upstairs. Turn in the Project and get the next one called “The Good, the Bad, and the Evil”. This one requires you to collect three more components which are locked behind Level 4 Control Points belonging to the game’s three main Enemy Factions i.e. Hyenas, True Sons, and Outcasts.

Assemble your squad and take over Level 4 Control Points belonging to each of the aforementioned Enemy Factions. You should be able to see a Named Enemy wearing a cowboy hat in the final wave. The following is a breakdown of which components you can get from these Control Points:

With a total of four Exotic Pieces in your inventory, return to the Base of Operations and acquire another Project called “Showdown at High Noon Saloon”. To complete this Project, what you need to do is to head over to the southeast of the White House to a bar. However, there’s a little catch. You must show up at the bar a little after 12:00 PM in-game time. You can check the in-game time by opening up the Photo Mode and looking at the bottom-right of the screen.

If you show up the right time, you should be able to see a few Black Tusk guys inside the bar (right next to an Echo collectible). You simply need to eliminate these men followed by another Named Enemy in a cowboy hat to get the final piece called “Holster: Rind”. Once done, return to the Base of Operations to acquire the Exotic Holster blueprint.

In order to craft Dodge City Gunslinger Exotic Holster in The Division 2, you need all the parts that we just acquired, one Providence Holster, and one Petrov Holster. If you don’t want to dismantle your current pieces, you can always craft them at the Crafting Station, provided you’ve required materials.

This is all we’ve in our Division 2 Dodge City Gunslinger Exotic Holster. Now you can work on your pistol builds, Agents!