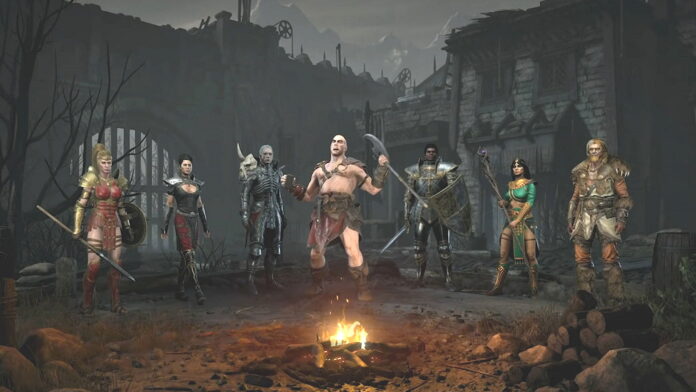 Fans of the Diablo franchise love Diablo 2 and it’s also considered the best in the franchise. With Diablo 2 Resurrected, the game is back with updated visuals, lighting, and more. However, the Diablo 2 Resurrected PC version is facing errors and issues like Failed to initialize Graphics Device, the application encountered an unexpected error, in-game crash, NVSDK_NGX_D3D12_Init failed, audio stuttering, and more. The following are the errors and issues that PC players are experiencing with the game along with their fixes and workarounds.

Alternatively, players can just disable the iGPU from the Device Manager so that the dedicated GPU is only available for the game.

PC players are reporting that they are unable to play Diablo 2 Resurrected because of the game crashing at startup and following by the “application encountered an unexpected error” error message and here is how to fix it.

One reason for this error is the OS. The game doesn’t really support Windows 7 and if you are using it, you have to upgrade your OS to play it.

Also, older CPUs that don’t have the AVX Instruction set are also facing this error. The game required AVX Instruction Set to run and without a CPU upgrade you won’t be able to play Diablo 2 Resurrected. Make sure your CPU supports AVX.

In case your meet the above requirements, then open the Diablo 2 Resurrected folder and find its exe. Right-click it > Properties > Compatibility tab > check “Run This Program as administrator” and hit apply. This will fix the Applicated Encountered Unexpected Error with the game.

Diablo 2 Resurrected PC players are reporting the following error and are unable to play the game. Here is how to fix the D3D12 Init Failed error.

Also, this particular error is caused by Nahimic software and it has a few forms like MSI Nahimic, Alienware Surround Sound, and Asus Sonic Studio. If you have any of these software installed, then delete them to fix the NVSDK_NGX_D3D12_Init failed error.

Another thing to note is that Diablo 2 Resurrected can only be played on GPUs with DirectX 12 support. If your GPU doesn’t support DX12, it can cause this error. Make sure your GPU supports DX 12. If not, then you have to upgrade your GPU.

Diablo 2 Resurrected PC players are reporting that when they launch the game they get a black screen after into videos with the audio playing in the background. One reason behind this black screen issue is that the PC doesn’t meet the game’s system requirements. Make sure your PC meets the game’s requirements.

If you aren’t using any third-party software, then open Nvidia Control Panel > Manage 3D Settings > Program Settings > select Diablo 2 Resurrected. Scroll down and select “Fast” for Vertical Sync and apply the change. Launch Diablo 2, disable in-game Vsync, and make sure you are playing in Fullscreen mode. This will fix the audio stuttering issue with Diablo 2 Resurrected.

Diablo 2 Resurrecte PC players are reporting that the game is crashing while playing and here is how to fix this issue. One cause of the in-game crash is the use of third-party software like MSI Afterburner, RGB software, or more. Disable any third-party software you have installed and also disable Steam in-game overlay or GeForce Experience overlay. This will fix the in-game crash issue.

Try reinstalling or updating the GPU driver and make sure o do a clean installation to fix the in-game crash issue.

If the above fixes didn’t work, then your GPU is the cause of the Diablo 2 in-game crash. The GPU is either overclocked or not able to handle the game’s load. If the GPU is overclocked, revert to its default GPU clock.

In case the GPU isn’t overclocked, then your GPU is either old or is not handling the game’s rendering load really well. In any case, use MSI Afterburner and reduce the GPU clock by 100 MHz or try to lower the graphics settings to reduce the GPU load.

Alternatively, players can cap the game’s Max FPS to fix the in-game crash. Open Nvidia Control Panel > Manage 3D Settings > Program Settings > select Diablo 2 Resurrected. Enable Max FPS Limit and set the value for it. If you are currently targeting 60 FPS, then cap the game to 30 FPS. In case you are playing at an unlocked FPS, cap the game to 60 FPS. This reduces and CPU and GPU load and stops the game from crashing.

That is all for our Diablo 2 Resurrected fixes for errors and issues like Failed to initialize Graphics Device, audio stuttering, in-game crash, and more. If you are facing errors and issues with other PC games or your PC then also see our hub for commonly occurring PC errors and their fixes.