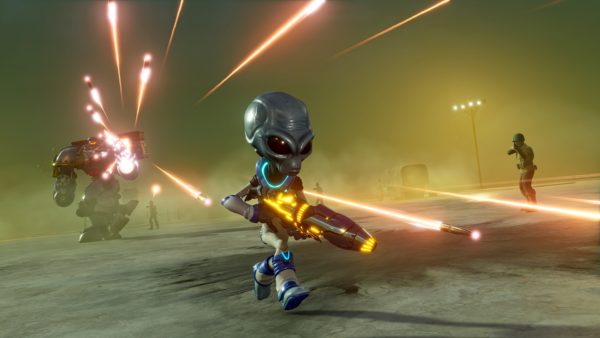 Destroy All Humans! is a remake of the classic game. While the remake might not be as good as RE2 Remake, the game is pretty good and well-optimized. Despite that, Destroy All Humans PC is facing issues like audio stuttering and distorting, crash at launch, black screen, and more.

According to the PC players, Destroy All Humans audio occasionally stutters and distorts. This issue might be because of v.sync. Disable in-game v.sync and close the game. Open Nvidia Control Panel > Manage 3D Settings > Program Settings > select Destroy All Human. Set Vertical sync to “On”. Apply the settings and the audio stuttering will be fixed for Destroy All Humans.

In case the audio continues to stutter or distort, then follow the steps I mentioned above but set Vertical sync to “Fast”. This will fix the audio stuttering issue with the game.

As for the audio distorting issue, open Settings > System > Sound > click “Sound Control panel”. A new window will open, select your active audio output device > properties > Advanced tab. This a bit of trial and error. Players will have to figure out which audio format will fix the audio distortion in Destroy All Humans.

Black Screen is a common issue with PC video games. Destroy All Humans! players are reporting that when they launch the game, they only get a black screen while they can hear the audio in the background.

This can be easily fixed. Launch Destroy All Humans and when the black screen appears, press “Alt + Enter” and the game will go into Windowed mode. The game will now be displayed properly. Go to the video settings and set the game’s resolution to your display’s native resolution or lower and you’ll be able to play Destroy All Humans in fullscreen.

If the above fix didn’t work then try updating your GPU drivers. Sometimes older drivers can cause issues with new games.

Destroy All Humans! PC players are reporting that the game just crashes as soon as it starts. Here are a few fixes and workarounds that might help you. First, make sure you have installed the latest GPU drivers.

If you are playing the game on a laptop, the reason for Destroy All Humans to crash at launch could be that the game isn’t switching to the dedicated GPU. Just make sure the game runs on the dedicated GPU instead of the integrated one and the crash at startup issue will be resolved.

For AMD GPUs, open Radeon Settings > Preferences > Additional Settings > Power > Switchable Graphics Application Settings. Select the game and select the “High-Performance profile” to the game under Graphics Settings. This will fix the game running on the integrated GPU issue.

If the above scenario doesn’t apply to you then chances are the game doesn’t have admin rights. Right-click the game’s exe > Properties > Compatibility tab > check “run this program as administrator”. Apply the change and Destroy All Humans should start working without crashing at launch.

In case the game is still crashing at launch, go to the game’s install folder and launch it directly from its exe file. If you get a similar error like “VCRUNTIME140.dll is missing” or “MSCVP140.dll is missing”, then it can be fixed by installing the latest Visual C++ Redistributables.

There is a possibility that your anti-virus/Windows Defender might be blocking the game’ exe or an important file. Either disable the anti-virus or exclude the game’s install folder from it. After that, verify game files and the crash at startup issue will be fixed.

Also, if you haven’t updated your OS then it might be the cause of the crash at startup. Destroy All Humans requires Windows 10 to be updated to the latest version to run properly. So, update your operating system if you haven’t already and the issue will be fixed for good.

Performance issues are quite common in PC video games. Partly because of the game’s optimization and partly because there are so many PC configurations.

First, install the latest GPU drivers. Then open Task Manager and make sure there is no background process using too much CPU, GPU, or HDD. If there is such a process then end it.

Apply these changes and the game’s performance will improve and the stuttering will be fixed. In case the performance hasn’t improved, then follow the steps I mentioned above but, set Vertical Syn to “Fast”.

Fast sync emulates G.sync as it allows the GPU to render as many frames as it can regardless of the display refresh rate. While it can improve performance and fix stuttering, it’ll only display as many frames as supported by the monitor.

Meaning, if the game is rendering at 90 FPS and the display is 60 Hz, then it’ll only display 60 FPS while the rest of the frames will be wasted. Also, Fast sync can significantly increase the GPU usage.

That is all for our Destroy All Humans fixes for errors like audio stutter, crash at startup, stuttering, black screen, and more. If you are facing errors and issues with other PC games or your PC then also see our hub for commonly occurring PC errors and their fixes.