Home Guides Destiny 2 Destiny 2 Trinity Ghoul Catalyst Guide – Where to Find, How to... 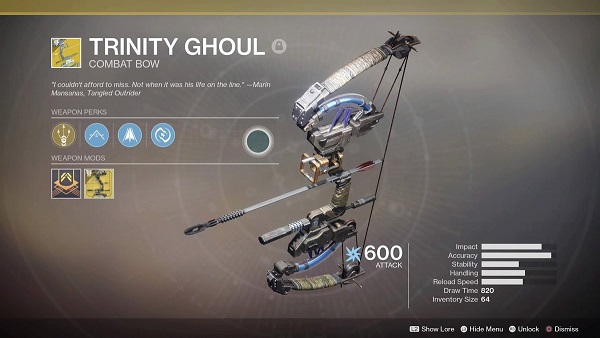 Trinity Ghoul in the game is an Exotic Energy Bow with two basic perks:

While perfectly useable as it is, Trinity Ghoul always felt lackluster in both PvE and PvP since it required players to have the best accuracy. The newly introduced catalyst for it in Season of Arrivals changes it substantially, making it a very viable option in any activity.

Before we talk about how to obtain the catalyst, let us talk about what it does. When fully masterworked with the catalyst, aside from the usual generating Orbs of Light on multikills, the catalyst also provides Trinity Ghoul the Forked Lightning perk. What this perk does is that it takes the Lightning Rod and improves it.

With the Forked Lightning active, the Lightning Rod triggers from any Arc damage final blows. While not confirmed, it also reduces Charge Time and Draw Time. If I am to explain it in simpler terms, the catalyst essentially turns the bow into Riskrunner.

It makes the weapon a whole lot better, especially in PvE where it originally struggled to clear adds effectively. With that said, let us talk about unlocking the catalyst itself.

How to Get Catalyst?

While the Witherhoard Catalyst has a questline attached to it, the one for Trinity Ghoul is found in the open world. People have reported finding it in different PvE activities, especially Vanguard Strikes and Gambit matches.

There are chances that you will find it while trying to complete your 3x Weekly Strikes for the Pinnacle. I found mine on my first Strike. After acquired, you will need to kill 400 enemies with it in order to complete it.

I would suggest going to Shuru Chi or Castellum in order to complete it effectively. Another good option is the Green Room in the Whisper of the Worm mission but it is time-gated.

This is how you can find and complete the Trinity Ghoul Catalyst in Destiny 2 Season of Arrivals. For more help on the game, you can check out our detailed Destiny 2 wiki guides.