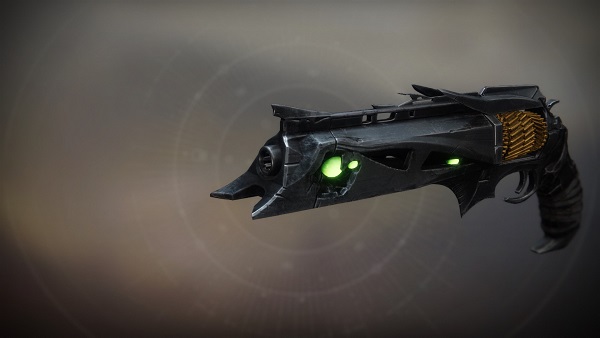 The Exotic Hand Cannon, Thorn, is one of the few legacy exotics that has found its way to Destiny 2. The lunacy of crucible when Thorn was used is well known by the original Destiny players. The fun and the agony caused by using Thorn to two-shot each other was the edge that everyone used. In this Destiny 2 Guide, we’ve detailed everything you need to know about completing the Thorn Exotic Quest.

The Thorn still has its damage over time perk called “Mark of Devourer” and the mag refill perk “Soul Devourer” in D2.

The enemies will keep dealing damage after you’ve shot them and if you manage to kill them they will drop fragments that will refill Thorn’s magazine.

However, for all this glory you have to complete an extensive questline, here’s how you can do it:

First, head towards the “Salt Mines” in EDZ. Keep heading deeper until there is a room completely filled with Fallen enemies. At this point, the path will swing right and crates along with platforms will flank you.

There would a Transmat Machine in this room that will help you teleport to a different location within EDZ.

Go down this path and there will be a huge energy field that would be blocking the road at the right. Going along the cliff edge, there’d be another small path towards your left.

If you keep going down the small path, there’d appear a ruined camp along with a burnt-out fire. Standing on this fire and then interacting with it will start the quest.

This step is pretty self-explanatory as the following script is mentioned with the popup of this object:

“Despite the burn damage, you recognize this weapon as a Thorn, a legendary weapon capable of severing Guardians from the Light. The Shadows of Yor, followers of an infamous Guardian-killer, are well-known for carrying Thorns. This one is broken, but you think it may be possible to fix it. A reputable (and discreet) gunsmith would know where to start.”

To complete the step, you simply need to bring the Ruined Thorn to Banshee-44 in the Tower.

Step #3 – Something Yet Remains

If you remember the Farm that was instantly forgotten after clearing the main story of Destiny 2. Now you have to go back there and then talk to the Cryptarch known as Tyra Karn. The quest description states:

“Your Thorn hums with the hungry indifference of the Void, but it lacks something essential. You know the original Thorn was intimately connected to the Hive, though you don’t know exactly how. Wandering around the Tower to ask your mentors about the provenance of a banned weapon strikes you as a bad idea, but — there are quieter places to ask questions. Places off the beaten path, where knowledgeable Cryptarchs have settled down to do their work in peace and quiet…”

You simply need to pay a visit to Tyra Karn at the Farm. The Farm is accessible via the EDZ director.

Completing the Escalation Protocol Waves, Titan kills in Crucible, and the Mars Bounties will award you 5, 3, and 5 Sapphire Wires respectively.

“Last on the list of Guardian-grade components is Sapphire Wire, another hard-to-come-by item formerly favored by Hunters because of its versatility. Sapphire Wire, like Plasteel Plating, was another casualty of the Red War… but you feel confident that you can scrounge some up.”

Step #5 – The Chasms of Scream

This step is better known as the Strike with the giant Floating eyeball boss. This is almost the same as the normal Strike but with the inclusion of a few active Strike modifiers and big Hive Knights.

There’d be modifiers such as Blackout, Iron, and Harsh Elements which means that there would be no radar and the enemy’s melees would be buffed, the enemies won’t stagger and you take more elemental damage.

The knights will keep appearing throughout the strike and another two will appear after the crystal in the time of the final boss fight. It would be easier for you to kill them first and then fight Savathun normally.

“While you were speaking to Tyra, she mentioned something called the Hated Path, a sort of primer to transform an ordinary Hand Cannon into a Thorn. Bathe your Light in horrors. Feed your weapon with death. Bind it with sickness. Horrors, death, sickness… that all sounds like the Hive nests on Titan to you.”

To complete this step, you’ve to complete Nightfall Strikes, kill Warlocks in the Crucible, and complete lo planetary bounties for collecting Hadronic Essence.

The Nightfall Strikes, Warlock Kills, and lo planetary bounties will award you 15, 3, and 5 Essence respectively.

“Banshee has recommended a number of rare components that you should be able to use to restore your ruined Thorn to working order. First on the list is Hadronic Essence, a dense lattice of exotic baryons and mesons, once commonly favored as an infusion in Warlock fieldweave.”

To complete the Steel, you’d have to complete Heroic (Tier Four) Blind Well rounds, kills Hunters in the Crucible, and complete Titan bounties in order to collect Plasteel Plating.

“Next on the list of required components is Plasteel Plating, a durable hybrid plastic favored by Titans for its balance of strength and workability. Plasteel is not commonly available for artisan use these days: the Red War wiped out the DIY supply chain within the City.”

To complete the final step, you need to defeat Guardians in the Crucible using Void energy or Hand Cannons. Precision streaks using Void Hand Cannons grant the most efficient progress.

Do note that progress is multiplied in the Iron Banner or in Competitive Crucible matches.

“Your project is going well. The gun is now mechanically sound, but it is simply a gun: it has no intrinsic power of its own. You’ll need to reconnect it to the Light somehow, and the vast dark secrets of the Void seem like the most promising route.”

The following are some tips that will help you while doing this quest step:

Once done, you’ll have your Shiny new Thorn ready to be tested in the Destiny 2 Crucible. For more on Destiny 2, be sure to check out our Legendary Sundial Guide, Devil’s Ruin Exotic Guide, and Garden of Salvation Raid Guide.