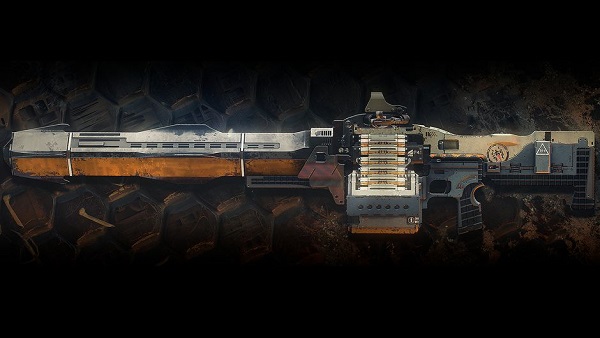 Before we talk about the acquiring the Exotic Quest and completing it, let’s discuss the perks that come with Xenophage in Shadowkeep.

Xenophage’s Pyrotoxin Rounds hit like a truck despite the weapon having less ammunition as compared to something like a 21% Delirium or Thunderlord’s. The weapon also has a slower rate of fire compared to other weapons in its category but the raw DPS makes up for it.

With that out of the way, let’s talk about how you can unlock Xenophage Exotic Heavy Machinegun in Destiny 2.

1. Interact with the Statues

To start the Xenophage quest, the first thing you need to do is to head over to Eris Morn on the Moon and head inside the Memory portal that appears right next to her. If you’re unable to see the Memory portal, it means you haven’t turned in a Memory quest. Do so and it should appear immediately after.

If you don’t want to do an additional quest, you need to head over to the Scarlet Keep via Sorrow’s Harbor – it should be on the north side of the area. Continue straight into the Scarlet Keep and head left as soon as you come across some rocks glowing green.

Keep on going until you arrive at the Enduring Abyss. Don’t drop into the next area and look for a hole in the right-side wall. Go through the hole and after a while you should find yourself in a room with 4 statues. You need to interact with all the statues in the room to spawn a chest with the first step of the Journey Exotic Quest, which will reward you with the Xenophage.

Once inside, you should find an Orb of Light behind some machines. You need to pick the Orb of Light up and light 6 ritual plates in the vicinity. This must be done in under a minute – the timer resets to 1 minutes after each successful torch lit so it’s not that hard. Even then, it’s a good idea to know where the plates are before attempting it. I’d also suggest putting on your best Mobility gear e.g. St0mp-E55, Transversive Steps, etc.

You can also check out this near, little video that shows the locations of all the ritual plates you need to light for the Emergence step:

To complete this step of the Journey Exotic Quest, you need to collect a total of 4 Path Fragments, one in each of the Lost Sectors on the Moon. To find the Path Finders, you need to clear the Moon Lost Sectors by defeating the boss and finding a puzzle wall at the end.

The puzzle wall is basically 9 symbols on the walls – like the one you can find on Hive Symbol Chests. Shooting a symbol will change it so it’s advised to follow the solutions provided below because to reset the puzzle, you’ll have to exit the Lost Sector and re-enter. Here’s the solution of each Lost Sector puzzle:

A small tip: shooting the same symbol 4 times will bring it back to the original. But it’s still better to follow the solutions above.

To complete the “Path Uncovered” step of the Journey Exotic Quest in Shadowkeep, you’ll need to launch the Pit of Heresy, the newest dungeon in the game. Continue through the dungeon till you encounter your first mini-boss followed by a small jumping section.

During the jumping section, you need to head inside the top-left door to receive the next step titled “Discovery”. I should also mention it here that anyone from your Fireteam can head through the door and you’ll receive the quest step – it doesn’t have to be you.

While in the Pit of Heresy dungeon, continue forward until you come across a large, open area with massive ledge. In this area, you’ll find a plate that will spawn three floating Hive platforms in the air. You need to jump through these Hive platforms to pick up an Orb of Light and bring it to a Hive gate (with braziers nearby) in a nearby tunnel – hug the right wall to get to it.

Similar to what you did in the “Emergence” step, you’ll need to light up two ritual plates to get the next step, which is to slay the dungeon’s final boss.

To complete this step, you simply need to defeat the final boss of the Destiny 2 Shadowkeep dungeon. After you arrive in the boss area, you should see a total of 4 elemental orbs in it. Each of these orbs corresponds to a damage type:

Each player in the Fireteam will receive a “Dread” buff/debuff and he/she must grab the middle orb and take it to the corresponding slot in the room. If done correctly, you’ll be able to damage the boss for 20 seconds but only using the weapon for which you had the “Dread” buff/debuff. For instance, if you had the Thunderous Dread, you’ll only be able to deal damage to the boss using an Arc weapon/ability.

Keeping this in mind, it’s a good idea to keep a mix of different elements and subclasses. Keep on doing the same thing explained above to defeat the Volmâr, the Tempted.

Once you’re done with the Pit of Heresy dungeon, you’ll need to return to Eris Morn on the Moon to receive the Xenophage Exotic Machinegun for the Journey quest in D2 Shadowkeep.

This is pretty much all we’ve got in our Destiny 2 Shadowkeep Journey Exotic Quest Guide. If we missed anything, be sure to let us know in the comments section below!