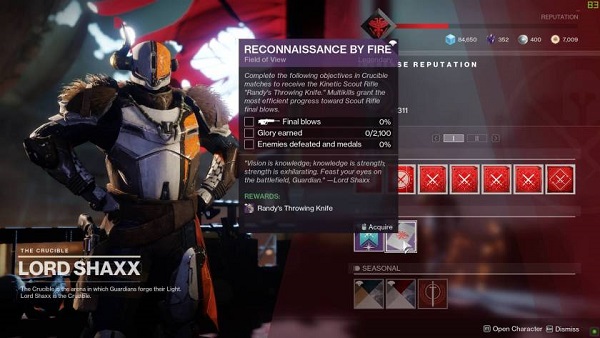 Randy’s Throwing Knife is a Crucible Ritual Scout Rifle. Before we talk about obtaining and complete its quest, let’s check the perks it comes with:

To pick up the quest for Randy’s Throwing Knife, you need to head over to the Tower and go to Lord Shaxx – he’s near the Vaults. Speak to Lord Shaxx and get the Field of View quest. Since it’s a Crucible Ritual Weapon, the time it will take you to unlock the weapon depends on your PvP skills. You’ll need to do the following in order to unlock Randy’s Throwing Knife Ritual Weapon in Shadowkeep:

I should also mention it here that multi-kills with Scout Rifles grant the most efficient progress toward Scout Rifle final blows. Thanks to changes made to Competitive Crucible Playlist, reaching Fabled as a solo player is now easier than ever. If you’re half-decent and have a good loadout, this step shouldn’t take you long.

Once you’ve satisfied all the aforementioned conditions, return to Lord Shaxx in the Tower and speak to him to receive Randy’s Throwing Knife Kinetic Scout Rifle.