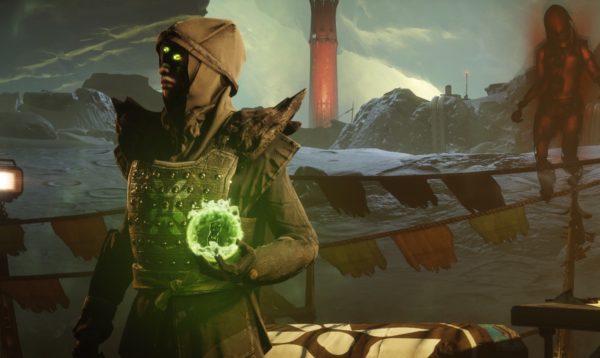 Destiny 2 Shadowkeep Lectern of Enchantment Guide will help you with all of the Moon Essence weapon parts locations to create the powerful Moon weapons.

Playing Destiny 2 Shadowkeep you’ll come across Lectern of Enchantment which can be used to create powerful weapons. You just have to build the first version of every Moon weapon and you can form multiple weapons.

However, building the first version is the tricky part as you need to find weapon pieces for that. That is where our Destiny 2 Shadowkeep Lectern of Enchantment Guide comes in to help you find all Moon Essence Weapon parts.

Love and Death – Bound Manacle Location
Travel to Gatehouse and for that, travel to Hellmouth and go in the direction of black building on the lunar surface. There will be a green glow coming from a doorway in the hall. Enter here and follow the path until you reach Gatehouse.

Here you’ll find a Hive Knight in the center of the arena. Just defeat this enemy and he’ll drop Bound Manacle.

A Fine Memorial – Ethereal Charms Location
Travel to Anchor of Light and go right to the large door. Kill enemies as you go down into the Moon. Eventually, you’ll reach the Temple of Crota. You’ll enter a large room where a lantern will be buried in the floor. This is the room after the spiral staircase.

Look around for a broken platform with a pile of trach behind it. Here you’ll find the Ethereal Charms in Destiny 2 Shadowkeep.

Every Waking Moment – Withered Plumes Location
Go to Moon’s underground through any entrance. You need to go to Circle of Bones which is basically a nexus connecting all of the tunnels. Once there, look into the pit in front of you and take the path to the right along the railway. Defeat the Hive enemies here and you’ll find the Withered Plumes on a ledge.

Tranquility – Horned Wreath Location
For this one too, go to Circle of Bones, it’s a nexus connecting all of the tunnels. Look to the pit and go right through the door and keep following the path.

Once you reach the room that splits into thirds, look for dark steps that’ll be leading into the Moon. Go down this path until you find an Unstoppable Ogre. Use an Unstoppable weapon to defeat it. After that, find the Horned Wreath at the back of the cave.

Loud Lullaby – Necromantic Strand Location
Go into the Moon through Archer’s Line and keep following the path until you reach a circular area with a Wizard. There is a spiked piece of cover coming from the ground and Necromantic Strand is at the base of it.

Night Terror – Ralniks’ Hatchet Location
Make your way to Anchor of Light and enter the giant Fallen ship to the east. Move ahead until you find a Fallen Captain. Defeat him and he’ll drop Ralniks’ Hatchet.

Arc Logic – Captive Cord Location
Go to Sorrow’s Harbor and go to the southeast exit. It’s a large bridge and proceed through the battleground and into the first Moon area. To your right is a large building and the Captive Cord is right next to the wall.

That is all for our Destiny 2 Shadowkeep Lectern of Enchantment Guide with tips on where to find Moon Essence Weapon parts. This guide is a work in progress, we’ll update with more weapon part locations as we find them.