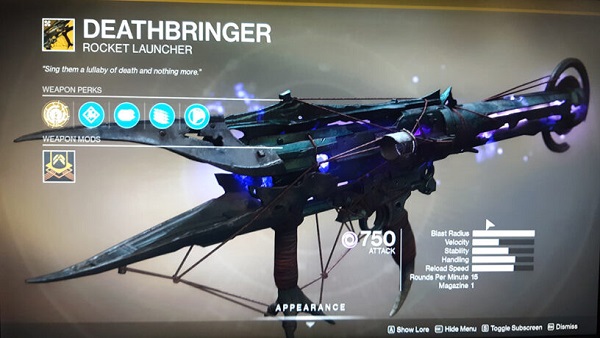 Well, Bungie is free from the shackles of Activision and brings us a free to play Destiny 2 and a brand new major update, Shadowkeep. Destiny 2 Shadowkeep comes with its own slew of new exotic weapons for our Guardians of light. There is both good and bad news for Destiny 2 players here. The new exotics are available for you to get right now, which is good news. Meanwhile, some new exotic weapons are locked behind the Season of the Underlying Season pass.

Information regarding these new Destiny exotic weapons is still a bit limited but there is enough we know about them to bring you this guide. In our Destiny 2 Shadowkeep Exotics guide we will reveal the process of getting these exotic weapons, their perks, buffs, abilities, damage, and more.

Keep in mind that Shadowkeep must be bought separately from the base game. It comes with the Season of the Underlying.

As per our information, we can confirm that there are three armor pieces for each class in Destiny 2. There is an exotic armor piece for Titan, another for Warlock, and one for our Hunters. While we will update this guide as we play Shadowkeep and more information for you, we are pretty much sure that there are at least 7 new exotic weapons introduced with Destiny 2.

This exotic submachine has a weird name and sounds like something the developers may have used as a placeholder but than just decided to go with it. $Machinegun0.Name$ only has one perk.

Pyroxitin Rounds –  This weapon is capable of firing high-powered explosive ammunition that deals significant damage to the enemy.

How to  Get – Xenophage Exotic Quest

The holy grain of energy weapons is here in the form of Divinity Exotic weapon in Destiny 2. The weapon shoots a laser beam that hunts for the souls of your enemies.    There are two perks for Divinity exotic and both add to the devastation of this exotic weapon.

Judgment – Target the enemy and deal sustained damage that weakens and disrupts them.

Penance –  Targets under the effects of Judgement long enough are struck with a burst of damage.

How to Get – To be updated

The Deathbringer is not just intimidating by name, it is a killer weapon that truely brings death to your enemy’s doorsteps.   It looks weird, trademark Bungie design. There are two perks that come with Deathbringer.

Dark Deliverance: The exotic weapon is able to fire remotely detonated projectiles that drop void orbs on your enemies.

Dark Descent: Throw the void orb as far as possible to have a more powerful detonation. Distance is tied to the power of the explosion.

How to Get: Check out our Deathbringer Exotic Quest Guide for more help on how to get it.

This Hand Cannon is one of the most useful ones and the good thing is it comes with the season pass. You get the Shadowkeep expansion and you’ll have access to this weapon.

Looks Can Kill – The weapon is able to fire shield piercing ammunition and it comes with a scope to help you hit the target better.

Death at First Glance – Bonus damage when you are aiming down sights on the first shot. This bonus is preserved if the shot deals with precision damage or strikes an elemental shield.

How to Get –  Shadowkeep expansion pass unlock. If you do not have the expansion then you can get the weapon when you hit level 35 of the battle pass.

This is something that is highly useful during the PvP matches. It comes with a single PvP focused perk.

Vanishing Execution –  Defeating a Guardian with a melee attack or a combatant with a finisher grants invisibility and restores a portion of health and shields.

How to Get – I was able to get this from Icora after completing the Shadowkeep campaign.

This is one of the most powerful exotic weapons in the game and it should be your priority to get it in Destiny 2 as it has a lot of impact and range. For the time being, we do not have any additional details about this exotic weapon. We’ll update the article soon with details.

Another armor piece is called Phoenix Cradle. It is a leg armor with 750 defense and a decent mobility score. It only comes with a single perk.

Beacons of Empowerment – Sun Warrior lasts twice as long. Allies who pass through your Sunspots are granted Sun Warrior.

How to Get – Random drop (we’ll double-check for confirmation)

This marks the end of our Destiny 2 Shadowkeep Exotics guide. If you need more help check out our Shadowkeep armor 2.0, and new Light Campaign guide.