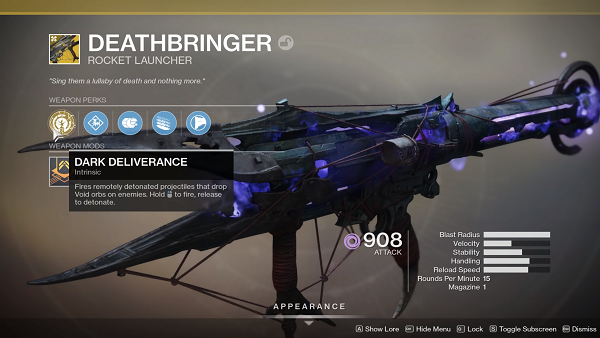 Our Destiny 2 Shadowkeep Deathbringer Exotic Questline Guide will detail all the steps you need to complete to unlock the Deathbringer rocket launcher in the game. Deathbringer, the Exotic Rocket Launcher, is Void energy weapon that’s excellent for multi-target DPS as well as single-target DPS with a Void singed.

It also tracks targets, making it an interesting choice in PVP. Deathbringer is different from other Rocket Launchers in Destiny 2 in the sense that it requires you to hold the fire button to shoot it and then release the fire button to detonate the Void projectiles that it shoots – think of it as an upper-tree Nova Bomb. Here’s how you can get your hands on Deathbringer Exotic in Destiny 2 Shadowkeep:

You should consider completing the Shadowkeep’s main campaign before attempting this. You should also try to be at least Power Level 900 or higher since the Deathbringer will always drop as a +5 Powerful Reward than your highest potential Power Level. If you don’t care about wasting a Powerful Reward, then start it whenever you want!

Reaching Power Level 900, however, isn’t hard at all and can be reached in an hour or so. Check out our Power Leveling Guide to learn more about it. With that out of the way, here’s is how you can complete the Deathbringer Exotic Quest in D2 Shadowkeep:

The reason why I asked you to complete the main campaign of Destiny 2 Shadowkeep is to unlock some Weekly Bounties from Eris Morn. One of these Weekly Bounties is the Lunar Spelunker, which requires you to clear three of the four Lost Sectors on Moon to receive the Firewall Data Fragment and the Memory of Sai Mota.

After acquiring the Firewall Data Fragment and the Memory of Sai Mota, clear the K1 Revelation Lost Sector in Sorrow’s Harbor and instead of taking the main exit out of the Lost Sector, jump onto a fence-platform on the right-side to find a locked glass door.

You need to drop the Firewall Data Fragment here and interact with the console inside to receive Sai Mota’s Broken Necklace.

Use your weapons to weaken the Nightmares and then use your Arc abilities to finish them off. I should also mention it here that Nightmares killed by your Fireteam doesn’t grant any progress – it’s a step that needs to be done solo. After collecting 20x Necklace Scraps, head to Eris at the Sanctuary.

For this step, you need to find Eris Morn inside a portal where she normally is. Speaking to her will grant you a +3 Powerful Kinetic Sniper Rifle and Symphony of Death questline. To start the questline, head to the Circle of Bones in the Hellmouth.

This is a pretty straightforward mission – just kill everything in sight to complete it. Once done, speak with Eris Morn to receive the Tainted Lullaby quest step.

This step for Deathbringer questline requires you to complete a Public Event (Heroic or Normal) in the Hellmouth region, clear the K1 Revelation Lost Sector in Sorrow Harbor (again), and defeat a Bone Collector enemy. The first two steps are pretty straightforward. As for the Bone Collector, you’ll find it in the Anchor of Light.

We aren’t 100% sure as to what triggers the Bone Collector to appear but you should look for it in the Fallen base area to the left of where you enter the Anchor of Light from Sanctuary.

This step requires you to load the Scarlet Keep strike from the Director and kill Sulmakta, High Conductor near the end. Once that’s done, you’ll need to kill a lot of enemies – A LOT. Here’s a quick rundown:

You can kill them anywhere on the Solar System but doing it on the Moon grants the most progress. Once again, Sorrow’s Harbor is the place where you need to be.

7. Choir of the Damned Quest

To pick up this quest, you need to head to the Circle of Bones in the Hellmouth where you picked up the Symphony of the Death questline during Step #4. This Power Level 920 mission requires you to break the shields of Wizards and stop their Deathsong, which will wipe you if not stopped in 60 seconds. After killing the Deathsinger, return to Eris Morn to complete the questline and receive the Deathbringer Exotic Rocket Launcher in Destiny 2 Shadowkeep.

This is all we’ve in our Destiny 2 Shadowkeep Deathbringer Exotic Quest Guide. If you’re looking for more Shadowkeep content, be sure to check out our Armor 2.0 Guide, Exotics Guide, and Upgrade Materials Guide.