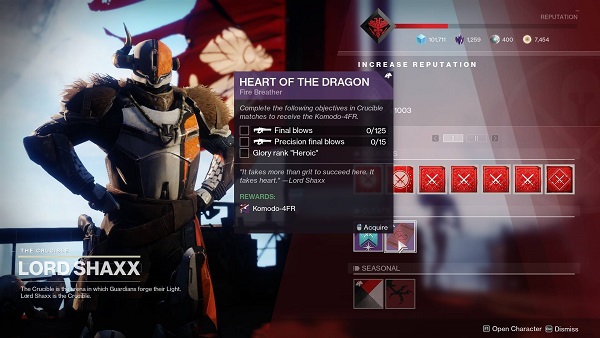 With the release of D2 Shadowkeep, Bungie did away with the game’s Pinnacle Weapons in the favor of a new line of Legendaries called Ritual Weapons. Similar to Exit Strategy, Randy’s Throwing Knife, and Edgewise from Season of the Undying, the new Season of Dawn also features 3 new Ritual Weapons from Commander Zavala, Lord Shaxx, and Drifter. In our Destiny 2 Komodo-4FR Ritual Weapon Guide, we’ll walk you through everything you need to know about acquiring the Crucible Ritual Weapon in Season of Dawn.

Komodo-4FR in Destiny 2 Shadowkeep a Solar Linear Fusion Rifle in the Power Weapon slot. To start the weapon’s questline, you need to head over to the Tower and speak with Lord Shaxx near the Vaults to acquire “Heart of the Dragon” questline.

Unlike Randy’s Throwing Knife, completing the “Heart of the Dragon” to unlock the Komodo-4FR Ritual Weapon is fairly easy. To do so, you need to complete the following objectives:

While you can perform the first 2 objectives in any Crucible Playlist, I recommend heading into Freelancer Survival (Competitive Playlist) and use any Linear Fusion Rifle you’re comfortable with. By doing so, you’ll work toward all the objectives at the same time. And while you can go with any Linear Fusion Rifle you’re good at, I recommend giving Arbalest a go since it was recently buffed.

As for reaching “Heroic” in the Competitive Crucible Playlist, try to solo grind toward it in the Freelancer Survival unless you’ve a decent enough fireteam. Keep grinding and you’ll get it in no time. With that out of the way, return to Lord Shaxx and he’ll reward you with your new Komodo-4FR Linear Fusion Rifle in D2 Season of Dawn. Here are the weapon’s stats and perks: