Home Guides Destiny 2 Destiny 2 Season of Dawn Sundial Guide – How to Complete, All... 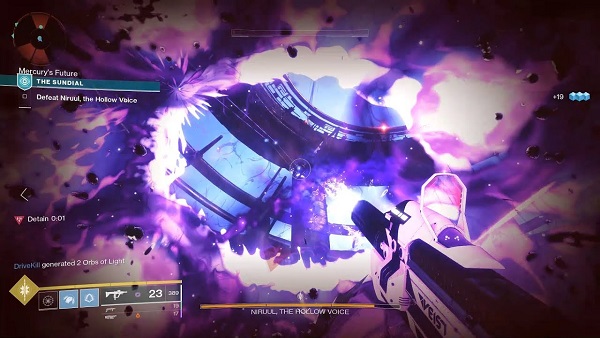 With the release of Season of Dawn in Destiny 2 Shadowkeep, Bungie has introduced a new six-man activity on Mercury, something between Vex Offensive and Menagerie. Sundial in Season of Dawn features matchmaking and rewards a variety of new weapons, armor, exotics, and shaders. In our Destiny 2 Sundial Guide, we’ve detailed everything you need to know about unlocking the activity and completing its various encounters.

In order to unlock Sundial and the Lantern of Osiris (Seasonal Artifact) in Season of Dawn, you need to head over to the Tower and speak with Ikora Ray to receive the “A Matter of Time” questline. Here’s a quick rundown of everything you need to do to unlock Sundial on Mercury – all of them can be done in under 20 minutes:

I also recommend doing everything on the Tangled Shore since you’ll need to return there anyway. The part where you’re required to gather the Sundial Components is shared with other players.

With the new reset, the Legendary Sundial activity has been added to the game as well. You can check out our guide on how it is different from the regular version and how to complete it.

How to Complete Sundial Encounters?

Similar to Menagerie, the encounters in Sundial keep on going even if you fail one. Aside from this, the activity has a Time Trial mode and has been confirmed to have rotating bosses each week so make sure to return to the page for more info. on other bosses.

Here’s a quick rundown of all encounters that you’ll go through in Sundial:

1. Datamine
In Datamine, you’ll need to stand on plates while clearing ads. If an enemy manages to get on a plate, the progress for it will halt.

During the encounter, Psion Commanders will spawn inside bubbles – usually on high platforms. They will also halt your progress, therefore, get off your plate and punch them.

After each plate, a boss will spawn whom you’ll have to kill. After all 3 plates have been cleansed, the encounter will finish.

2. Gatecrash
During the encounter, you’ll encounter 3 Vex Minotaur. Defeating them will cause them to drop charges that you must deposit at the designated stations. Once all the charges have been deposited, a boss will spawn. Kill the boss to complete the encounter.

3. Bombardment
During the Bombardment encounter, you’ll face off against a shielded Centurion boss. In order to drop its shield, you’ll need to defeat the Solar Centurion who will drop a beacon.

You need to pick this beacon up and throw it at the immune boss.

This will call in an airstrike that will damage the boss’ immunity shield. You need to continue doing this until its shield is completely depleted.

Once done, all that’s left is to defeat the boss to complete the encounter.

4. Niruul, The Hollow Voice Boss
This is a pretty straightforward boss fight. Once the encounter starts, start dealing damage to the boss until she becomes immune.

At this point, you’ll need to scour the area to find a Psion Commander inside a bubble and melee it.

During the encounter, she will randomly trap one of your fireteam members inside a purple cage. Simply shooting the cage at its weakspot will free the “detained” player. This is pretty much all there’s to the fight. Continue to repeat the same steps above and you’ll defeat her in no time.

I should also mention it here that the Time Trial for this week is really easy so make sure to give it a go.

This is all we’ve got in our Destiny 2 Season of Dawn Sundial Guide. For more on the Season of Dawn, be sure to check out our Komodo-4FR Guide, Buzzard Guide, and Python Guide.