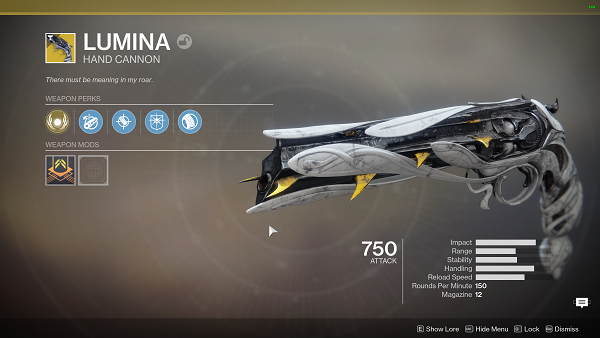 It seems like Bungie is, at last, trying to make dedicated Healers/Supports more viable in Destiny 2. It started off with Dawnblade’s Attunement of Grace tree which essentially revolves around healing and empowering allies. The most recent Exotic Quest for D2 Annual Pass owners in the Season of Opulence is for an Exotic Hand Cannon named Lumina. Let’s talk about everything you need to do in order to unlock Lumina in Destiny 2: Forsaken, complete quest steps, and weapon perks it comes with.

In a nutshell, Lumina is all about healing and empowering your fireteam as evident from its weapon perks. Lumina quest is fairly elaborate, comprising of multiple steps that you need to complete in order to unlock it. But before we get to that, let’s talk about Lumina weapon perks:

Noble Rounds
Kills with this weapon leave Remnants. Absorbing a Remnant converts your next hipfired shot into an ally-seeking Noble Round and partially refills the magazine.

Blessing of the Sky
Using a Noble Round on an ally heals them and grants both you and them a weapon damage bonus for a short duration.

You should already be able to tell that Lumina will be fairly powerful in both PvP and PvE. When playing in a full fireteam, it could potentially serve as a mobile Healing/Empowering Rift, allowing you to empower your teammates in Crucible for some easy one-shot potential. With that out of the way, let’s talk about Destiny 2 Lumina Quest steps:

To locate the Transmat, you need to head over to Trostland landing zone on European Dead Zone (EDZ) and head a little north toward the Salt Mines. Continue into the mines and you should be able to spot the Transmat. Interact with the Transmat to teleport to a new location with a purple barrier nearby.

What you’re looking for is a chest with “A Fateful Gift” quest step inside. If you’ve already done the ‘Thorn’ quest, the chest is in the Pile of Ashes – exactly where you find Thorn. If you haven’t done the ‘Thorn’ quest, move alongside the broken railing near the purple barrier and you should see a small opening in the rocks above. A few leaves cover so it can be a little hard to see.

Once you’re inside the alcove, go all the way to the back to find the chest with the next quest step.

This step is on a timer (approx. an hour) and is subject to change. If it expires, head over to Werner to pick it up again. As for the chest itself, it can spawn in a few different locations. I’ve listed all the known locations as of now but do note that your chest can spawn somewhere else too though I find it highly unlikely. Regardless, I’ll continue to update this page with more locations.

Chest Location #1 – Sector 13 EDZ
Head inside Shaft 13 Lost Sector on EDZ and it should appear in one of the rooms upstairs.

Chest Location #3 – Spine of Keras, Dreaming City
Another location where the chest can spawn is in Spine of Keras in the Dreaming City. You need to get to the highest bridge in the area and jump off to one of the islands. The chest should be right next to a tree. You can also check the map location below, courtesy of Astraeus023: 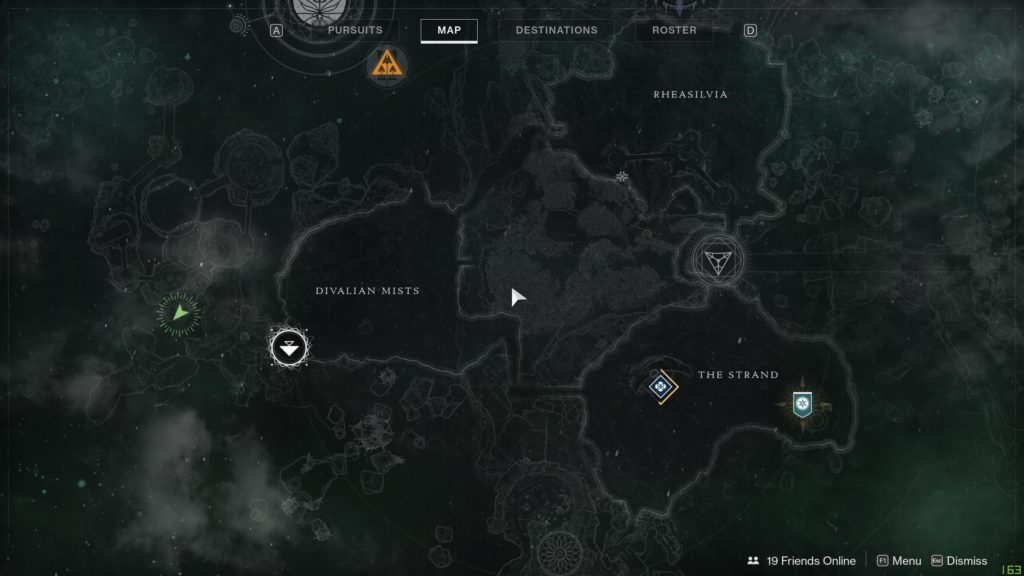 Chest Location #4 – Sinking Docks, Titan
If you’re still unlucky, head over to Sinking Docks on Titan. You need to head over to the area where you chase the thief in Thief of Thieves Adventure. It should be below the stairs on the right side. Check the image, courtesy of Monthius: 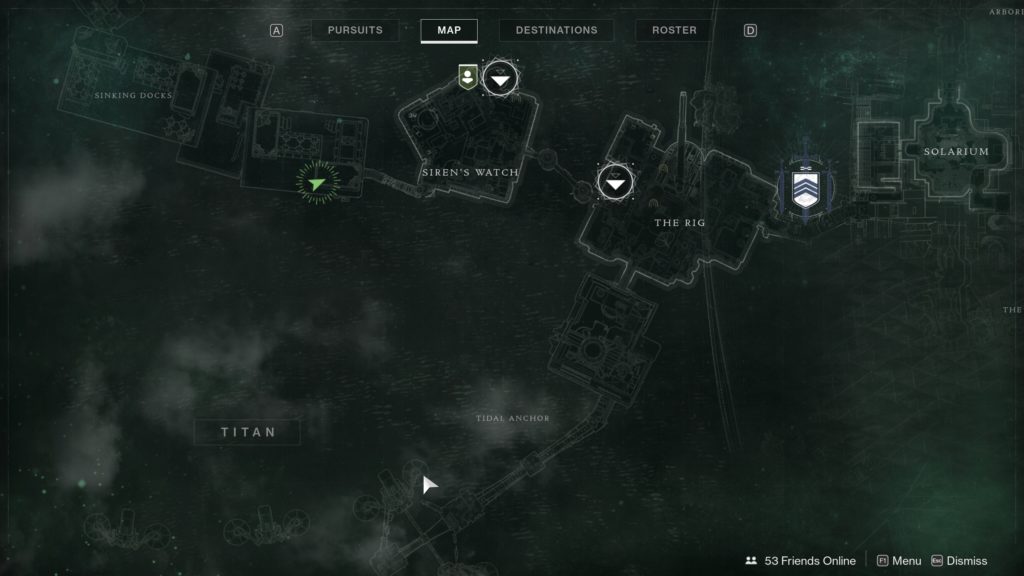 Chest Location #5 – Excavation Site, Io
You need to head over to Excavation Site 2 on Io and go as far as you can toward a large glass window at the end of a room. The chest should appear there.

Chest Location #6 – The Mists, Nessus
You need to go to The Mists on Nessus, the place where the Insight Terminus takes place. Continue to follow the path until you come to a room with a gap in the center. Jump over the gap and get to the right side of the area. A little ahead, jump down to come across a hidden area you can get in. Continue to follow the path and you’ll find the chest at the end.

Chest Location #7 – Alton Dynamo
You can also get a chest from Alton Dynamo. When you’re asked to go to the server room or the Valkyrie Forge, head left into the first room. Once inside, head up the vent where you can also find a Memory Node and head to the opposite side of the room’s entrance to find the chest.

Chest Location #8 – Mercury
The chest can also spawn on little side areas on Mercury during Public Events – near the Region Chest. You should be able to access it while triggering the Heroic Public Event though some classes should be able to make it without the need to turn the event into Heroic. You can also check the image, courtesy of TooBoo4U: 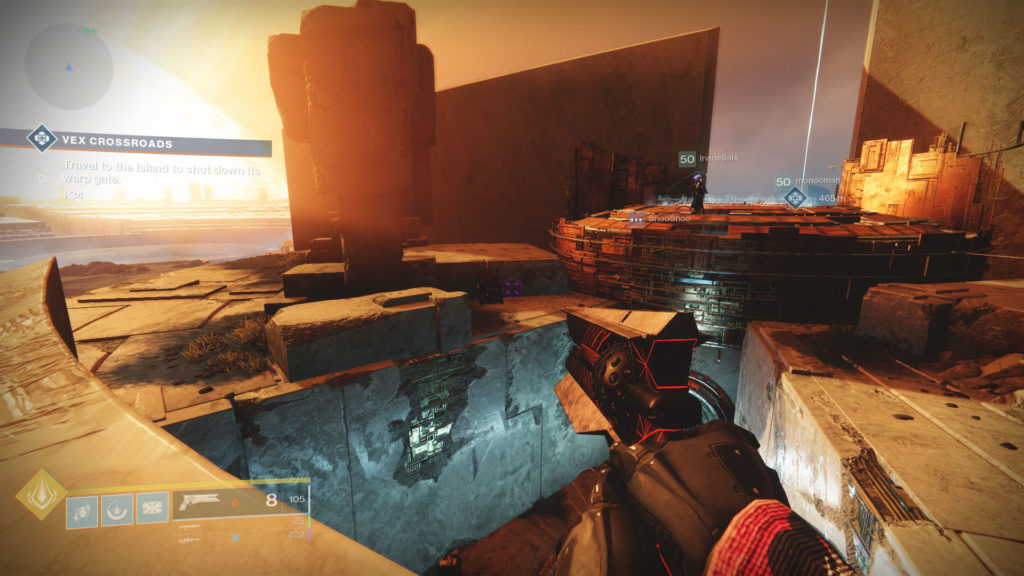 As you can tell, there are a lot of places where the chest can spawn. As I mentioned earlier, I’ll continue to add more locations as the community discovers them.

For this step, you’re required to generate 250 Orbs of Light. This one is fairly simple! All you need to do is to grab your favorite Masterwork Weapon, start Blind Well, and kill everything in sight. Try to play with a fireteam to do it even faster.

At this point, you’ll receive the Rose Hand Cannon which transforms into Lumina. Alongside Rose, you’ll also receive three quest steps which, upon completion, will unlock Rose’s weapon perks. These quest steps are:

Band Together is fairly easy! You need to have the 2.5x bonus, check the singes, and use Blackout, Extinguish, and MatchGame for easy 50K. Make sure to complete the Nightfall and don’t leave after hitting 50K. As for Defend the Light, you can use Riskrunner with Phoenix if you’re a Warlock or just use Huckleberry if you have it. Finally, for Face the Hordes, just run Heroic Blind Wells and chain kills.

For this one, you can do anything you want with Rose equipped: bounties, Strikes, etc. However, if you want to speed things up, start up the Lake of Shadows, only kill the door mini-bosses, kill the boss at the end, repeat. You can also run Menagerie with six Guardians with Rose for 35% per run or the Volundr Black Forge with three people for 12% but the Lake of Shadows is easily the fastest method.

For this step, you need to generate 35 Orbs of Light, get upto 100% Guardian kills with a Hand Cannon, and defeat Invaders in Gambit before they kill any of your teammates.

Generating 35 Orbs of Light is a no-brainer. Just head into Blind Well and complete it. For the second step, start Quick Play in Crucible and rack kills with a Hand Cannon. It shouldn’t take you more than 3-4 matches if you’re an average PvP player. You can also use Rose to speed up the process. Where other Hand Cannons give 1%, Rose gives 4% so it’s worth a try!

Finally, for the Gambit part, you can message the other team that you’re trying to get Lumina. If they’re good or trying to get Lumina themselves, this step should become a breeze. Do note that you only need 1 kill within 10 seconds of any invasion. If they invade you, kill them before they kill any of your teammates. If you’re feeding the invader, just invade and don’t kill anyone on the opposing team.

Since the quest just appeared, people are more than welcome to help. Have faith in the community!

For the final step of the Lumina quest, you need to shoot 11 crystals floating in the air (there are plenty for everyone in the fireteam) with Rose in the Will of the Thousands strike. Once you’re done shooting 11 crystals with Rose, simply kill Xol for the Rose to be consumed by it and obtain Lumina in return.

This is pretty much all there’s to Lumina Exotic Quest in Destiny 2: Forsaken. Heal away, Guardians!