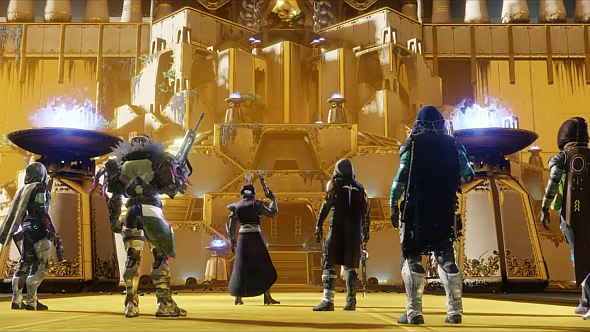 The Leviathan Raid is the first one in Destiny 2 and you should check it out if you are new to the game. This Destiny 2 Leviathan Raid Guide will help you through each of the trials that you need to complete in order get to Emperor Calus.

The following are the different trails of the Destiny 2 Leviathan Raid and how you can complete them all.

This is the opening area of the Destiny 2 Leviathan Raid. You will come here at the start and between the different trials that you need to complete and even before facing off against Calus. You’ll spawn at the edge of the ship along with the rest of the team. Go up the ramps and then through the door. Keep going down the halls until you reach Castellum.

To solve the Castellum puzzle, the team needs to split up and gather Standards. Go to the front room by the great door with the sun logo on the ground and you’ll trigger an encounter. Now you need to split up. Four players have to play the role of Defenders and have to defend the point while two players, Adventurers, have to claim objectives.

Adventurers
The Adventurers need to stay in constant communication to learn which symbol is being displayed. Once the Adventurers know the symbol, they have to claim the corresponding Standard. But first, you need to clear the area and defeat Standard Bearer, who isn’t easy to take down.

Once the Standard Bearer is defeated, the standard will spawn. Pick it up and take it back to the defenders and lock it in the place. Your damage will increase which will be helpful in defeating the enemies.

Head to the next standard and each location is identified with a symbol. The first one we did was Sun and the following are the rest of them and you need to repeat this procedure with all of them.

Defenders
The Defenders, on the other hand, have a relatively simple objective but the execution of that objective can be tricky. The Defenders just need to survive while the Adventurers go on to grab the Standard.

The Defenders will face the Standard Liberator, who will come and take away the Standard that Adventurers brought back with them. So this enemy has to be your priority because you’ll lose your progress.

Also, you need to keep an eye on the Loyalty Councilor as it comes in an impenetrable bubble. The only way to defeat this boos is one of the defenders has to leave and melee him one or two times. Otherwise, this enemy will only make Standard Liberator immune to damage. Once all three standards have been delivered, the doors will open to the next challenge.

Here your fireteam needs to be split into two groups of three. Once groups of players will go to the left and the other group will go to the right. Two players on each team will stand on the nearby podium and remember don’t touch the water and get ready to jump on the orb.

One floater will go in the middle room and get ready to jump on the middle Orb platform. The other floater can stand between his two teammates.

All of the players will jump on the platform at the same time. The chains will start to move and a Bather will come out. Players will attack these Bathers and will try to take them out as soon as possible. The Floater can help his/her teammates to eliminate the Bather. 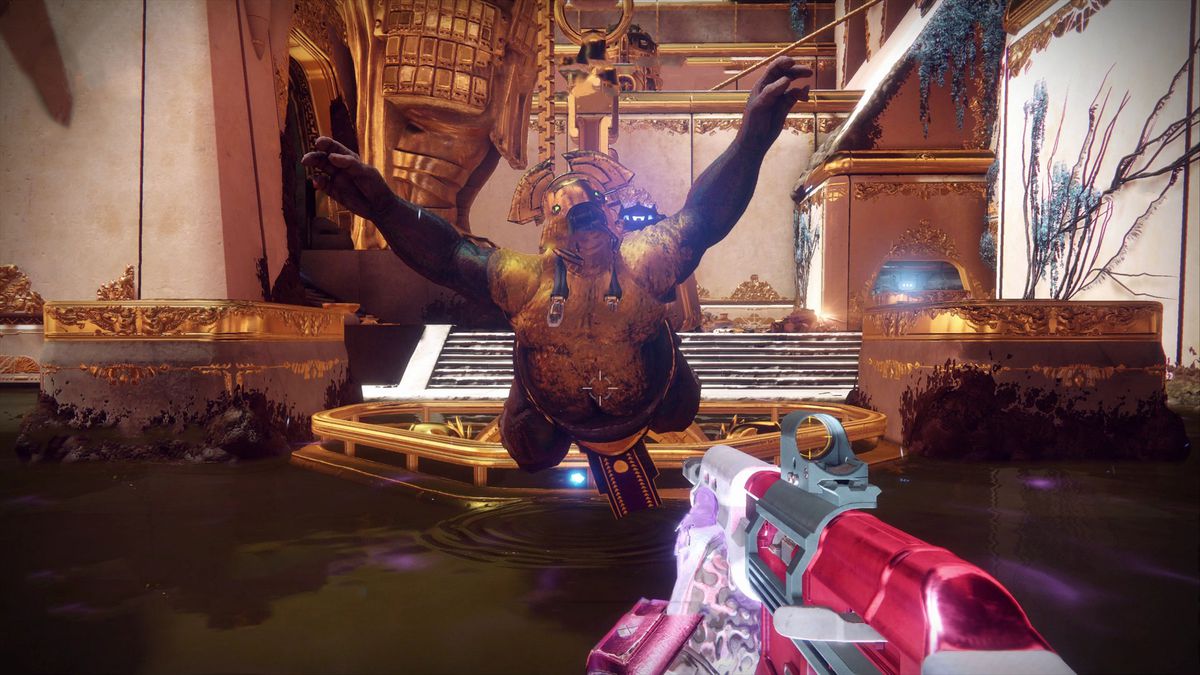 The Floater will then jump onto the platform with the teammate who had the first Bather. While the first one goes to the central room to refresh the buff by picking the spawned orb. The floater has to survive while the rest of the teammates get ready to leave.

The third floater now needs to get the central Orb buff and then help the original floater. Continue this until all “Soaps” are locked at the water level. Clear the first wave and the bathers and make sure everyone is alive.

For the second phase, the fire team again splits into two teams. One team will stand in the central podium and shoot at purple lanterns. Remember, players can only damage the lantern while standing in the central podium. As soon as your Orb buff goes down to 5x, jump off that point otherwise, the spawned counselor will kill you.

The other group of three need to protect the players in the central podium while they shoot the purple lanterns. Stay on the edges where it’s safe and kill enemies as they spawn. Repeat his process until the Purple Lanterns in the middle room are destroyed.

As you enter the Pleasure Gardens, clear the are of the enemies. After that, follow the marker to the foot of the big gold statue. Two players have to pick up the prism weapons and after that, the trap door will open.

The remaining four players will drop down the open door and collect the Royal Spores. These four players will await the instruction of the players with Prism weapons on top. The area outside is now occupied by Royal Beasts and you must avoid detection from them otherwise, they’ll howl and will close the room.

Now, you need to kill these Royal Beasts but, they have a lot of health and you won’t be able to kill them without acquiring buffs. What you need to do is pick up damage modifiers by gathering the four Spore-carriers around a glowing flower. The players with prism weapons on top will shoot the flower with their weapon from the glowing platform above. 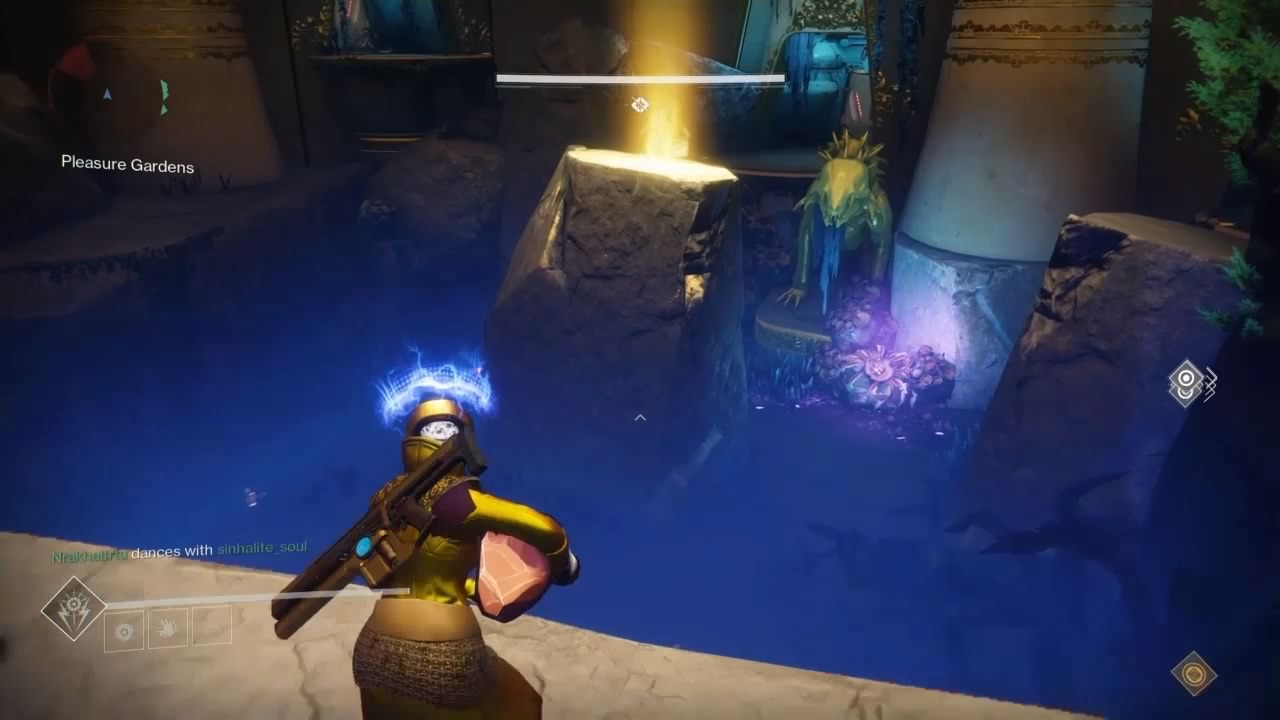 After a successful buff, some enemies will spawn on the ledges that Prism weapon holders must defeat. Also, the prism Weapon only works if the player is standing in the beams of light on the rocks above. Repeat this until at least you have a 48x damage buff.

When you have stacked enough damage buff, go and kill the Royal beasts. However, if the beasts detect you or you fail to kill them, they’ll howl and you have 30 seconds to get back to the safe room until it closes. if you fail to reach the room, all of the players will die.

Also, this can only happen three times before the entire Pleasure Gardens resets and you have to start all over again. You need to repeat the process 3 times and the Royal beats will be defeated and a loot chest will spawn.

For this trial, two players will be the runners and the raiming four are the shooters. The shooter will take their place at each of the podiums while the runners will be at the portals near the Chalice and Dogs podiums.

Once everyone is at their position, enemies will spawn and you need to defeat a yellow bar enemy at each podium. After that, orbs will appear at chevrons by the Chalice and Dog podiums. The Runners will pick up the orbs and will be transported to inside the ring.

This is an obstacle course for the runners. The Runners have to run while collecting orbs from holes in the obstacles in their way. Before the runner can pick up the orb in the wall, the runner will communicate the rows which don’t have the red orb.

Meaning if the red orb is in the middle row, then the runner will call out the top and bottom rows. With this information, two players outside will be dedicated to the runners and will shoot the chevrons outside tp open the wall. 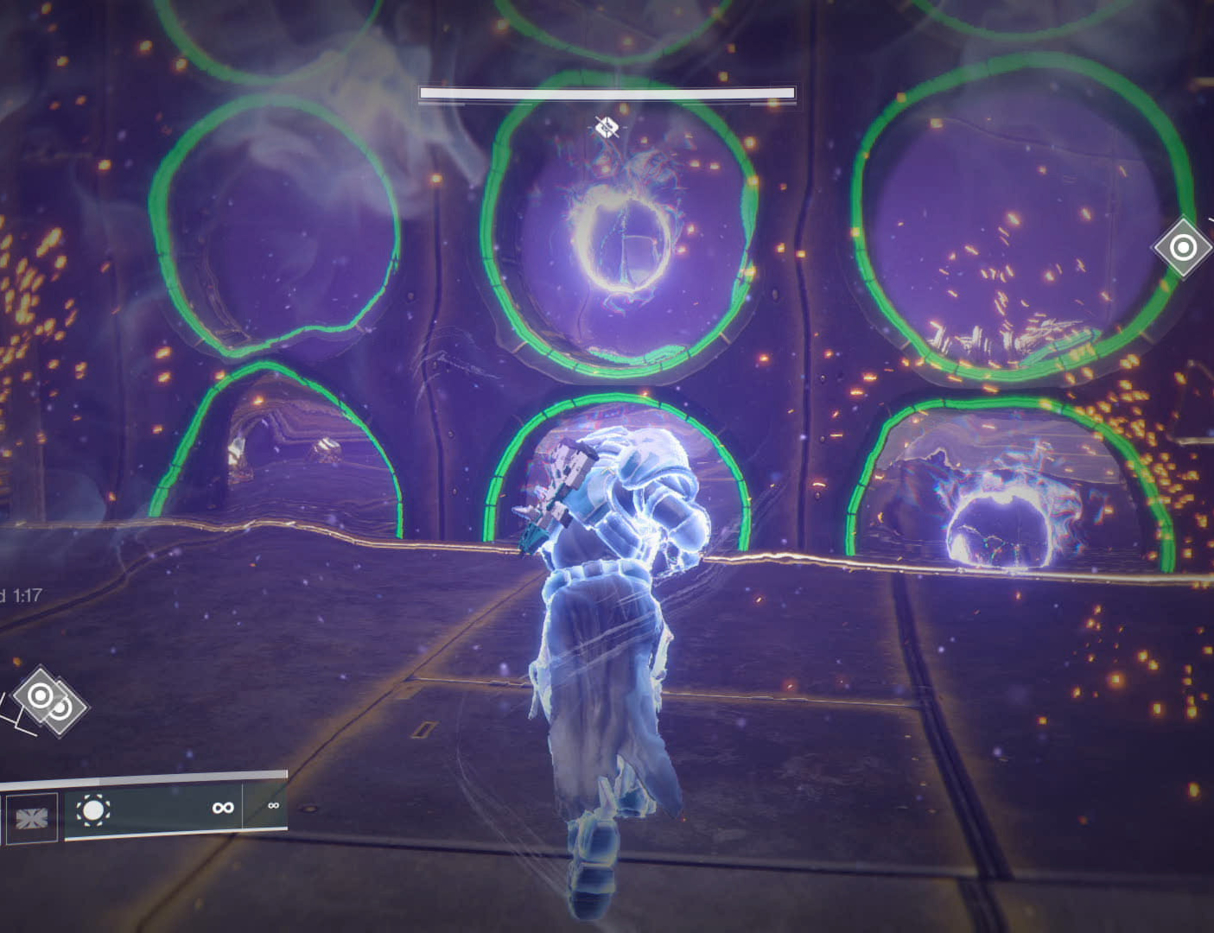 Once that is done, the runner must pick the red orb and continue running. If the runner misses a single orb, more Councilors will spawn that the players will need to deal with. if the runner doesn’t pick the orbs at all then the entire team will be wiped.

Once the runner finishes the course, he has to run to the room in the middle of the arena and put the or in the socket. You need to repeat this process until six orbs have been placed in the sockets.

Once sic orbs are in the socket, every player has to run and get an orb. The players will be transported to a tougher version of the course. However, only three players need to make it to the end but only four orbs will spawn in each hole.

Players will have to manage when they can miss an orb and by alternating, all of the players can make it to the end. After three players have reached the end and placed the orbs in the sockets, the challenge completes.

As you reach the throne room, you have to clear waves of enemies while dodging the fire from Emperor Calus above. At one point, Councillors will spawn above four plates. You need to ignore them for now.

All 6 players will then be transported to another dimension and there are three orbs there. Three players will pick those orbs to return to the Throne Room whole the three will remain in the alternate dimension or shadow dimension.

This process needs to be repeated which is calling out symbols and defeating enemies on both sides. After four attempts or four walls, Emperor Calus will shoot dark heads which must be destroyed as they’ll build up the damage modifier, so shoot as many as you can. 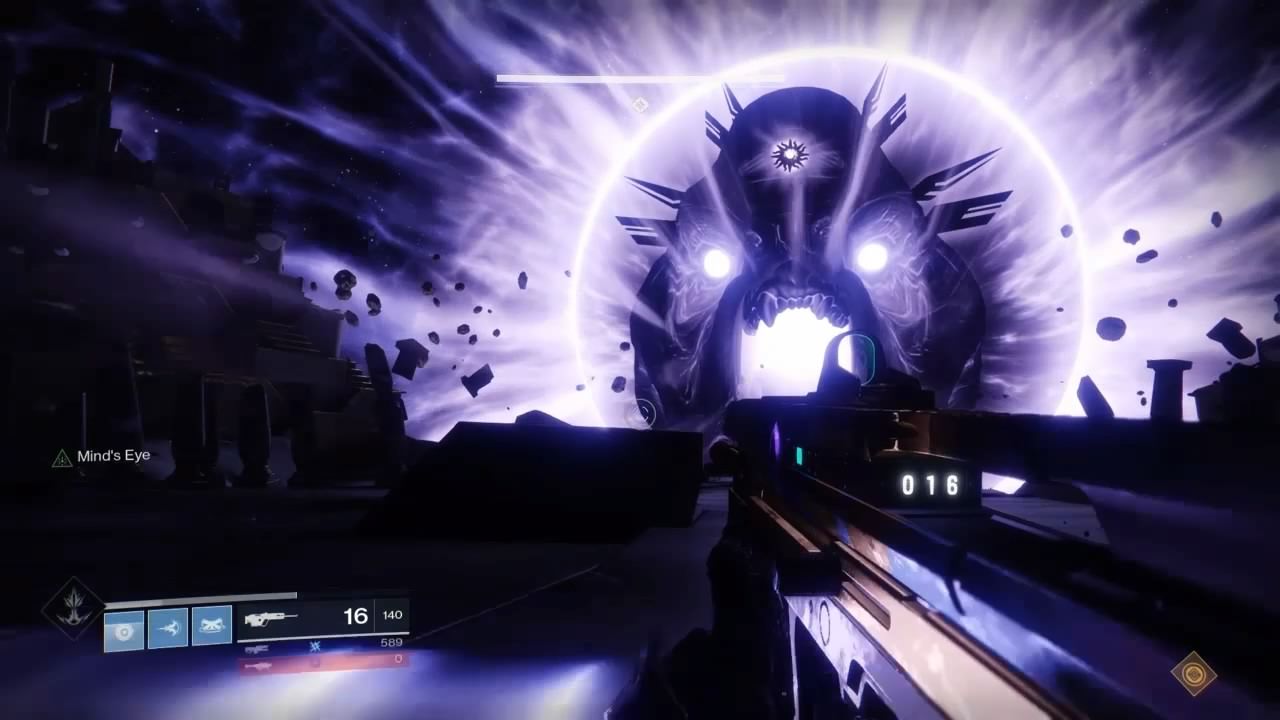 In the throne room, players will have to shoot down the shield that Calus is generating but in the process, their own health will start to reduce. Players must keep a balance between letting the shield generate long enough that they don’t die.

Not only that, there is a hidden time limit and you need to do it in 60 seconds. After this, three orbs will appear in the shadow dimension that players will grab and return to the Throne Room. All six players must stand on one of the plates and attack Calus.

When Claus starts to attack, switch to another plate and continue shooting at him. Once you have used all four plates, the process will repeat and each time a third of his health is gone, his animations will change. Also, his weak spot will emerge on his stomach from time to time.

When his health is completely gone, a damage phase will start. Shoot at him with everything you got and use your beast weapons that deal the most damage. Once he’s dead, you’ll get a ton of loot.

That is all for our Destiny 2 Leviathan Raid guide with tips on how to complete each of the trials. If you are interested in learning more about the game then you can check out our Exotic Catalysts Guide. If you have bought the Destiny 2 Shadowkeep expansion then you should also check out our guide that covers how you can complete the Garden Of Salvation Raid.