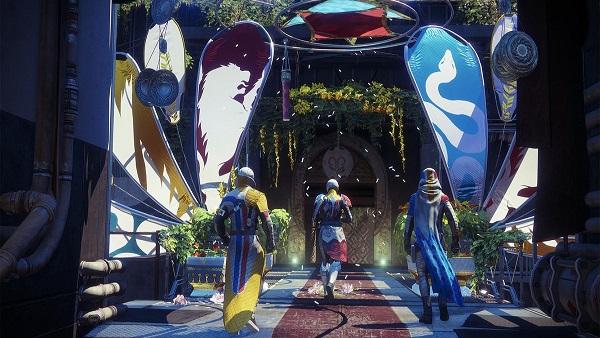 A large portion of Guardian Games is just turning in Medals and collecting Laurels. You need Laurels to be able to earn the new exotic Ghost Shell (it comes with Speed Demon and Guiding Light) and complete various triumphs to unlock the Heir Apparent exotic HMG. In this guide, we’ll go over everything you need to know about farming Laurels in Destiny 2 Guardian Games.

Unless something changes in future, to earn Laurels, you or your allies need to defeat enemies or guardians with abilities – grenade, melee, and super. However, you must be equipped with your class item (obtained from Eva Levante) to earn them so make sure you’ve it on at all times.

When dropped, Laurels look like colored motes. You must pick them up as they drop since they don’t go to the Postmaster if you leave them – this doesn’t happen in Crucible.

Warlocks drop yellow Laurels, Hunters drop blue Laurels, and Titans drop red ones. Picking a Laurel from your own class adds 3 points to your score and picking up a Laurel from another class only adds 1 point.

This is something you should keep in mind if you’re playing with people using different subclasses. Now that we know what Laurels are, let’s talk about some of the best ways of farming them in D2.

Before we start talking about the best places to farm Laurels for the Guardian Games, let’s take a look at some of the builds which will benefit you a lot.

Where to Farm Laurels?

If you’re a solo player, I’d recommend running one of the builds mentioned above and get to the green room in Heroic Whisper mission. If you manage to get there with around 10-15 minutes remaining, you’ll be able to farm a lot of Laurels since the adds never cease to spawn. This way, you won’t only farm a lot of Laurels but will also complete a lot of your bounties/medals.

This is all we’ve got in our Guardian Games Laurels farming guide. For more on the game, you can refer to our Destiny 2 wiki guides.