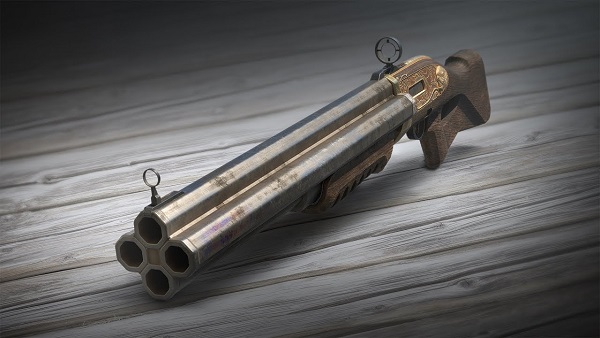 Destiny 2 Season of the Worthy The Fourth Horseman

1. Enter the Vault
First of all, you’ll need to enter Commander Zavala’s office in the Tower. It’s akin to something we did back when unlocking Leviathan’s Breath exotic bow.

To get to his office, jump down onto the fenced walkway from in front of Eververse and Postmaster. Once you’re on the walkway down, go straight and head right to drop down another set of stairs. Once you’re all the way down, turn left and you’ll find yourself in front of the office door. There are a lot of cool Easter Eggs that you can find in this room including:

However, what you’re looking for is to find the secret vault. To find it, head down the stairs and into a vent directly underneath the stairs. From there, keep on following the normal path until you get to a walkway with orange lights and some pipes on both sides. After getting out of this walkway, head left, and jump on the shelf on the right side into another vent.

Keep on going straight and drop down from the end, head up the stairs, head left, and into the vault … only to find The Fourth Horseman missing from the vault. If you want to video instructions, check the video below:

2. Missing in Action
Upon learning that the exotic shotgun is missing from the vault in Zavala’s office, return to him and inform him all about it.

3. Fresh Lead
For this step, you’ll need to fly over to Hellas Basin on Mars and talk to Ana Bray about the missing weapon.

5. Return to Ana
Once you’re done, return to Ana Bray on Hellas Basin to learn more about the next steps.

6. In the Shadows
To complete this step, you’ll need to defeat Psions and open Cabal chests on Mars to collect 50 pieces of data.

I’d recommend pulling out the Eris Morn Ghost Shell with the Treasure Hunt perk and head into the Ma’adim Subterrane Lost Sector to get done with this step quickly and easily.

7. Under our Nose
Once you’re done, you’ll need to fly over to Annex landing zone in the Tower and speak with Benedict 99-40, Emperor Calus’ vendor in the Tower.

9. Rein It In
Once you’ve collected 1,000 Encryption Signals, return to Benedict 99-40 in the Tower Annex to learn about the final step for unlocking The Fourth Horseman exotic shotgun.

10. Lost and Found
For the final step, you’ll need to complete The Quarry Legendary Lost Sector in Sunken Isles, EDZ. Do note that the Legendary Lost Sectors in Destiny 2 contain Champions and require 1,000 Light Level, therefore, try to bring a competent Fireteam. After killing the final boss in the Lost Sector, you’ll receive The Fourth Horseman.

The following are all the exotic perks, stats, and catalyst bonuses that you can get with The Fourth Horseman. Do note that in order to complete the catalyst, you’ll need to defeat 300 enemies with the weapon.

As for the weapon’s stats, these are: