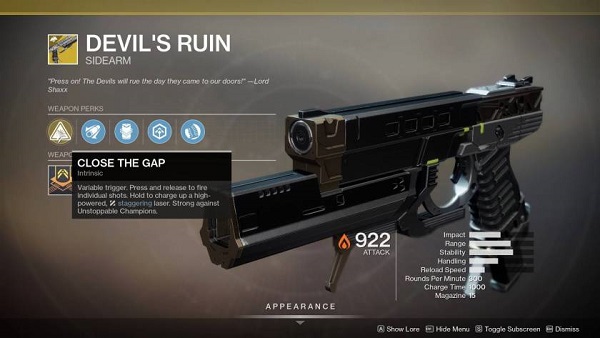 A Lost Relic Exotic Quest Guide will help you complete the entire questline to acquire Devil’s Ruin Exotic Sidearm in Destiny 2 Season of Dawn. Similar to other exotic quests in the game, it’s a multi-step quest that has you complete various objectives throughout the solar system – Joke.

Devil’s Ruin is a 300 RPM Solar sidearm with a clip size of 15. Akin to Divinity from Garden of Salvation raid, Devil’s Ruin has an intrinsic perk that makes it strong against Champions.

Before we get to starting A Lost Relic quest and completing it, let’s look at its perks:

In order to acquire the quest for Devil’s Ruin in D2, you’ll need to complete a run of Sundial – Heroic or Normal. For more info. on it, feel free to check out our detailed guide. Completing the Legend Sundial will reward you with a new Timelost Weapon Fragment but what to do with it?

With the Timelost Weapon Fragment in hand, you need to head over to the Tower. Once there, head to the “Hangar” and speak with Saint-14 – he should be near Amanda Holliday. Learn more about it from the legendary Titan and move onto the next step.

Step #3 – A Tour through History

To complete this step, you’ll need to head over to European Dead Zone (EDZ) and go toward the Twilight Gap region. What you’re looking for are some Lost Weapon Fragments, which you’ll receive after the completion of a quest called “Parts Long Lost”.

Collect 10 Timelost Fragments. These are all scattered around the Twilight Gap. The progress is fireteam shared so if one of your fireteam members acquires one, you’ll all get it. Once you’ve found all 10, you’ll receive the weapon.

This has to be arguably the worst Exotic Quest in Destiny’s history. Period!

This is how you can complete A Lost Relic exotic quest to acquire the Devil’s Ruin in Destiny 2 Season of Dawn.